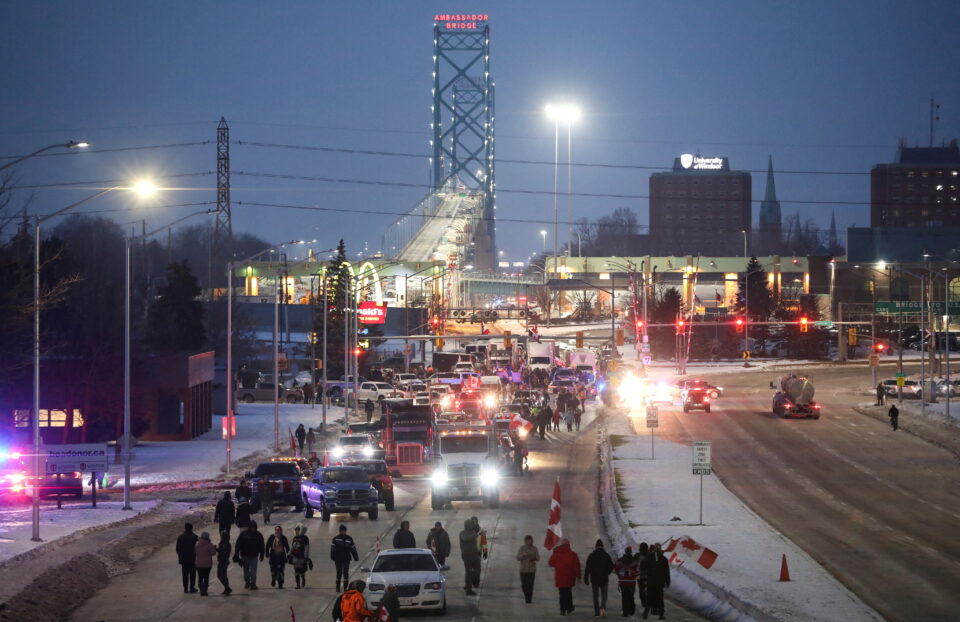 Vehicles block the route leading from the Ambassador Bridge, linking Detroit and Windsor, as truckers and their supporters continue to protest against the coronavirus disease (COVID-19) vaccine mandates, in Windsor, Ontario, Canada February 8, 2022. REUTERS/Carlos Osorio

The busiest land crossing from the United States to Canada remained shut on Tuesday after Canadian truckers blocked lanes on Monday to protest their government’s pandemic control measures.

While traffic in both directions was initially blocked, U.S.-bound lanes have since reopened, Windsor Police tweeted. Canadian police also said late on Tuesday another border crossing at Coutts, Alberta, had been shut down by protesters for inbound and outbound traffic.

Ottawa Deputy Police Chief Steve Bell told reporters on Tuesday that police have immobilized many of the heavy vehicles taking part in the blockade. He said about a quarter of the 418 protest vehicles in the downtown have children in them, and police are concerned for their welfare in relation to cold, noise, carbon monoxide risks and access to sanitation.

Canada‘s Public Safety Minister Marco Mendicino told reporters that he had been in touch with the mayor of Windsor and local legislators about the blockade at the Ambassador Bridge, connecting Detroit, Michigan, with Windsor, Ontario.

“We will continue to work…so that we can keep the supply chains moving across the Ambassador Bridge, as well as the wheels of our economy turning,” he said.

Canada sends 75% of its exports to the United States, and the bridge usually handles around 8,000 trucks a day.

“It is clear these disruptions have broadened in scope beyond the vaccine requirement implementation,” White House press secretary Jen Psaki said. “We are of course in touch with our Canadian counterparts” on the blockade, Psaki added.

The owner of the bridge, the Detroit International Bridge Co, said international commerce on the bridge needed to resume as quickly as possible in a manner that reflects mutual respect, the company’s chairman, Matt Moroun, said in a statement.

The president of the Canadian Vehicle Manufacturers’ Association called for an immediate end to the blockade, saying “persistent delays at the Ambassador Bridge risk disrupting automotive production that employs tens of thousands of Canadians.”

Canadian Prime Minister Justin Trudeau appeared in public on Monday for the first time in more than a week after being infected with COVID-19, saying the protest had to stop. Trudeau reiterated on Tuesday that “we’re going to continue to follow the science” when interim Conservative leader Candice Bergen asked Trudeau in parliament whether he will follow the science and end the restrictions quickly.

Trudeau has denounced the demonstrators’ tactics but one of his Liberal Party colleagues has broken rank on the government’s hardline stance on vaccine mandates. Joel Lightbound called on the government to move away from divisive politics and present a clear roadmap for lifting pandemic restrictions.

Quebec Premier Francois Legault also announced on Tuesday a gradual reopening of the province’s offices, businesses, bars and social activities through March 14, while lifting restrictions on the number of visitors allowed in private homes.

Legault said a recent protest by truckers in Quebec City did not influence his plans, but acknowledged that some people in the French-language province were fed up with the restrictions.

Saskatchewan Premier Scott Moe said the requirement to provide proof of vaccination or a negative COVID-19 test for businesses, workplaces and other public venues will end on Feb. 14.