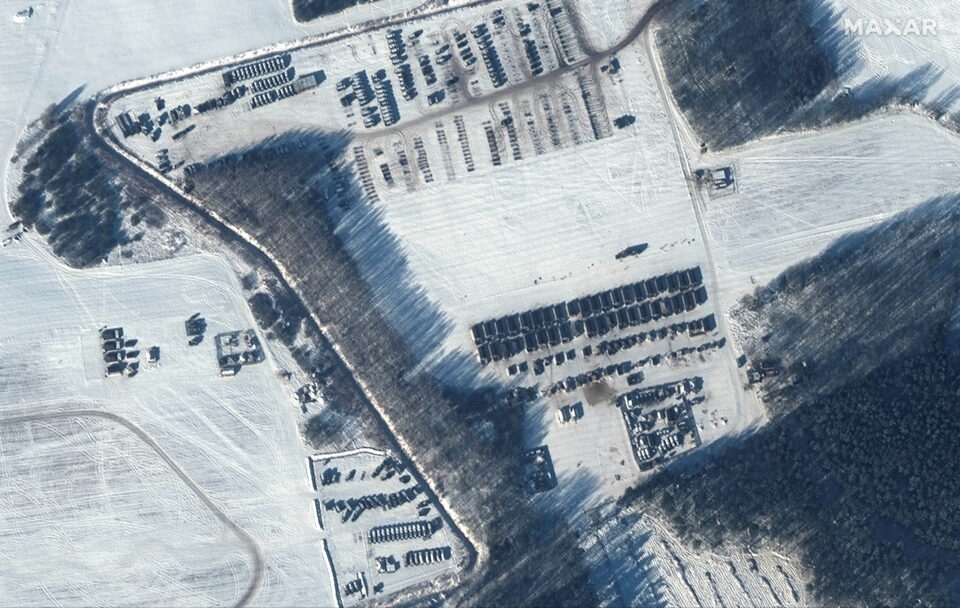 A satellite image shows a troop housing area and a vehicle park in Rechitsa, Belarus, February 4, 2022. Picture taken February 4, 2022. Maxar Technologies/Handout via REUTERS THIS IMAGE HAS BEEN SUPPLIED BY A THIRD PARTY. NO RESALES. NO ARCHIVES. MANDATORY CREDIT. DO NOT OBSCURE LOGO

Britain said on Thursday the West could face the “most dangerous moment” in its standoff with Moscow in the next few days, as Russia held military exercises in Belarus and the Black Sea following its troop buildup near Ukraine.

In a new round of diplomacy, Britain’s foreign minister sparred publicly with Russia‘s top diplomat at talks in Moscow, Johnson visited NATO headquarters in Brussels and officials from Russia, Ukraine, Germany and France were due to meet in Berlin to discuss the conflict in eastern Ukraine.

Russia, which has more than 100,000 troops near Ukraine’s borders, denies Western accusations that it may be planning to invade its former Soviet neighbour, though it says it could take unspecified “military-technical” action unless demands are met.

“I honestly don’t think a decision has yet been taken” by Moscow on whether to attack, Johnson told a news conference with NATO Secretary-General Jens Stoltenberg in Brussels. “But that doesn’t mean that it is impossible that something absolutely disastrous could happen very soon indeed.”

“This is probably the most dangerous moment, I would say, in the course of the next few days, in what is the biggest security crisis that Europe has faced for decades, and we’ve got to get it right. And I think that the combination of sanctions and military resolve, plus diplomacy is what is in order.”

Stoltenberg also said it was a dangerous moment for European security, adding: “The number of Russian forces is going up. The warning time for a possible attack is going down.”

In a new point of friction, Ukraine criticised Russian naval exercises that it said made navigation in the Black Sea and Sea of Azov “virtually impossible”.

Visiting Moscow, British Foreign Secretary Liz Truss was upbraided by Russian Foreign Minister Sergei Lavrov at a joint news conference in which he accused her of grandstanding and refusing to listen.

“I’m honestly disappointed that what we have is a conversation between a dumb and a deaf person…Our most detailed explanations fell on unprepared soil,” the 71-year-old veteran diplomat told reporters.

“They say Russia is waiting until the ground freezes like a stone so its tanks can easily cross into Ukrainian territory. I think the ground was like that today with our British colleagues, from which numerous facts that we produced bounced off.”

Truss, who warned of tough Western sanctions if Ukraine was attacked, challenged Lavrov directly over his assertion that Russia is not threatening anyone with its build-up of troops and weaponry near Ukraine’s borders.

“I can’t see any other reason for having 100,000 troops stationed on the border, apart from to threaten Ukraine. And if Russia is serious about diplomacy, they need to remove those troops and desist from the threats,” she said.

Lavrov said that Moscow favoured diplomacy to resolve the crisis.

Truss’s talks in Moscow follow shuttle diplomacy from French President Emmanuel Macron, who visited Moscow and Kyiv earlier this week. In contrast to U.S. and British leaders, Macron has played down the likelihood of a Russian invasion soon.

Russia has used the tensions to seek security concessions from the West that would include a promise never to admit Ukraine to NATO and halt the military alliance’s expansion.

The EU said on Thursday it had delivered a single letter in response to Russia‘s proposals to member states on European security, on behalf of the 27 foreign ministers of the bloc.

NATO and the United States have already portrayed Russia‘s main demands as non-starters.

After the initial phase of the joint drills was announced last month, Russia held a briefing for military attachés that lasted just eight minutes, and gave notice of an exercise that was already under way, a senior U.S. state department official said.

Ukraine launched its own war games on Thursday which, like Russia‘s joint drills with Minsk, will run until Feb. 20.

The Ukrainian forces, whose numbers have not been disclosed, are set to use Bayraktar drones and anti-tank Javelin and NLAW missiles provided by foreign partners. Kyiv was due to receive a further shipment of U.S. military aid later on Thursday.

Despite the tension over the war games, the Kremlin’s point man on Ukraine, Dmitry Kozak, was set to meet officials from Ukraine, Germany and France in Berlin for the latest talks on the conflict in eastern Ukraine.

Ukrainian Foreign Minister Dmytro Kuleba said the talks would be important and that he hoped they could get a Trilateral Contact Group on the conflict in east Ukraine functioning again. The group includes Russia, Ukraine and the Organization for Security and Cooperation in Europe, a security watchdog.

Medical association says crooked doctors the exception, not the rule