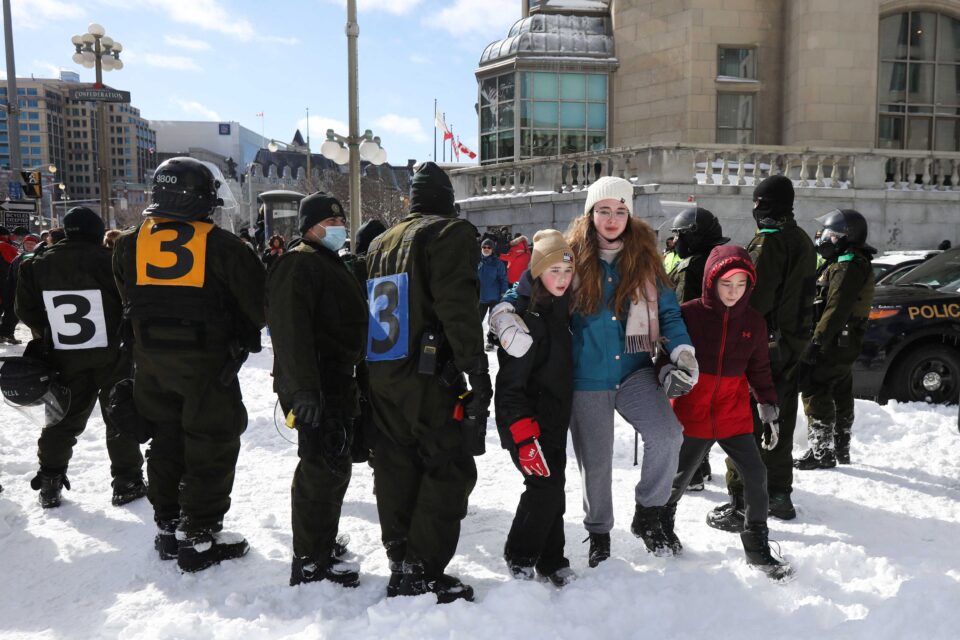 Kids walk to their hotel to get medicine for their father who is a trucker in a wheelchair, as truckers and supporters continue to protest coronavirus disease (COVID-19) vaccine mandates, in Ottawa, Ontario

Police began towing trucks from central Ottawa on Friday and stepped up arrests of protesters in a bid to end a trucker-led movement that has blockaded Canada’s capital for three weeks and embarrassed Prime Minister Justin Trudeau’s government.

The protesters have lined up heavy trucks outside parliament and Trudeau’s office, and Ottawa police, fearing escalation or violence, had sought to disperse them with fines and threats of possible arrest.

But with dozens of trucks still occupying the downtown, police on Thursday arrested two of the movement’s leaders and charged them with mischief. By Friday, after a night of heavy snow, officers had set up 100 road blocks near the protest site to deny people access and starve it of new supplies, like food and fuel.

Police said they had arrested 15 protesters and towed four vehicles, including what a Reuters photographer said was an 18-wheeler truck. Hundreds of police lined up in front of protesters near parliament, slowly advancing towards them and making arrests.

Some protesters kneeled in front of police with their arms linked. Others pushed back at police as they advanced, with the occasional scuffle breaking out. One man yelled “freedom” as police arrested him and led him away.

The protesters initially wanted an end to cross-border COVID-19 vaccine mandates for truck drivers but the blockade gradually turned into an anti-government and anti-Trudeau demonstration. They have vowed to remain peaceful but say they will stand their ground until police physically remove them.

“If they want to arrest me, I’ll put my hands out, and they can twist-tie me up like everybody else here. We’re going peaceful,” said Mark, a protester from Nova Scotia who would not give his last name. Nearby, protesters inside a tent were frying eggs on a portable stove, with no apparent plans to leave.

Police, who have deployed hundreds of officers to central Ottawa, say it will take days to clear the protests. At least one military-style armored vehicle was seen in downtown Ottawa. While most of the officers are not armed, some carried weapons including at least one equipped with a gun.

Police said protesters had “put children between police operations and the unlawful protest site,” adding: “The children will be brought to a place of safety.” Reuters did not witness any protesters putting children near police sites.

Trudeau on Monday invoked emergency powers to give his government wider authority to stop the protests. Legislators had been due to debate those temporary powers on Friday but the House of Commons suspended its session, citing police activity.

Trudeau sought the special powers after protesters shut down U.S. border crossings including Ontario’s Ambassador Bridge to Detroit, a choke point for the region’s automakers. The shutdown of the bridge, which was cleared on Sunday, had damaged both countries’ economies and posed a major crisis for Trudeau.

As police accelerated work to clear the protesters’ last stronghold, at least a dozen tow trucks were seen preparing to remove trucks and other protest vehicles still parked downtown.

Many of the tow trucks had all identification marks removed. Before Trudeau invoked the Emergencies Act, police had said some tow truck drivers were afraid to cooperate with authorities, fearing they might be the target of retaliation.

The Canadian Broadcasting Corp., citing security sources, said authorities had set up a number of temporary detention centers around the city, presumably to hold detained protesters.