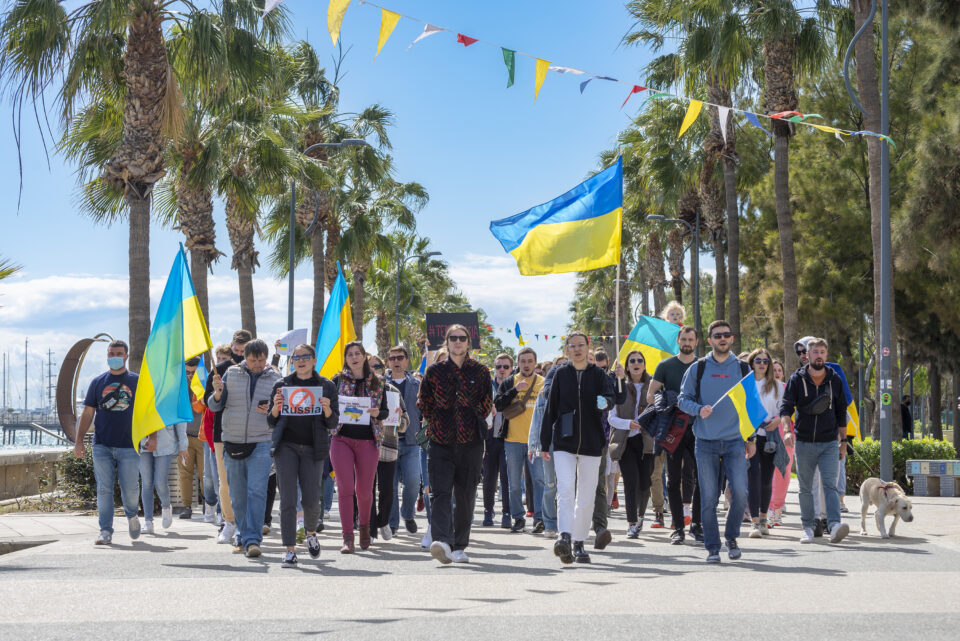 Russians and Ukrainians in Cyprus speak out

Ukrainian residents in Cyprus are now desperately worried about what the future holds for their family members and friends living back home, following Russia’s invasion this week.

But beyond the worry and anger over Russian President Vladimir Putin’s actions, Ukrainians also have to contend with how it will impact their relations with Russians also living in Cyprus.

The Cyprus Mail spoke to members of both communities who were mostly keen to stress the strong ties between the around 40,000 Russians living in Cyprus and several thousand Ukrainians.

“This is a war of the politicians and not the people. Putin uses propaganda and the press to try and turn Russians against Ukrainians. Perhaps it has worked for some, but here in Cyprus I believe we are all friends,” said Russian businessman Sergey who did not want his last name used.

“We are different people, culturally too that is true, but we have a lot in common and many families have members from both Russia and Ukraine. There are many love stories between us.”

Residents in Ukraine’s southeastern city and main port of Mariupol awoke to the sound of explosions on Thursday. Some started packing bags to leave. Others have stayed, uncertain what to do.

Irina Yakimovitch has relatives and friends in Mariupol, including a close cousin.

The Paphos-based Russian business woman grew up in Ukraine, attending school there. She feels deeply sorry for the people of Ukraine and ‘very ashamed’ of Russia’s actions in front of the world.

“Russia has let me down. Russia should not invade Ukraine,” she said. “This is old style government, harking back to the days of the Soviet Union and the Communist Party mentality. The world has moved forwards since then and Ukraine is an independent country and should be respected and treated as such,” she said, noticeably upset.

Irina’s cousin believes that the family will be evacuated as they have heard bombs. “They are all terrified. I am speaking to them every day. I am very worried,” she said

Mariupol is only around 10km from areas controlled by pro-Russian separatists.

Many civilians have already been injured or killed in the attacks by Russian forces, according to media reports.

“This is not a war to protect civilians as Putin claims, this is the killing of innocent people, an invasion, the world must step in and help,” a distraught Ukrainian resident in Paphos said.

‘My family are in Kyiv and I am so worried. They don’t know what to do.”

Ukrainian residents held protests outside the Russian Federation’s consulate in Limassol on Thursday and Friday and outside the presidential palace on Saturday.

Such protests have support from some Russian residents who are speaking out against Putin’s actions and say the world must show their solidarity.

“People in Russia believe the lies they are fed through the local TV channels, it’s all propaganda. Everyone must show him (Putin) that the world wants to live peacefully and get on with our lives. We don’t want to kill each other. This is insane,” said Nikolay, a Nicosia resident said.

He added that he often disagrees with the political views of some of his older family members, who support the narrative that Russia has no option but to fight back against Western powers that are determined to destroy it.

“I know that some people in Russia, even in my family, will understand Putin’s actions, but most of us do not support it,” he said.

Few, however, can be more conflicted than Paphos resident Olena who has a Russian father and Ukrainian mother and has lived in Cyprus for many years. She said the situation is causing her an immense amount of stress and she is understandably worried for her parents who live in the south of Ukraine.

“I have spoken to them, and they are as OK as they can be. I wish I could get them out to come here to Cyprus and safety but there is no chance of that at the moment.”

She stressed that the situation isn’t between the people of the two countries as they are ‘very friendly’ with each other.

“It’s down to the politicians,” she said. “War in general is wrong.”

Younger Russians in Cyprus are also concerned that a war and worsening relations with the West could have a devastating effect in Russia, with further freedoms being lost.

“The situation there now is bad anyway. The regular people are suffering. What is the point of this war?” said a Russian teenager who wished to remain anonymous.

“It is like turning the hands of time backwards. We want to develop and grow and for the youth to reach their potential and be doing amazing things in the world, making our mark. This is what makes Russia great, not dictatorship, conditioning and war.”

Our View: Spread of liberal democracy to Russia is what Putin is fighting against