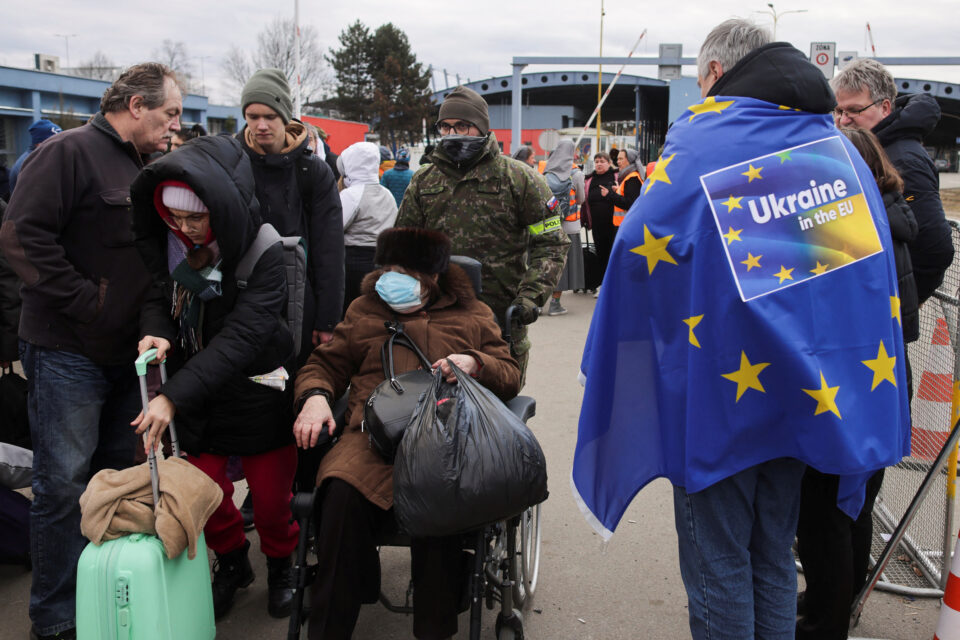 Russian President Vladimir Putin said Western sanctions were akin to war on Saturday as his forces pressed on with their assault on Ukraine, where planned civilian evacuations from two besieged cities were called off.

Russia and Ukraine traded blame over the failure to provide safe passage to civilians fleeing the two bombarded cities, on the 10th day of a war that has fuelled Europe’s biggest humanitarian disaster in decades.

The Russian defence ministry said its units had opened humanitarian corridors near the cities of Mariupol and Volnovakha, which have been encircled by its troops.

But in Mariupol, the city council said Russia was not observing the ceasefire and it asked residents to return to shelters and await further information on evacuation.

The International Committee of the Red Cross later said it understood that civilian evacuations from Mariupol and Volnovakha would not now start on Saturday.

The port of Mariupol has endured heavy bombardment, a sign of its strategic value to Moscow due to its position between Russian-backed separatist-held eastern Ukraine and the Black Sea Crimean peninsula, which Moscow seized from Kyiv in 2014.

“This night the shelling was harder and closer,” a staff member from Doctors without Borders/Medecins sans Frontieres (MSF) said, according to the aid agency. There was still no power, water, heating or mobile phone links and food was scarce.

The Russian defence ministry said a broad offensive would continue in Ukraine, where it denies attacking civilians or invading, calling its actions a “special military operation”.

Russian forces were carrying out strikes on military infrastructure and forces from separatist-held Donetsk were tightening the encirclement of Mariupol, Defence Ministry spokesman Igor Konashenkov said.

A United Nations monitoring mission said at least 351 civilians had been confirmed killed and 707 injured in Ukraine so far since the start of the invasion, adding that the real figures were likely to be “considerably higher”.

The number of refugees could rise to 1.5 million by Sunday night from 1.3 million now, the U.N. refugee agency chief said.

Women and children crossed at the Medyka checkpoint in southeastern Poland in freezing conditions.

One woman, struggling to carry half a dozen bags, wept when the snacks she had packed for her and her young son, who was clutching a green dinosaur toy, fell to the ground. She gave the boy a bag to carry as they trudged slowly on.

The situation was similarly desperate on the other side of the border, in the western Ukrainian city of Lviv, where thousands of women and children numb with exhaustion continued to flood in from war-ravaged eastern regions.

Putin said on Saturday he wanted a neutral Ukraine that had been “demilitarised” and “denazified”, adding: “These sanctions that are being imposed are akin to a declaration of war but thank God it has not come to that.”

Russia’s Foreign Ministry accused Britain of “sanctions hysteria” and vowed tough but proportionate measures against British interests in Russia. Britain plans to tighten its laws to facilitate a crackdown on Russian oligarchs in London.

Italian police have seized villas and yachts worth at least $153 million from four high-profile Russians put on an EU sanctions list, sources said on Saturday.

The conflict has shaken international diplomacy over Iran’s nuclear programme, one of the few areas where Russia and the United States had been working together to curb what the West suspects is an Iranian plan to develop nuclear arms.

Russian Foreign Minister Sergei Lavrov said on Saturday the new Western sanctions imposed on his country had become a stumbling block for clinching a nuclear deal with Iran.

In further diplomatic fallout from the war, the premiers of non-NATO countries Finland and Sweden said on Saturday they would step up their security cooperation due to Russia’s actions, though they were non-committal about joining the Atlantic alliance.

Ukraine says Russian forces have focused efforts on encircling Kyiv and Kharkiv, while aiming to establish a land bridge to Crimea.

Kyiv, in the path of a Russian armoured column that has been stalled outside the Ukrainian capital for days, was again under attack, with explosions audible from the city centre.

Ukrainian President Volodymyr Zelenskiy was expected to press Washington for more help in a video call with the U.S. Senate on Saturday.

At a meeting on Friday, NATO allies rejected Ukraine’s appeal for no-fly zones, saying they were increasing support but that stepping in directly could make the situation worse.

“Please close the sky … because people are dying,” said Solomiya Zdryko, 18, who fled from Lviv in western Ukraine.

U.S. Secretary of State Antony Blinken, on a visit to Poland, discussed security and humanitarian assistance with top officials there and also met refugees staying in a disused shopping mall near the border. Poland has taken in the vast majority of the Ukrainian refugees. L1N2V803R

It said at least 39 Russian planes and 40 helicopters had been destroyed, while Russia said it had destroyed 82 Ukrainian aircraft, 708 armoured vehicles, 74 multiple rocket launchers and 56 drones. Reuters has not been able to independently verify the accounts from either side.