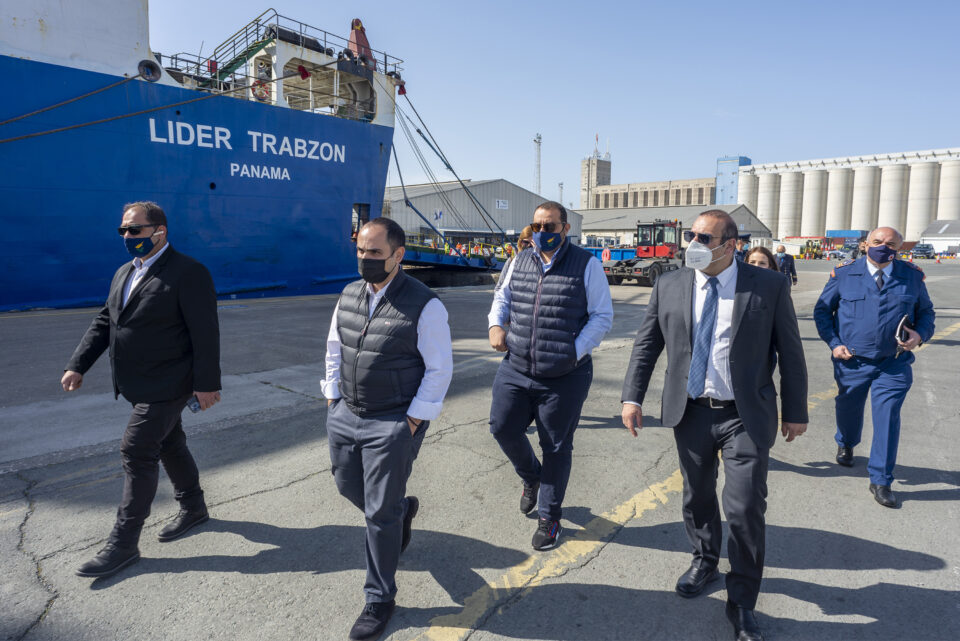 Transport Minister Yiannis Karousos and Commissioner for the Citizen, Panayiotis Sentonas visited Limassol port on Tuesday as 14 containers of aid were loaded on to the Lider Trabzon

A merchant ship carrying fourteen 40-foot containers of food and medical aid for Ukraine was leaving Cyprus on Tuesday after what was described as the biggest humanitarian drive ever on the island.

Officials visited Limassol port in the morning to oversee the final arrangements before the ship, the Panama-flagged Lider Trabzon, departs for Thessaloniki and from there, by road, to Ukraine in cooperation with EU Civil Protection Mechanism, according to CNA.

The entire effort was initiated by the government, aided by the Cyprus Ports Authority and assisted by the National Guard in arranging the transport of the aid from 40 collection points islandwide over the past ten days or so.

Transport Minister Yiannis Karousos and Commissioner for the Citizen, Panayiotis Sentonas, whose office coordinated the work, were among those at the port on Tuesday morning. Both thanked the Cypriot people, and those who were involved in organising the effort, for their generosity.

“This is an initiative which has been launched following the instructions of the president and whose organisation was undertaken by the commissioner for the citizen, along with other ministries,” he said.

“Today 14 containers are departing, containing medical equipment, food, essential items and civil protection material, which were transported by the National Guard to the port and received by the Cyprus ports authority, which took over the management of the effort.” The warehouse at the port was offered by Amathus-Aegeas.

Sentonas said Cypriots had shown their solidarity with the Ukrainian people. The collection points would remain open, he said “so those who wish to offer, can do so in the coming days.”

He also thanked the Cyprus Red Cross, which sent personal hygiene kits for children and adults, as well as the pharmaceutical company Medochemie, which has already handed over half a million euros worth of medical equipment to the Ukrainian authorities.

“So, we are continuing the whole effort,” he said.

The spokeswoman for Civil Defence, Olivia Michaelidou, said they were acting as liaison with the European Directorate that is responsible for the provision of humanitarian aid to Ukraine.

“We are informed about all the requests submitted by the Ukrainian side, through the European Civil Protection Mechanism, and in turn we inform all state services and bodies, in order to collect items that are absolutely necessary,” she said.

“This is the least we can do in the face of the magnitude of the disaster but also in the context of showing solidarity and support to the Ukrainian people. “We are ready to contribute in any way necessary.”