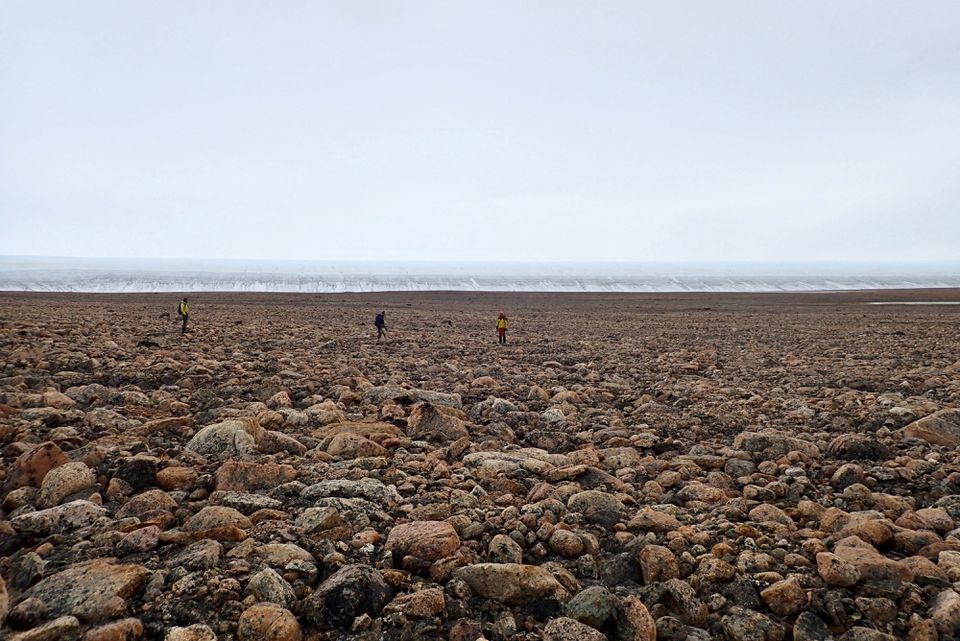 An immense crater in northwestern Greenland, buried under a thick sheet of ice and first spotted in 2015, is much older than previously suspected – formed by a meteorite impact 58 million years ago, rather than 13,000 years ago as had been proposed.

Scientists said on Wednesday they used two different dating methods on sand and rock left over from the impact to determine when the crater – about 19 miles (31 km) wide – was formed. They found that the meteorite – roughly one to 1.25 miles (1.5-2 km) in diameter – struck Greenland about 8 million years after a larger asteroid impact at Mexico’s Yucatan Peninsula wiped out the dinosaurs.

The crater lies beneath Greenland’s Hiawatha Glacier, covered by an ice sheet six tenths of a mile (1 km) deep. It had remained undetected until airborne ice-penetrating radar data tipped off scientists about its existence.

It is one of Earth’s 25 largest-known impact craters. Over the eons, Earth has been hit by space rocks innumerable times, though gradual changes in the planet’s surface have erased or obscured many of the craters.

Greenland at the time – during the Paleocene Epoch – was not the icy place it is today, and instead was covered with temperate rain forests populated by a variety of trees and inhabited by some of the mammals that became Earth’s dominant land animals after the dinosaurs – aside from their bird descendants – went extinct.

The meteorite released millions of times more energy than an atomic bomb, leaving a crater big enough to swallow the city of Washington.

“The impact would have devastated the local region,” said Swedish Museum of Natural History geologist Gavin Kenny, lead author of the research published in the journal Science Advances.

The impact also would have triggered regional seismic shaking while ash from the forest fires and dust and molten rock that had been violently ejected into the atmosphere would have rained down, yielding a thick blanket of debris, Kenny said.

As bad as it was, it did not approach the scale of calamity wrought by the asteroid – estimated at 7.5 miles (12 km) wide – that struck 66 million years ago, erasing three quarters of Earth’s species and initiating a global climate catastrophe.

“Whether the impact had a long-lasting effect on the global climate is currently unclear, but unlikely in my opinion,” said geology professor and study co-author Michael Storey of the Natural History Museum of Denmark.

Some scientists had hypothesized that the impact occurred after the Greenland Ice Sheet formed 2.6 million years ago and perhaps even as recently as about 13,000 years ago to initiate a documented cold period.

The researchers used two dating methods based on radioactive decay – the transformation of atoms of one element into atoms of another element. Because the ice-encased crater is inaccessible, they tested sand from rocks superheated by the impact and minerals called shocked zircons contained in pebbles – all scooped up from a river carrying material from the crater out of the glacier. Both methods yielded the same age results.

“Thus, the impact did not happen – or cause a climate-change event – in the time of humans as had been proposed and speculated previously,” Kenny said.

“Impacts of this size occur only every few million years so we don’t need to be very worried about such an impact happening anytime soon,” Kenny added.

Complying with an ECHR decision