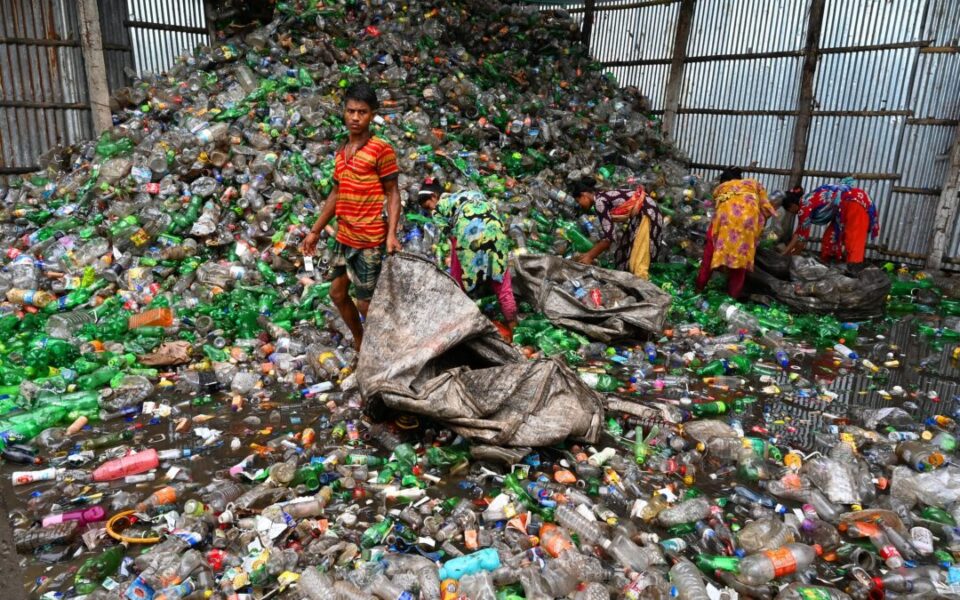 We are producing more plastics than ever

You pick up a piece of plastic litter from the beach, and get a small buzz. You’ve done something for the environment. But then you look around, and see plastic everywhere. It’s much more than you could pick up.

While that sounds positive, focusing on pollution is missing the elephant in the room: production. Why is more and more plastic being produced, with some ending up in forests, rivers and oceans near you?

Our research has shown that to actually make a difference to the ever-growing amount of plastics in our oceans, our soils and our bodies, we must focus on why our societies use and throw away ever more single use plastics.

The answer lies in our systems. If you’re a time-poor parent, stressed by juggling kids, work and the mortgage, it can be much easier and faster to reach for heavily packaged ready-made meals, or get dinner delivered in many layers of plastic.

Plastic pollution is out of control, with almost 80 per cent of the 8.3 billion tonnes we have produced thrown away into landfill or the environment.

Why, then, is the UN focused only on the problem of waste, rather than production? We are producing more plastics than ever. Plastics are created from oil, and will account for one-fifth of all oil consumption by 2050. Not only this, but 40 per cent of all the plastics we produce is used for packaging. Just over a third of these plastics are for food packaging.

Our research has shown mainstream approaches such as the UN resolution are ineffective and even counterproductive.

If we want to make a dent in the major problem of plastic pollution, we have to make systemic changes.

Why? Consider recycling and the notion of the circular economy, often held up as an answer to plastic waste. The issue here is that plastic degrades every time it is cycled through. Not only that, but recycling itself is often highly energy-intensive with its own set of environmental impacts.

Recycling only delays the final disposal of plastics. Similarly, the concept of a circular economy is only put into practice when profitable.

Could we switch en masse to alternative disposable materials, like bio-based packaging?

Alas not. This isn’t the solution either, as these products still have significant social and environmental impacts.

Both recycling and switching to bio-based packaging are drawn from the technocratic greenwashing playbook, in which we look to technology to let us keep living in an unsustainable way.

Why do we use and throw away so much plastic?

What we actually need is to consider how we can reduce how much plastic we make and consume, so we have a better chance of living within the planet’s ecological boundaries.

Our current capitalist system gives producers the incentive to make as much plastic as they can sell, and to create new market niches for their products. It’s no surprise the result is an avalanche of plastic.

Take food packaging. The use of plastics to cover food has increased dramatically since the 1960s, alongside the expansion of the globalised food market.

There is a link. As food production has gone global, it has displaced some local food production, manufacturing and consumption. Major corporations have profited from this shift, which requires longer and more complex supply chains. And longer supply chains means more packaging to keep food saleable.

To us, this suggests that the problem of plastic runs much deeper than how we prevent the waste entering our rivers and oceans. We believe the central issue stems from the growth-at-all-costs capitalist system.

Consider: packaged food is sold as “convenient”. Why do we need convenient ready-to-eat meals or those with minimal preparation, like frozen dinners, instant noodles and fast food? Because we are time-poor.

Why are we time-poor? Because in our fast-paced capitalist economies, people need to fit food preparation around their inflexible paid labour, which may often require long hours or fitting into a casualised system.

As a result, many of us get to the end of the day with little time and energy to shop in local stores, cook our meals from scratch using fresh ingredients, or grow our food.

It’s well established that time deprivation has increased how much processed packaged food we eat.

Waste is just a symptom

We do not hold out great hopes for the new UN agreement on plastics, based not only on the failure to address the root causes but also the poor implementation of previous climate commitments and other international environmental agreements such as e-waste management.

Proposals to reduce plastic pollution which skim over the root causes will do very little to reduce our overall use of plastics and alleviate the significant damage they do to our societies and the environment.

If we are serious about reducing the damage, we must look at deeper solutions, One might be transitioning towards a degrowth society, which would help us re-localise food systems.

In a degrowth society, we would gradually shift back to local food production, which would reduce the globalisation of food and shorten supply chains. That, in turn, would slash the need for packaging.

Degrowth would also help us address time poverty by, for example, reducing working hours or introducing a work-sharing mechanism.

There would be more free time in a degrowth society, and local food systems would provide healthy, fresh, seasonal produce requiring minimum packaging.

Supporting local farmers or pursuing more free time for all might well be a more effective solution to the issue of plastic pollution rather than simply pushing for improved recycling schemes.

Is this just blue sky thinking? No. Consider how our society was able to react to the COVID pandemic and get organised differently.

The pandemic showed us we are capable of large-scale change if a problem is taken seriously. If we begin to prioritise our social and ecological well-being over company profits, we will see change.