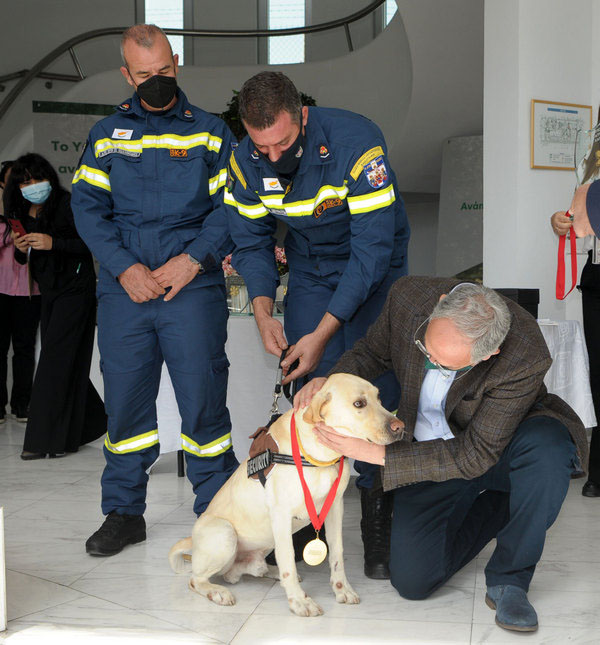 Carlos, a member of emergency response unit Emak’s K-9 unit, stole the show at Thursday’s award ceremony of the newly launched animal welfare awards aiming honour the work carried out by individuals and organisations to promote animal protection and welfare in Cyprus.

Other winners were a woman whose rescue of two dogs from a cage led to their owner being convicted of animal abuse, four volunteers who saved a dog and her six puppies from a drainage pipe, two dog shelters, a cat sanctuary, a TV info campaign, and a free-range egg farm.

Addressing the ceremony, Agriculture Minister Costas Kadis said the awards sought to bring to light the challenges and difficulties animal rescues and animal welfare volunteers face in their daily struggles at the frontlines of animal protection.

He said authorities respected and supported volunteers as he extended a “thank you and a promise” that the ministry will continue to work for the welfare and protection of animals.

Cyprus faces an acute problem with abandoned animals, including a large number of hunting dogs, and overwhelmed animal welfare organisations have long been calling for more help, and tougher penalties for animal abuse and neglect.

Authorities have pointed to the recent establishment of an animal police unit and new legislation as progress, though the general consensus is that a lot more needs to be done.

For the exceptional rescue of an animal, one award went to Michel Metziti who rescued dogs Chance and Miracle from atrocious conditions in a cage, took them to a vet and covered most of their costs. Both dogs suffered from leishmaniasis, and one was also diagnosed with kidney failure. The case went to court and a two-month suspended jail sentenced was handed down to the owner.

In the second instance Nieske De Jong, Paula Fletcher, Mark John Phillips and Sam Taylor – all volunteers at Stray Haven in Paphos — found a dog with six puppies in a drainage pipe, close to a busy road. They managed to rescue all seven – only managing to get the two last pups out by crawling into the pipe. The puppies were all sent to the UK for adoption after treatment.

The prize for exceptional service by an animal in rescuing or helping a person was awarded to Emak’s K-9 unit for its participation in August 2020 in the search and rescue team sent to Beirut after the huge explosion at the port.

Two awards were given to animal shelters – one private and one community. The winners are the Malcolm Cat Protection Society set up in 1980 by Malcolm Stevenson which cares for 200 cats at its current location in Akrotiri, and Unified, a dog shelter set up by the municipalities of Nicosia, Strovolos, Aglandjia, Engomi, Ayios Dhometios and Lakatamia in 2009. Renovated in 2015, it has to date cared for 2,566 dogs and helped find new homes for most of them.

The award for the most animal-friendly farm went to Glafcos Schizas’ free range egg farm in Evrychou. The farm has been planted with olive and pine trees, vines and seasonal vegetables and poultry roam freely over the 25 decares.

The fifth category, for information campaigns for animals, was given to the people behind CyBC’s Kita me sta matia (look me in the eyes) TV spots. The producers are MediaboxLtd. Producer Elmos Neocleous, text-narration Yiorgos Pittas, cinematography Tasos Archontides, and music Jean-Paul Sacy. The TV spots feature stories about people and animals, giving emphasis to animal shelters and drawing attention to weakness in animal protection.

Kremlin ‘concerned’ about US ‘complete misunderstanding’ of Putin