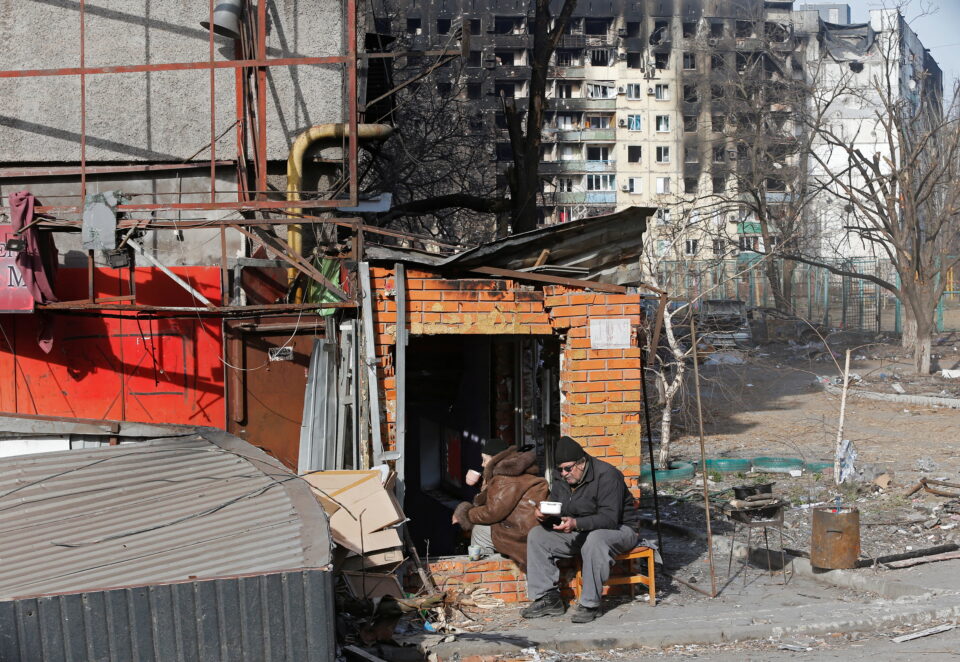 Residents eat outside a damaged building in the besieged city of Mariupol, Ukraine

Russian propaganda has now reached its apogee with Ukrainian war

There is no doubt that Russia, in pursuing its domestic and foreign policies, has been constantly and brazenly lying not only to its own society but also to the international community, purposely spreading false information.

The whole civilised world fully understands that there is no evidence of even a tiny sign of democracy in Russia. It is fear that drives many in Russia: fear of freely expressing views, fear of protesting against tyranny and fear for personal security.

Russia has cracked down on free speech and introduced strict propaganda controls on what its citizens can see and hear about the brutal war in Ukraine. They even passed the law that has criminalised any use of information that contradicts the government’s version of events. The law has forced many independent media to leave the country under fear of lengthy prison terms.

Russian media report that Russian soldiers are extremely careful about preserving Ukrainian civilians, that they’re being greeted as liberators, that everybody wants to live under Russian rule, and that there are no civilian casualties on the Ukrainian side. No words can express what we feel hearing of this hoax, but the scale of lies is enormous and frightening.

All these narratives about “neo-Nazism or fascism in Ukraine”, “biolaboratories and chemical weapons in Ukraine” or “we defend the Russian speaking citizens” and so on have nothing to do with the truth but serve as another attempt to mislead Russian society and distract it from the country’s own internal problems.

The spread of disinformation across the globe has become a daily routine of all Russian diplomatic missions abroad. Russia continues its use of internet trolls to advance its goals. Just some days after Russia invaded Ukraine, multiple social media platforms, including Meta, YouTube and Twitter, reported the dismantling of coordinated networks of accounts propagating disinformation. These networks, which were made up of stolen accounts or invented profiles with fake names and AI-generated profile photographs, shared strikingly identical anti-Ukraine talking points, implying that they were directed by centralised sources linked to Russia.

Russian intelligence pushes news and analysis websites around the world that support Vladimir Putin’s view of the Ukraine invasion, which he described as a “special military operation”. They continue to instigate gatherings of people in all European countries to demonstrate in support of their so-called “special operation” but in fact they simply support Russia’s war against Ukraine.

When some Russian officials say that “in Ukraine we are not at war with the Ukrainian people, whom we still treat as our own” I would like to remind them of the following:

First of all, Ukraine is an independent democratic state. The territory of Ukraine is indivisible and inviolable.

A full-scale war launched by the Russian Federation against Ukraine on February 24 continues at the very heart of Europe. Shelling and bombing by the Russian forces continue to destroy Ukrainian towns and cities causing suffering and the deaths of thousands of innocent people, including women and children.

The inhabitants of Mariupol have been under siege for more than a month. They are shelled and bombed every day and every night. Most of the city’s residential areas have been destroyed. Russian armed forces are blocking the delivery of humanitarian assistance and evacuation of the civilian population to other parts of Ukraine.

Every day of the Russian war against Ukraine aggravates the humanitarian situation further and further. In fact, it has already reached the level of humanitarian disaster.

People are starving to death in the occupied or besieged areas. People are being killed as they attempt to flee from battle-affected areas. Cities are razed to the ground by shelling and airstrikes.

Today, by spreading totally false narratives and ideology against Ukraine and Ukrainians as a hostile nation, as “Nazis” and “fascists”, Russia continues to justify its terror against its neighbouring country. It is deeply unfortunate that the so-called “denazification” as the pretext of the so-called “special military operation” of Russia is largely supported by Russians. Despite the fact, that the Russian military have been killing civilians in Ukrainian cities with a predominantly Russian-speaking population, I just want to ask one question. What kind of “nazism” or “fascism” have Russians found there and whom have they come to defend?

We must stop this war. Russia has to cease its military actions and withdraw all forces from the entire territory of Ukraine immediately and unconditionally, in line with the respective UN General Assembly resolutions and in line with the order of the International Court of Justice of March 16.

Justice will come soon enough. The beautiful city of Mariupol will rise from the ashes. Peace and prosperity will return to Ukraine.

Ruslan Nimchynskyi is the Ukrainian ambassador to Cyprus

What to think about when shopping for plants