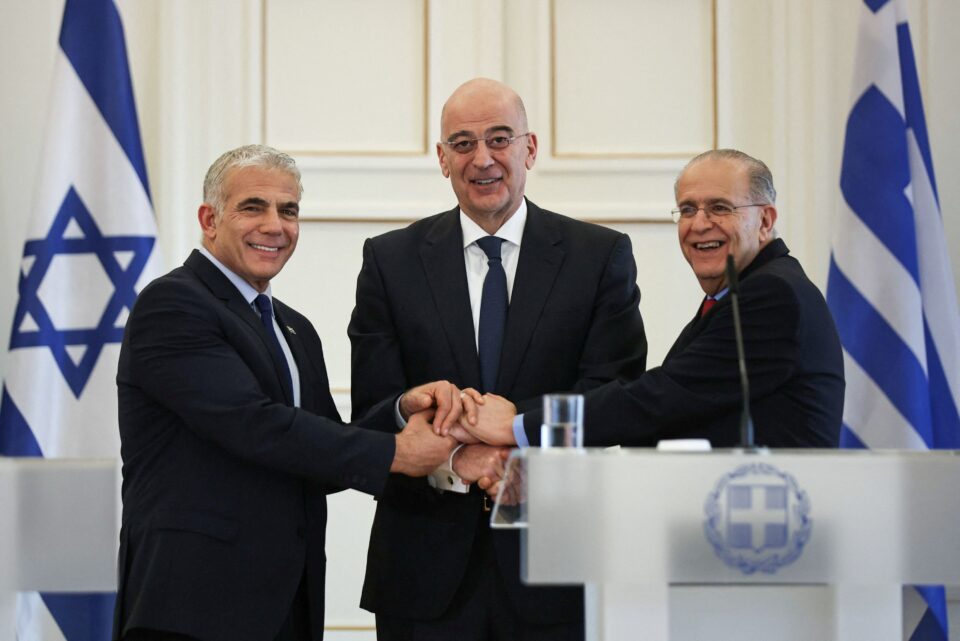 The foreign ministers of Cyprus, Greece and Israel on Tuesday reiterated their commitment to a ‘strategic alliance’ of the three nations, pledging to expand cooperation in an otherwise turbulent region.

The trilateral summit in Athens was hosted by Greece’s chief diplomat Nikos Dendias, and attended by his Cypriot and Israeli counterparts Ioannis Kasoulides and Yair Lapid.

Dendias held separate talks with Kasoulides and Lapid, after which the three had a joint meeting.

The summit took on special significance, taking place amid the backdrop of the Ukraine situation.

At a joint news conference following the talks, the Greek foreign minister spoke of the “unbreakable nature” of the trilateral cooperation, and stressed the three nation’s desire to enhance cooperation in a wide range of fields, including energy and the economy.

“This partnership has an important dynamic,” Dendias said, calling it “a relationship not affected by other regional developments or relations with other countries.”

All three foreign ministers condemned Russia’s invasion of Ukraine. Dendias in particular said war crimes were being perpetrated in the city of Mariupol, where a large number of Greek-heritage Ukrainians reside.

For his part, Lapid said Israel’s relations with Turkey are a “parallel, welcome and contemporary process, an additional opportunity to enhance regional stability.”

Turning to face his counterparts, he added: “As always, we will do this in full coordination with you.”

In his remarks, Kasoulides referred to the recent flurry of activity in the Middle East and the Gulf – the Negev Summit, the Sharm el Sheikh summit and the Aqaba meeting.

“I have always believed in the untapped potential of dialogue and integration of the region, but I could have never predicted this fast pace with which regional alliances would develop, becoming the new normal.

“Undoubtedly, our own trilateral cooperation mechanism and the extended format with the participation of the United States, fit very well into this narrative and are a proof of the geostrategic importance and the inherent value of our partnership.”

Kasoulides said Cyprus stands ready to engage in any initiative aiming to restore good neighbourly relations between the states of the region, based on mutual adherence to the principles of international law.

“During our discussion, we have had the chance to review the latest developments as regards our energy cooperation which is seen under a new light in the midst of the war in Ukraine. Our three countries can and should be part of the solution of Europe’s quest for diversified, secure and cleaner energy supply from the Levantine corridor,” he said.

“We are proceeding with projects such as the EuroAsia Interconnector and the EastMed Pipeline, both of which have attracted significant support from the EU and the US, and we are confident that when materialised they will have an added practical and geostrategic value for the Eastern Mediterranean and the European Union.”

Also on Tuesday, prior to the trilateral, the three foreign ministers met briefly with Victoria Nuland, the US Under Secretary of State for Political Affairs.

Nuland, currently on a tour of the region, is due in Cyprus on Wednesday. In the afternoon she will meet with Kasoulides and the Ukrainian ambassador in Nicosia. In the evening she will be hosted by President Nicos Anastasiades at the presidential palace.