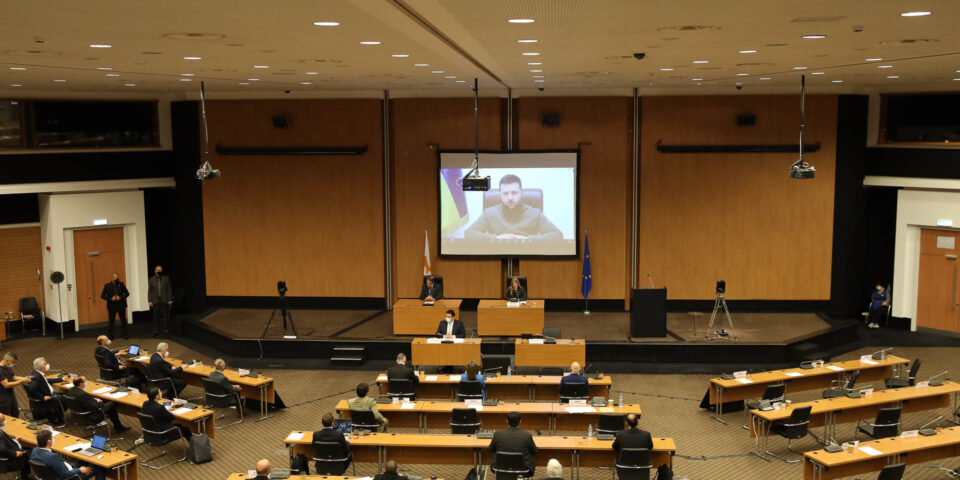 The Ukrainian president’s failure to mention Turkey’s invasion of 1974 has cast a long shadow over his historic address to parliament on Thursday, the bitter taste exacerbated by the sense he was reprimanding Nicosia and the fact the live connection was lost midway through the House president’s response.

Volodymyr Zelenskiy’s address took place on shaky ground as main opposition Akel opted last minute not to attend the special House session, as what was expected to be a moment of solidarity appears to have instead soured for many on the island.

Chief among them is the surprise expressed by many that Zelenskiy’s address made no reference to Turkey’s invasion in 1974.

“I had expected a diplomatic, considered reference because as you are aware our country faced the same situation 47 years ago, with different actors, and the Ukrainian president was addressing a nation from which he is seeking support at the EU level,” House President Annita Demetriou told Alpha on Friday morning.

President Nicos Anastasiades told reporters on Thursday, after the address, that: “It bothers us that there was no mention [of the Turkish invasion]. The principles of law do not distinguish between states.”

Eyebrows were raised when the live feed was interrupted as Demetriou responded to Zelenskiy’s address, referring especially to the Turkish invasion.

The House president said that she had contacted the Ukrainian ambassador Ruslan Nimchynskyi about this, who cited technical issues were at fault.

In the Republic, there is a sense of solidarity with the Ukrainian people, who they see as victims of a fate similar to that of 1974 – invasion, occupation, and displacement by a bigger power.

It was in that context that many had hoped Zelenskiy would use his platform granted by parliament to shine a light on those events, particularly as Cyprus has made significant sacrifices by signing up to the severe sanctions against Moscow, with which it had historically warm ties.

Russia has since placed Cyprus on a list of “unfriendly” countries, with many fearing the economic repercussions such as the loss of Russian companies and no tourists from what has become a significant market.

Demetriou told state radio that the party leaders had previously been contacted over Zelenskiy’s address to parliament where all the parties, apart from socialists Edek, agreed – including Akel.

On Friday, Edek emphasised that it was the only party to not approve the move, as it said that Zelenskiy has failed to condemn Turkey’s invasion while instead continuously praising Turkish President Tayyip Erdogan.

Akel pulled out of the session last minute, following the appearance of an Azov Battalion “fighter” during Zelenskiy’s address to the Greek parliament earlier in the day.

“Today’s development is a provocation to any democratic person,” the party said at the time.

Demetriou on Friday said that measures were immediately taken so that there was no repeat of the incident during Zelenskiy’s address to the Cypriot parliament, referring to the video featuring the Azov “fighter”.

Diko on Friday also expressed its disappointment at Zelenskiy’s omission, saying that Cyprus is perhaps the only European nation which can truly understand the consequences of this war.

Many have bristled at what they view as Zelenskiy not being appreciative of what Cyprus has already done as he also called for an end to “privileges” afforded to Russian nationals – such as dual nationality through the granting of Cypriot passports.

“A call for alliance with a sovereign state cannot be made with a view to manage its internal affairs,” former justice minister Emily Yiolitis wrote on Twitter, adding that: “Whom Cyprus naturalises, under what criteria and which passports it rescinds is its own [internal] matter.”

Elsewhere, Turkey has hosted negotiation talks between Ukraine and Russia, with many in Cyprus exasperated as to what they view as double standards.

There is frustration that while Turkey has not signed up to the sanctions on Moscow it is still being treated as a “positive force” in the region despite what many view as Ankara having carried out a similar invasion in 1974.

Ukraine has received Turkish-made Bayraktar TB2 drones, with even songs having been made praising their role in striking advancing Russian forces.