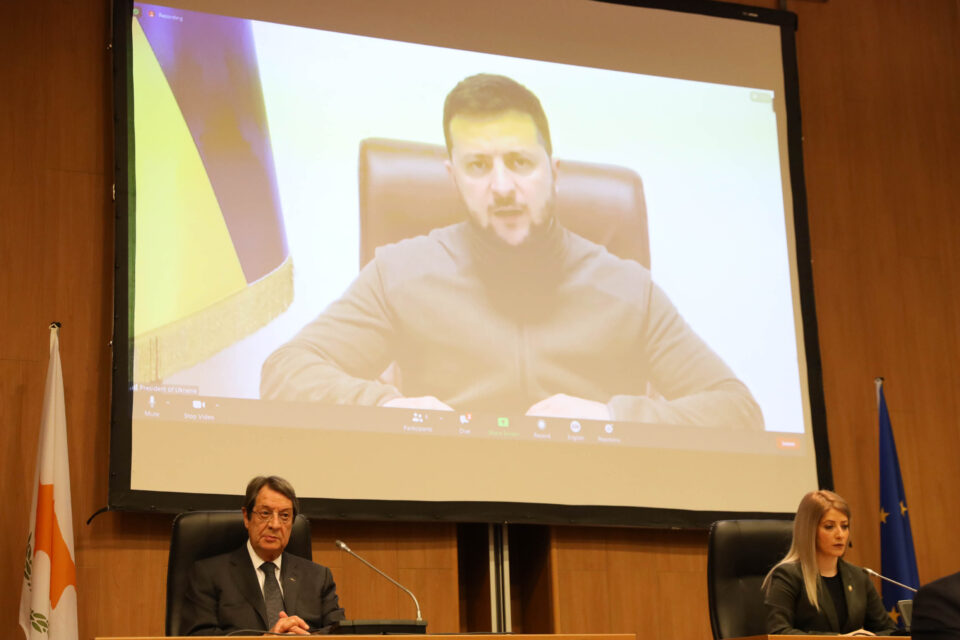 Ukrainian President Volodymyr Zelenskiy on Thursday called on Cyprus to close its ports to all Russian ships and to deny “privileges” to Russian nationals, as part of an effort to turn the squeeze on Moscow over its invasion of his country.

He was speaking to the Cypriot legislature via video link – part of his virtual tour of addressing national parliaments across the globe.

“Ladies and gentlemen, people of Cyprus – we are grateful for your principled stance,” Zelenskiy said, thanking Cyprus for the humanitarian assistance it has sent to Ukraine.

The special session of the House plenum was packed, with President Nicos Anastasiades and Foreign Minister Ioannis Kasoulides in attendance. The event, broadcast live on television, began at 6pm sharp as scheduled.

“The fate of Europe is at stake. Day and night we think of one thing alone: how to save human lives,” Zelenskiy said.

Coming back on screen, Zelensky said of Russia: “They want to exterminate our territory.”

He went on accuse Moscow of deliberately killing civilians – an apparent allusion to the allegations concerning recent events in Bucha, a town north of Kiev.

Donning a khaki-coloured zip-up top, and in the familiar setup seated next to his country’s flag, the Ukrainian leader went on to ask the Cyprus government to deny access to Russian shipping.

“Please close Cypriot ports to all Russian ships…obviously this would be done in coordination with the European Union.”

He also called for an end to “privileges” afforded to Russian nationals – such as dual nationality through the granting of Cypriot passports.

Europe should also act in concert to boycott Russian oil.

Closing it out, Zelensky said:

“I am certain you feel our pain, and I am certain that you will assist us in our quest to join the European Union.”

He signed off with the signature phrase “Slava Ukraini!” (Glory to Ukraine!)

Prior to Zelenskiy’s appearance, House President Annita Demetriou made a brief statement, where she stressed the Republic stands behind Ukraine in its hour of need.

“We assure you,” she told Zelenskiy who was already online, “that we shall unwaveringly defend international law. We also express our horror at the killing of civilians which we have witnessed in the past few days.”

Answering reporters’ questions later, Anastasiades was asked about the fact Zelenskiy did not condemn the 1974 Turkish invasion of Cyprus.

“Of course this should have been done, and I want to be straightforward about it…but what we expected today is to hear about the suffering of the Ukrainian people, the same as we suffered in 1974.

“It bothers us that there was no mention [of the Turkish invasion]. The principles of law do not distinguish between states,” he noted.

On whether Nicosia plans to revoke passports issued to Russian ‘oligarchs’, Anastasiades merely recalled that the cabinet cancelled four Cyprus passports of Russian nationals, of the 850 Russians who are on the EU sanctions list.

“The rest [on the list] who have passports did not receive a passport from the Republic of Cyprus.”

Main opposition Akel refused to attend the special House session while anti-Russia protests were also being held outside parliament while Zelenskiy spoke.

In a press release, the party explained their snub was due to the appearance of an Azov Battalion “fighter” during Zelenskiy’s address to the Greek parliament earlier in the day.

“Today’s development is a provocation to any democratic person,” the party said.

Akel said that, despite its initial reservations over Zelenskiy’s address, it had eventually decided to attend “as a show of solidarity to the people of Ukraine suffering the consequences of the Russian invasion and the geopolitical tug-of-war between the West and Russia.

“But today’s development, with the decision to display neo-fascists in Zelenskiy’s address, prevents us from attending. We wholly support the Ukrainian people, but not the neo-fascist groups who hold a large share of the responsibility for Ukraine’s tragedy.”

Zelenskiy’s virtual speech to the Greek parliament had cut to a live feed with a Greek-Ukrainian, called Michael, who at one point told MPs: “My grandfather was wounded three times by the Nazis, I am fighting with the Azov Battalion.”

The appearance of the man caused a political stir in Greece, with some there calling it a stunt.

The Ukrainian leader has been addressing national parliaments to gain support for his country that was invaded by Russian troops on February 24. In his previous addresses, which included the US congress, the British House of Commons and the Israeli parliament among others, Zelenskiy used examples familiar to the people of each country to highlight Ukraine’s fight for independence and sovereignty.

Cyprus’ parliament had condemned Russia’s invasion of Ukraine back in February and had called for an immediate ceasefire, saying it supports the sovereignty, independence and territorial integrity of the country.