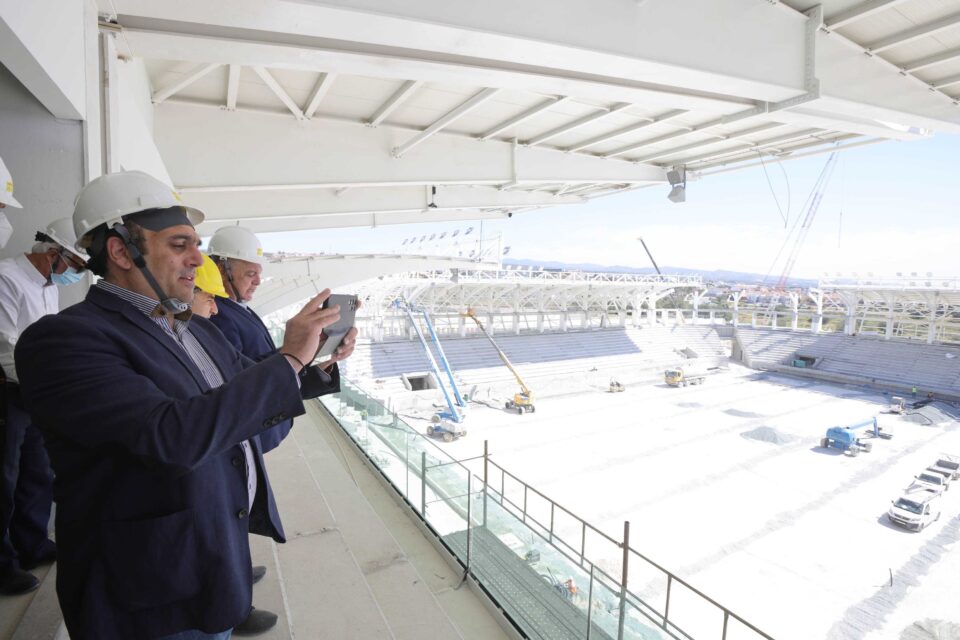 Work on a new Limassol-Saittas highway and the construction of a new Limassol football stadium are proceeding on schedule, Transport Minister Yiannos Karousos said on Friday after a visit to the district to review progress in major projects there.

Karousos, who was accompanied by MPs members of the House Transport Committee, told reporters that the department of public works was managing 64 projects in the Limassol district, some at their initial planning stage, others close to completion.

The 22.5 km Limassol-Saittas highway will built in three phases at a total cost of €198m. Work on phase one — the 3.7 km section from Polemidia to Palodia, a 5km secondary road network, a flyover, an overpass, and four roundabouts – started in September 2020 and is expected to be completed towards the end of 2023 at a cost of €31.09m.

Karousos said studies are continuing on phase two, the 8km stretch from Palodia to Alassa that will feature flyovers, bridges, an overpass and underpass as well as a secondary road network. Construction is expected to start in 2024, take four years and cost €77.35m.

Initial technical studies have been carried out for phase three, the 10.8km Alassa to Saittas stretch with the final study due towards the end of the year. It includes four flyovers, a 310 -metre tunnel, two bridges, over and under passes and a secondary road network. Phase three will cost €89.2m and the time plan for the construction will be finalised once phase two gets underway.

Karousos said he was satisfied with progress on phase one, noting that the project will bring significant benefits and bolster government efforts to combat rural depopulation and improve the quality of life in the mountain communities of Limassol.

The new €45.22m Limassol stadium at Kolossi got underway in February and will completed this August, although road works in the area will only be completed at a later stage.

Part of the project is improvements on the Spyros Kyprianou avenue and Tasos Isaac road, three new roundabouts and the construction of four links to the Limassol-Paphos highway. Work started in March and should be ready in October 2023 in three phases at a total cost of €9.09m.

Part of phase one will be handed over with the operation of the stadium in September and the remainder in December this year.

Asked to comment on the fact that the road network will not be ready with the operation of the new stadium, Karousos said that facilities will be in place for fans.  “Everyone should know that the required road network will be there to serve the fans for the first game,” he said.

The entire project – to be ready in October 2023 – was intended not just for the stadium but the municipalities and communities in the area, he added.

But House transport committee president Marinos Moushiouttas questioned whether fans would be catered for, given that the stadium will operate in September and phase one of the roadworks will be ready on December 7.

Karousos and MPs were also briefed about other projects in the Limassol district at a special meeting with the public works department. These he said would significantly improve the everyday lives of residents.

Examples include the Limassol-Agros road, upgrade of the road from the exit of the Limassol-Nicosia highway to Pareklisia community, phase one of the Yermasoyia-Akrounta-Dieronas-Arakapas road and a roundabout to link Christakis Kranou and Daidalidon road in Yermasoyia.