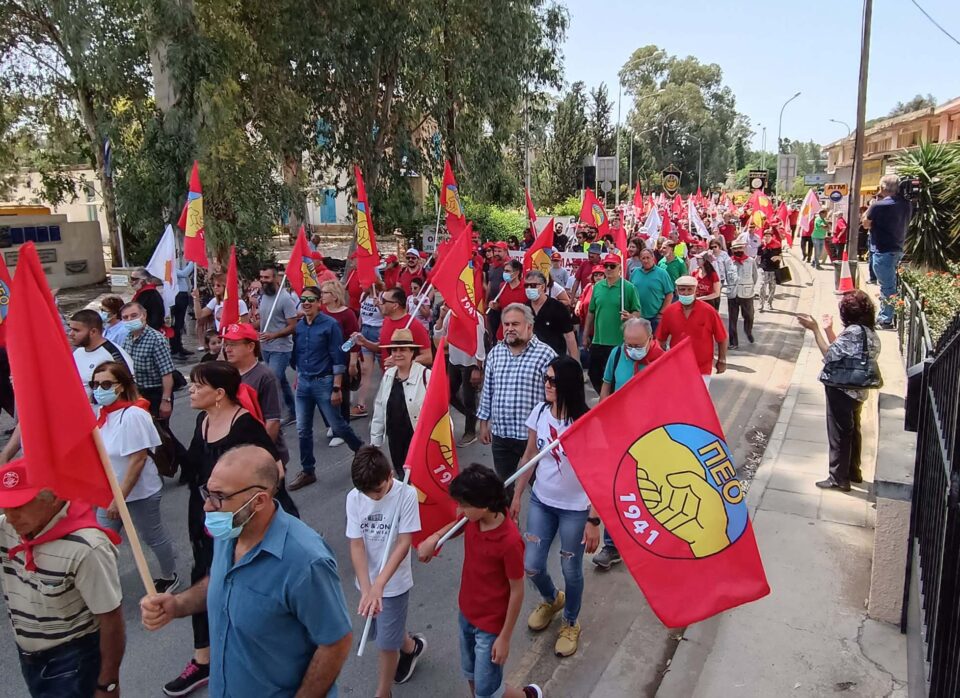 “Labour Day is a chance to remind ourselves why we have chosen the path of defending the world of work and protecting the economically weaker,” he said.

The Disy government, he said, is widening inequalities and the future for workers is constantly becoming more bleak. “The Disy government promotes the deregulation of labour relations and work without rights,” he added.

“Those in power live in another, parallel reality that has nothing to do with the difficulties experienced by tens of thousands of our distressed fellow citizens”.

And he said thanks to the policies of the current government thousands of households and small to medium-sized enterprises are not making ends meet, with one in ten workers at risk of poverty.

Akel, he said, calls for the adjustment of social benefits and support for low-income pensioners. “It promotes the demand for a decent minimum wage without eroding collective agreements and workers’ rights,” he said.

Stefanou said that Akel also sends a message of solidarity to Turkish Cypriot who have flooded the streets in the north in recent weeks with mass demonstrations against social and economic poverty.

“Their struggles are an extension of the struggle of the entire Cypriot people for reunification. The only way to end this struggle is a bizonal, bicommunal federation with political equality,” Stefanou said.

At the same event Peo Secretary General Sotiroula Charalambous said “we are here to honour the pioneers, the Greek Cypriot and Turkish Cypriot workers who, through the hard class struggles of the 40s, won the right of every worker to unionise, to have regulated working conditions, to have social security”.

Today, she said, the effects of the war in Ukraine and the sanctions against Russia are already visible in the global economy, while the spening power of wages has fallen seven per cent below where it was in 2016.

This caused a real problem of survival for thousands of low-paid workers, low-income pensioners, families living on social benefits, and vulnerable groups of the population, she said.

But she said the current government is “living in a world of its own” relying on the divine hand of the market to regulate the problem.

She said Peo has fought battles in recent years to stop to the deregulation of labour, to protect collective agreements and demand the guarantee of basic rights for every worker, “the introduction of measures to put the brakes on the expansion of cheap labour”.

Despite the difficulties, she said, the union has managed to keep collective agreements in organised sectors and businesses. In contracts for employees, in construction and in hotels, it has succeeded in introducing legislation that makes basic terms of contracts compulsory for all employers.

And right now after a great deal of effort discussions over a minimum wage are at a final point. “The minimum wage must put a stop to cheap, royalty-free work,” Charalambous said.

In a joint declaration issued with Turkish Cypriot trade unions, Peo called for the reunification of our country, so Greek Cypriot and Turkish Cypriot workers can continue their struggles in conditions of peace and security within the framework of a united economy, with a single system of labour relations and uniform working conditions for all.

Tales from the Coffeeshop: ‘Russia is just a victim of Western conspiracies’