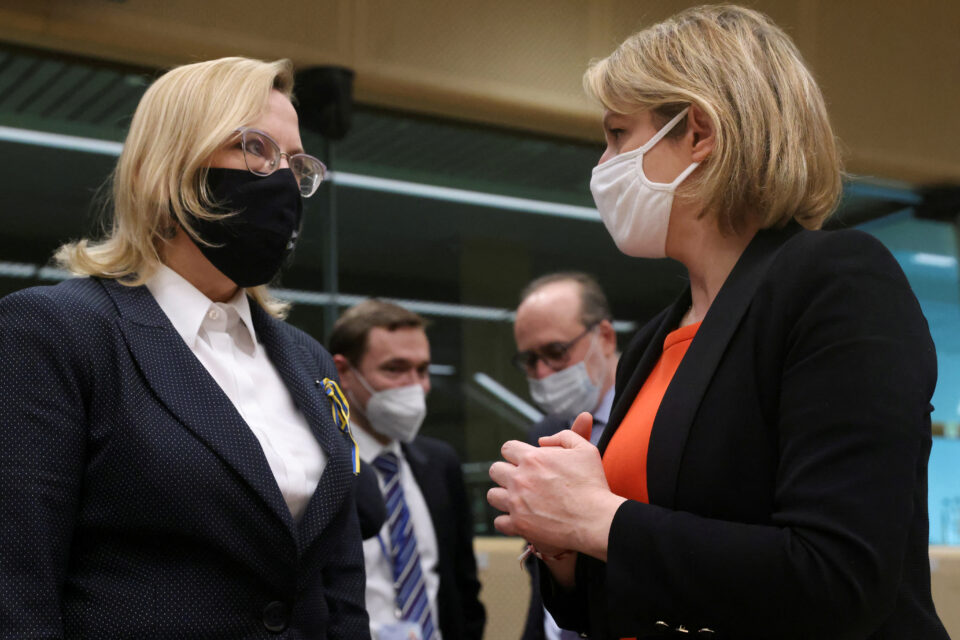 The European Union was preparing sanctions on Russian oil sales over its invasion of Ukraine after a major shift on Monday by Germany, Russia’s biggest energy customer, that could deprive Moscow of a large revenue stream within days.

The European Commission is expected to propose a sixth package of EU sanctions this week against Russia over its Feb. 24 invasion of Ukraine, including a possible embargo on buying Russian oil.

Kyiv says Russia’s energy exports to Europe, so far largely exempt from international sanctions, are funding the Kremlin war effort with millions of euros every day.

“This package should include clear steps to block Russia’s revenues from energy resources,” Ukrainian President Volodymyr Zelenskiy said in his nightly video address.

Germany said on Monday it was prepared to back an immediate EU embargo on Russian oil.

“We have managed to reach a situation where Germany is able to bear an oil embargo,” German Economy Minister Robert Habeck said.

Chancellor Olaf Scholz, who has been more cautious than other Western leaders in backing Ukraine, has been under growing pressure to take a firmer line.

Scholz vowed sanctions will not be lifted until Russian President Vladimir Putin signs a peace deal with Ukraine that Kyiv can support, he said in an interview with ZDF public television. Read full story

Weaning Europe off Russian oil is likely to be easier than reducing dependence on Russian natural gas. Moscow has demanded European customers pay for gas in roubles, which the EU rejects. Last week, Moscow cut off supplies to Poland and Bulgaria.

EU ministers meeting on Monday warned that complying in full with Moscow’s demand for gas payments in roubles would breach existing EU sanctions.

Ambassadors from EU countries will discuss the proposed oil sanctions when they meet on Wednesday.

The first civilians to be evacuated from a giant steel plant in Mariupol arrived on Monday in the Ukrainian-held city of Zaporizhzhia after an overnight bus journey across the front-line.

Ukraine says hundreds of civilians have been trapped inside the Azovstal plant along with the city’s last Ukrainian defenders. Dozens were able to leave on Sunday in an evacuation organised by the United Nations, the first to escape since Putin ordered the plant barricaded last week.

Captain Sviatoslav Palamar, 39, a deputy commander of Ukraine‘s Azov Regiment, told Reuters from inside the plant that fighters could hear voices of women, children and elderly people trapped below ground, and lacked the equipment to dig them out.

“We were planning to tear up the bunkers, the entrance to which is blocked, but all night into Monday naval artillery and barrel artillery were firing. All day today aviation has been working, dropping bombs,” Palamar said by Zoom.

Efforts to organise the evacuation of civilians from other parts of the city, now held by the Russians, ran into delays. Ukraine says 100,000 people are still in the ruined city, enduring desperate conditions after months of Russian siege.

“Our house is completely destroyed. We had a two-story building, it’s not there anymore. It burned to the ground,” said Natalya Tsyntomirska, a Mariupol native who reached Zaporizhzhia on Monday in a funeral service van.

Zelenskiy said the evacuation effort was continuing and he expected more movement of people through humanitarian corridors on Tuesday from Berdyansk, Tokmak and Vasylivka.

For its part, Kyiv hopes a massive influx of Western military aid will allow it to repel that assault and then turn the tide with a counter-attack.

Russian forces shelled the city of Kharkiv five times on Monday, injuring five people, according to regional governor Oleh Sinehubov. Further south, Izyum remained a battleground, with most of the houses in the city destroyed, he said.

After being forced to abandon an assault on Kyiv at the end of March, Russia launched a major offensive in eastern Ukraine focused on the Donetsk and Luhansk provinces, parts of which were already held by Russian-backed separatists before the invasion. Russian troops are now trying to encircle a large Ukrainian force there, attacking from three directions with massive bombardment along the front.

Ukraine‘s military said on Monday Russian forces were trying to take over the frontline Luhansk province town of Rubizhne and prepare an assault on nearby Sievierodonetsk.

The heaviest clashes were taking place around Popasna, farther south. Shelling was so intense it was not possible to collect bodies, said regional Governor Serhiy Gaidai.

​”I don’t even want to speak about what’s happening with the people living in Popasna, Rubizhne and Novotoshkivske right now. These cities simply don’t exist anymore. They have completely destroyed them.”

Russia has also been striking targets far from the front line with missiles. A 14-year-old boy was killed and a 17-year-old girl was wounded in a missile strike in the southern port of Odesa when a missile hit a dormitory, Zelenskiy said.