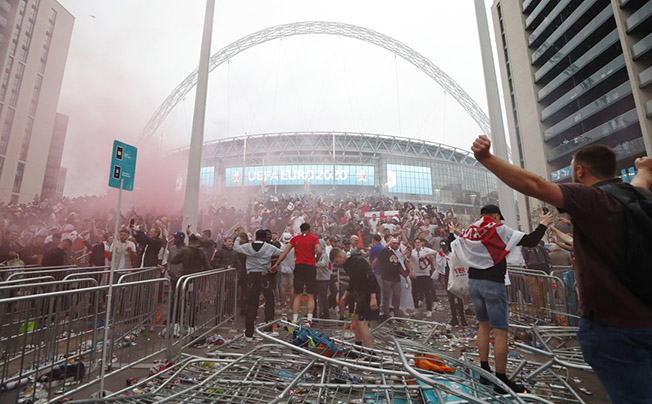 The chaotic and violent scenes at last year’s Euro 2020 final at Wembley can never be repeated, according to UEFA president Aleksander Ceferin.

An independent review of the disorder at London’s national stadium last July identified more than 20 “near-misses” that could have resulted in serious injury or death.

Wembley remains in favour with Ceferin and UEFA, and the stadium will host its inaugural ‘Finalissima’ match between Italy and Argentina next month, as well as the final of the Women’s Euro later this summer.

A UK and Ireland bid for Euro 2028 – where Wembley would almost certainly host the final – is also the strong favourite to succeed.

But Ceferin insisted the lessons of last summer had to be learned.

“The images of violence at Wembley Stadium at last year’s Euro final were unacceptable,” he said in his speech to UEFA Congress in Vienna.

“When a family goes to see a match of the Euro or of any competition, it’s time for fun, for enjoyment, for watching football.

“People should feel safe in and around a football stadium. They should never ever feel danger and they felt danger. With the authorities’ help, this cannot happen again. Never.”

The reckless behaviour of ticketless individuals who tried, and in some cases succeeded, to gain entry to Wembley for the England v Italy match on July 11 created the extremely high likelihood of fatalities, a security expert who contributed to the Baroness Casey review published in December said.

The review found there was a collective failure from all those involved in organising the final to plan for the worst-case scenario, but did not apportion blame to any single agency. Instead, Casey held the individuals involved in the disorder responsible.

Football Association chief executive Mark Bullingham said at the time: “The review makes clear that the circumstances leading up to the match led to a perfect storm of lawlessness.

“No event is set up to deal with such disgraceful behaviour from thousands of ticketless fans. Collectively we must never allow this to happen again.

“Baroness Casey is clear that moving forwards, where there is an event of national significance, we and all agencies must view it through a different lens.

“I would like to thank everyone who worked at the match that day. Many people went well above and beyond their roles and performed their duties with courage and determination. This was often at personal risk to themselves.

“The lessons learned from this review will ensure that fans have a good experience at major international events at Wembley, as they have for many years.”