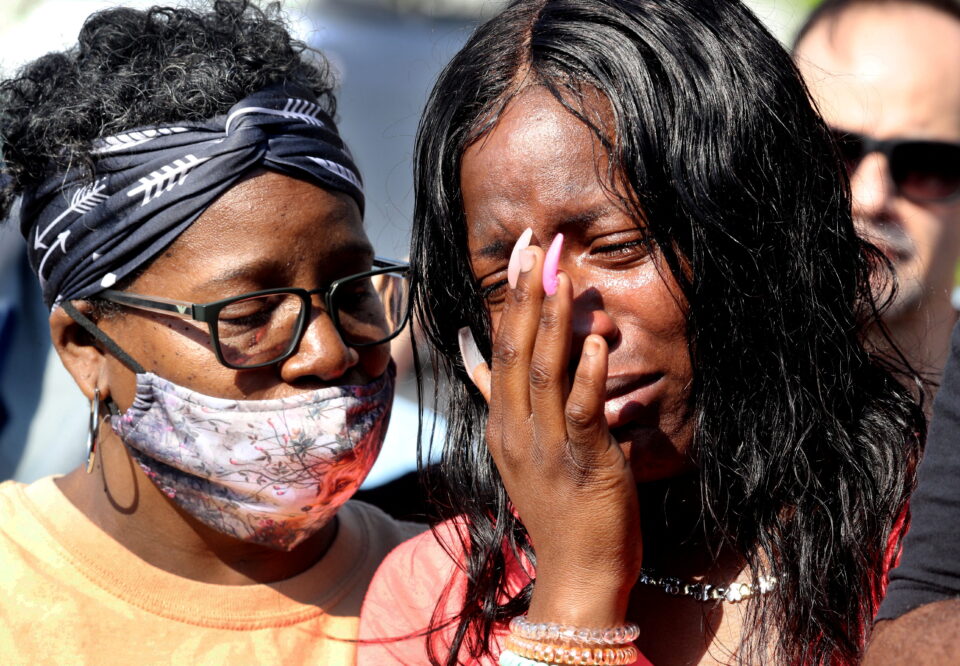 Julie Harwell, who was in the TOPS supermarket when the gunman opened fire, is consoled during a prayer vigil Seth Harrison/USA Today Network via REUTERS

An investigation into the shooting of more than a dozen people in Buffalo, New York, turned on Monday to whether early warning signs of the attack were missed, as public figures decried the suspect’s racist ideology and the spread of white supremacy.

Authorities said Payton Gendron, 18, carried out an act of “racially motivated violent extremism” when he opened fire with a semi-automatic rifle on Saturday at the Tops Friendly Market in Buffalo, where 11 of the 13 struck were Black.

“The evidence that we have uncovered so far makes no mistake this is an absolute racist hate crime that will be prosecuted as a hate crime,” Buffalo Police Commissioner Joseph Gramaglia told reporters on Sunday.

Besides seeking a clearer understanding of the motives for Gendron’s attack, investigators will focus on what could have been done to prevent the massacre, as details of the teenager’s troubling behavior in high school and his online presence emerge.

Buffalo police said authorities were examining a 180-page manifesto that Gendron appeared to have written and posted online that outlined the “Great Replacement Theory,” a racist conspiracy theory that white people were being replaced by minorities in the United States and elsewhere.

The teenager appeared on the radar of local law enforcement last June, when police detained him after he made a threat at his high school, Gramaglia told reporters. He was given a mental health evaluation and released after 1-1/2 days.

At a news conference on Monday, attorney Ben Crump called on officials to define Saturday’s attack as an “act of domestic terrorism.”

“We can’t sugarcoat it, we can’t try to explain it away talking about mental illness. No, this was an act of domestic terrorism perpetrated by a young white supremacist,” Crump said, surrounded by the weeping family of Ruth Whitfield, an 86-year-old woman who was slain.

“History has taught us that what begins with words ends in far worse,” the Republican congresswoman said.

The Buffalo attack follows racially motivated mass murders in recent years, including the Atlanta spa shootings of March 2021, in which a white man killed eight people, targeting Asians, and a Pittsburgh synagogue attack in October 2018 that killed 11.

The Justice Department is investigating the massacre as a hate crime and an act of racially motivated violent extremism, U.S. Attorney General Merrick Garland said.

President Joe Biden and first lady Jill Biden will visit Buffalo on Tuesday, the White House said in a statement.

Gendron drove to Buffalo from his home several hours away on Friday, a day before the assault, to do a “reconnaissance” of the area, authorities said.

On Saturday afternoon, dressed in tactical gear, he opened fire with a semi-automatic rifle he had bought legally, but then modified illegally. Law enforcement found an additional rifle and a shotgun in his car.

He surrendered to police after the shooting and was charged with first-degree murder, which carries a maximum term in New York of life in prison without parole. He has pleaded not guilty.

Authorities found evidence that Gendron was planning to continue his attack, possibly at another large store nearby, if he hadn’t been stopped, Gramaglia told ABC News on Monday.

“He had plans to continue driving down Jefferson Ave. to shoot more Black people,” Gramaglia said.

Social media and streaming platforms such as Twitch, which said it removed the livestream within two minutes, have grappled for years with the task of controlling violent and extremist content.

“The user has been indefinitely suspended from our service, and we are taking all appropriate action, including monitoring for any accounts rebroadcasting this content,” a Twitch spokesperson said.