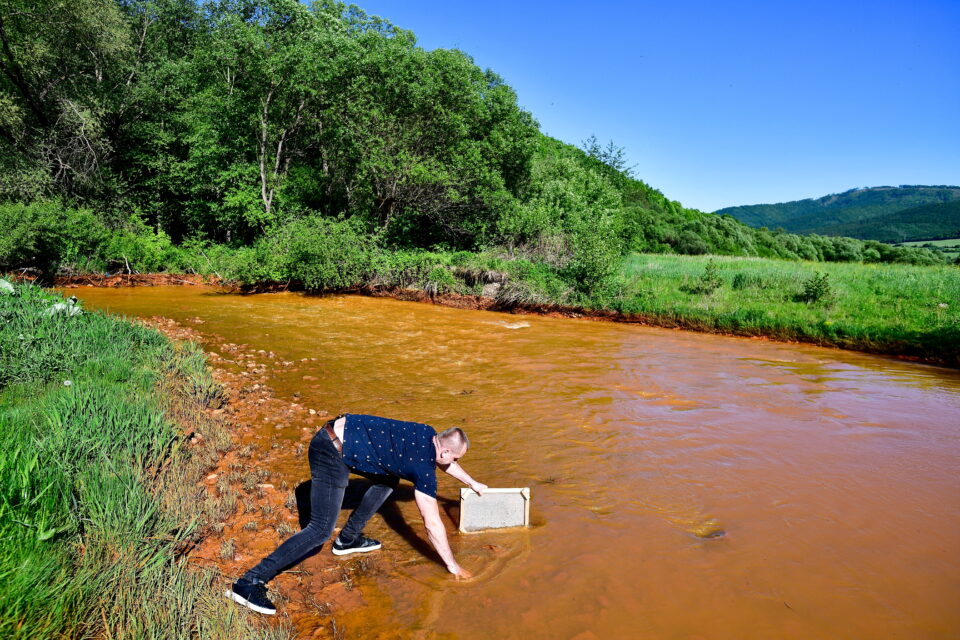 Tibor Varga, a local angler and activist, searches for live animals in the Slana river polluted by water containing high levels of iron from an iron ore mine near Nizna Slana, Slovakia

Polluted water flowing from an iron ore mine in eastern Slovakia has turned the Slana River orange, killing fish and wildlife on a long stretch before it reaches Hungary in what is fast developing into an ecological disaster.

Slovak authorities say they are taking steps to reduce the amount of polluted water stemming from the mine, which is state owned.

But further up on the river in the Slovak village of Nizna Slana, where the mine is located, locals are in despair.

Tibor Varga, 35, a local surgeon and keen angler, has been monitoring the river since February when the pollution started and says he has witnessed the slow death of wildlife due to the river’s high content of iron and zinc.

“There is no living creature underneath the pebbles, we can see only rust,” he said, lifting a fresh sample.

“This high iron content covers the gill of the fish and… reduces the surface where the fish breathe, and they start to suffocate.”

The Rudne Bane mining company said the water flowing into the river was underground water emerging from a flooded iron ore pocket, which had been mined until 2008.

Its director Peter Zitnan told Reuters that “due to chemical reactions, some metals and other materials got into the water which flows out,” adding the colour was due to a high level of iron. He said it was not a poisonous leak.

Rudne Bane filed a criminal complaint against an unknown perpetrator, he said, adding the company was preparing a public procurement procedure for a process which would release uncontaminated water from the higher levels of the mine directly into the river.

The Hungarian water authority is taking regular samples of water from the Slana, called Sajo on the Hungarian side, but said the river on its side had only occasionally turned “slightly brown” and due to substantial dilution the pollution had not damaged water quality or killed fish in Hungary.

The Slovak economy ministry said it told Rudne Bane on May 13 to ensure that water is not flowing into the deeper parts of the mine, and asked the finance ministry to release 200,000 euros to alleviate the situation, adding the mining company “was not responsible for the situation which has been brewing over the past 10 years.”

The Slovak environment ministry said checks at the closest point to the Hungarian border showed levels of possibly dangerous materials or elements did not exceed accepted or “in norm” levels despite the river still being of red-orange colour.

In the Hungarian parliament, state secretary Balazs Orban said this week that polluted water from the Nizna Slana iron mine has been flowing into the river without any dilution or treatment, which “has caused a serious ecological catastrophe on the Slovak part of the river.”

He said the two countries’ authorities were cooperating all the time.

But residents in the nearby Slovakian villages and in Sajopuspoki, the first village along the river in Hungary, want measures put in place quickly to stop the pollution.

“It is a catastrophe. And some say that we can eat the fish. Well, I will cook it for anyone who catches fish here, if any are left at all,” said Janos Ragyina, a resident of Plesivec, as he walked his dog along the riverbank.

Fields of narcissus, or ‘May snow’, cover Swiss meadows