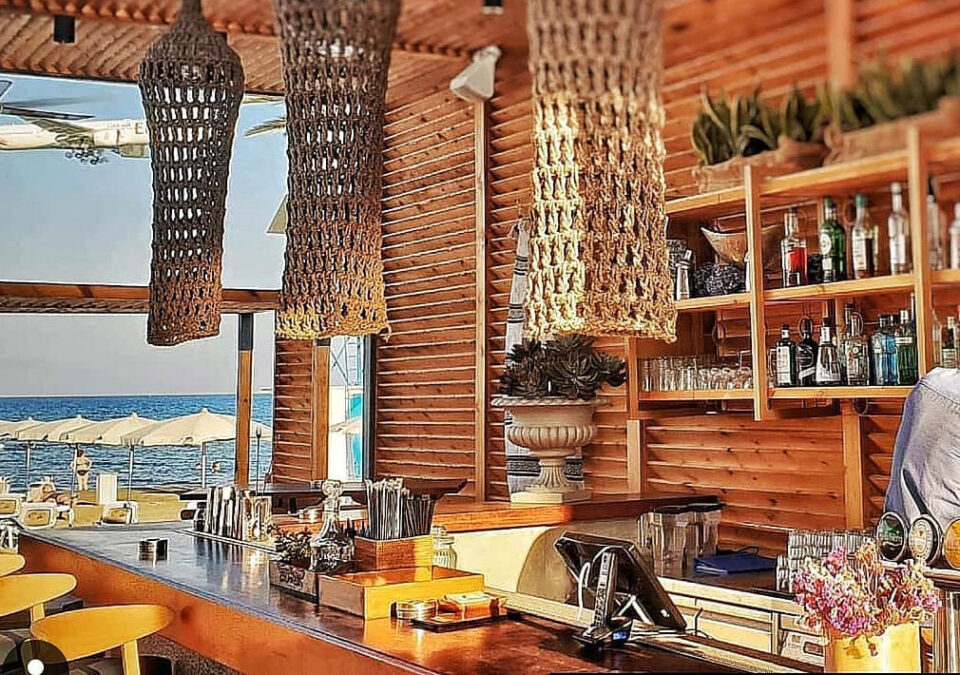 Our decision to go out for lunch was akin to using a Venn-diagram. The dust having subsided, we wanted to enjoy the decent weather! Wanting to take advantage, we headed down to the Mackenzie beach area to find a restaurant where we could sit by the sea. Another reason we like Mackenzie is because there is something mesmerising about watching the planes fly overhead and landing in the nearby airport.

We decided on Almar seafood bar, where we were given a beautifully positioned table. The whole place has a modern, stylish feel about it. They have somehow managed to make it look like both a hip seaside restaurant and pass it off as a trendy beach bar. Being a fish restaurant, there are a few nautical themed decorations scattered about as well.

The staff seemed very attentive, buzzing round the tables and handing us menus while telling us to ask if there was anything we needed help with. The menu is quite extensive. There are no ‘traditional’ starters per se but there were salads, dips and cold dishes such as octopus and salmon carpaccio or perhaps the sea bass ceviche that could be ordered for the table to share if you feel the need for a starter.

There is also a decent variety in the hot dishes section. The ‘prawns sheftalies’ stood out as a somewhat strange combo but everything else was described beautifully and so it was tricky to make a decision! The pasta/risotto section covers any cravings you might have for that type of dish. If you fancy going a little more upmarket, you can refer to dedicated sections for lobster, oysters, mussels and clams. There is, of course, a kids section with the ever reliable chicken fingers and spaghetti. 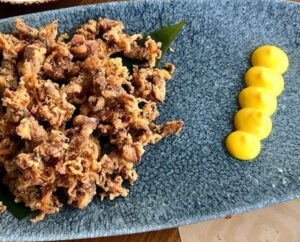 After perusing the menu for a while I opted for the grilled octopus, served with fava puree and a lemon dressing. Other dishes ordered were the salmon risotto and the less adventurous fried baby calamari. Dishes are not served with sides and as such, they must be ordered separately. I was fine with my fava puree being my side but the freshly cut French fries were ordered to accompany the calamari.

Soon after ordering, we were brought warm, homemade bread and a small pot of olive oil for dipping. The bread was so soft and warm we had to be careful to not fill up! We had also ordered some tahini and while you’d think that tahini is just a standard dip, this was somehow really tasty and very moreish! 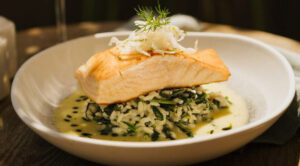 The food soon arrived and my octopus was fantastic. It could not have been cooked more perfectly. It was so soft that cutting it could be compared to a warm knife gliding through butter! The fava puree was a perfect accompaniment and I was feeling very pleased with myself for choosing it. However, the others were not as impressed with their food as I was. The salmon had been slightly overcooked and so was a little dry in the middle. My dining partner also felt that the risotto was a little on the salty side. I tried a little and thought it was ok but then again, I hardly had a mouthful so perhaps not in the best position to judge. The French fries that came out with the calamari were superb. They were indeed freshly cut, piping hot and crispy! However, as with the salmon, the calamari was a little over cooked, making it a little rubbery.

Feeling like I was on a roll with making good choices, I also ordered an Old Fashioned cocktail. Not the most challenging of cocktails to make but unfortunately, so many places just don’t seem to be able to get it right. The drink arrived, I took a sip and felt a little smug that yet again, I had made a brilliant choice. I’ll go out on a limb and say that it’s one of the best I have had in quite a while!

Although the main dishes are reasonably priced, the sides are a little on the pricey side. Overall though, the bill was a respectable amount considering what we had and our location at a trendy restaurant by the sea. I’m not sure my dining partners will be rushing back to Almar but, I’ll be going again and taking my lucky cap with me in the hope of maintaining my hot streak and ordering another remarkable dish.

Court to convene in hospital after man shoots son (updated)

Cyprus News Digest: Cypriots can travel again to the European mainland by sea