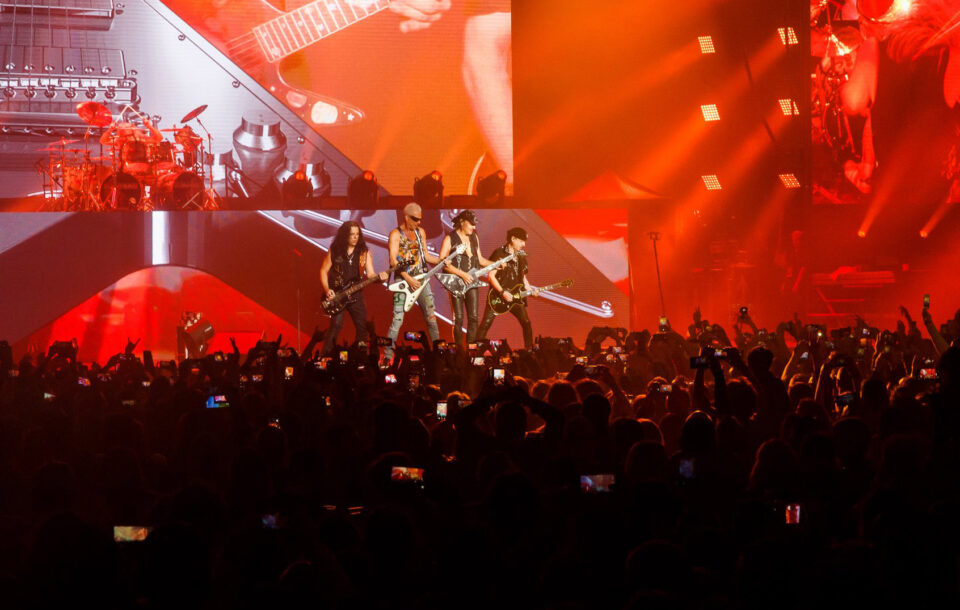 At an age where most people are slowing down, Scorpions are on a European tour, which includes a date in Cyprus. Alix Norman finds out more

Well into their 70s, Scorpions are still rocking like a hurricane. No wind of change has stopped this iconic band; they’re still composing, playing, and touring the world. And, on July 12, at an age when the majority of us are enjoying a quiet crossword of an evening, the members of Scorpions will be up on stage at the Tsirio Stadium, delivering a spectacular two-hour concert!

This isn’t the first time Scorpions have played to local audiences: July 12 will be their fourth concert on the island. And, despite the fact that they’ve been rocking for over half a century, the band is still as incredible as ever says founder of Moonlight Show Productions, Helen Katsamba.

It was Moonlight who were responsible for Scorpions’ previous visits, and Helen well remembers each concert of the three shows. “2004, when they appeared at GSP, was the first time the band played Cyprus and it was a huge success,” she recalls. “Then in 2006 we brought them again, this time to Tsirio in Limassol. And, in February 2019 just, they played a sold-out concert at Spyros Kyprianou Stadium. It was completely packed,” she adds. “It seemed like everyone on the island was there. But then that’s the thing about Scorpions music – it appeals to all ages, all nationalities, and all backgrounds.”

Unlike the world-famous DJs (including Tiesto and Van Buuren) that Moonlight regularly brings to Cyprus who attract a mostly younger audience, Scorpions transcend the age barrier, Helen acknowledges. “It’s the kind of music that everyone loves, young and old alike,” she suggests. “They do this incredible sort of melody rock like nobody else: songs that are both beautiful and moving, but also incredibly memorable; songs that touch your heart. 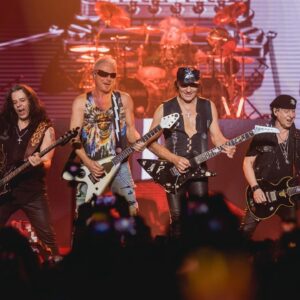 “So you get younger people, parents and grandparents all singing along to ‘Wind of Change’, ‘Still Loving You’, and ‘Angel’ – it’s just a fantastic experience for everyone! And you can see that the band have lost none of their energy over the years – they still put on a show that’s just as spectacular as when they first came to Cyprus!”

The upcoming concert will see the band members (all of whom are well into late middle age) promoting their latest album, written over the course of the pandemic. “For the last couple of years, they’ve been writing and recording Rock Believer,” says Helen. “And now they’re taking it live across the world…”

Coming off a one-month tour in Las Vegas and a huge show in New York, the German band are now back on their own continent, where they’re performing in almost every major city from Helsinki to Warsaw, Munich to Zurich. “They’re on their way here from Israel,” says Helen. “And then they’ll be straight off to France and Portugal. I don’t know where they get their energy!”

Helen, who has met the band several times over the years and has even been invited to travel with them on occasion, attests that the band are all “wonderful people, as well as legendary musicians. They’re not at all what you’d expect from a rock band,” she laughs, “There’s certainly no smashing hotel rooms or wild demands: they’re all lovely, quiet family guys who travel with their wives; well-mannered and kind. Off-stage, it’s clear how much they enjoy each other’s company, and how well they get along with each other. And on-stage, you can see their talent, and their love of performing.”

Tickets for the concert have been on sale from April, and are already selling fast, says Helen. “We have 12,000 seats in Tsirio for sitting and standing,” she continues, “and I reckon we’ll have sold out by July. And not only to locals – I’ve already had a few groups who will be flying in from Egypt and Dubai especially for the concert, as well as another large group from Edinburgh who are combining their island holiday with this spectacular rock show!”

While Scorpions are currently the only major act that Moonlight has booked for Cyprus this summer – “most of the DJs we usually bring are still catching up on tours postponed during the pandemic,” says Helen. “Although you never know who might have time for a quick visit, so do watch this space!” – next year will see another iconic artist on the island. 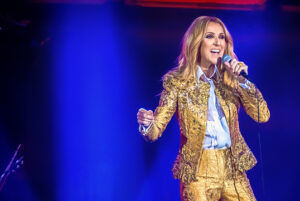 “In 2020, we’d confirmed Celine Dion for a show in Nicosia,” says Helen. “Of course the pandemic got in the way, and the concert never went ahead. Those who requested it had their tickets refunded. But those who didn’t will find their tickets are still perfectly valid for June 2023 – because the legendary singer will be here on the island for a one-night-only performance!”

This will be Dion’s first time in Cyprus, so Helen expects remaining tickets to sell out almost immediately they go on sale early next year. “She will be performing at GSP Stadium, and it will be a great opportunity to see one of the most iconic and best-loved singers in history. And despite what you might think, there’s quite a crossover in fans with Scorpions,” she reveals. “There’s a lyrical quality, an energy, a charisma to both acts that has propelled them – and kept them – at the top of their game for decades now!”

For the time being, though, it’s Scorpions that will be wowing local audiences. “We’ll get all the classic songs, as well as the new, and we’ll be able to sing along to all. This is a concert that, I promise, will be ‘Dynamite’!”

Scorpions are performing at Tsirio Stadium in Limassol on July 12. Tickets are already on sale, and are available from www.soldoutticketbox.com and all Stephanis stores. For more information, call 7000 7066