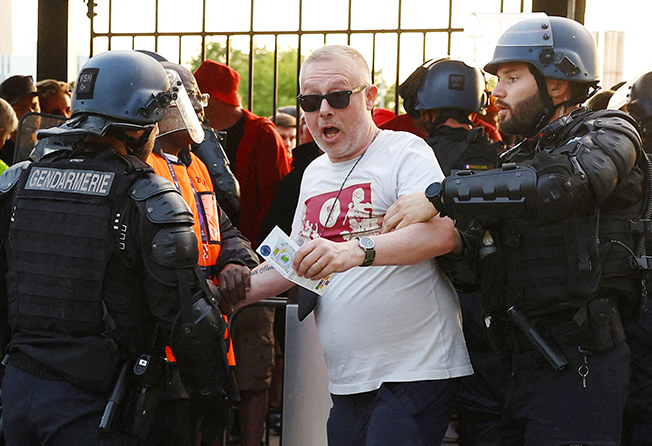 Saturday night's Champions League final was delayed by more than 35 minutes after police tried to hold back people attempting to force their way into the Stade de France without tickets. Some ticket holders complained of being tear-gassed and that they were not let in

French interior minister Gerald Darmanin insisted there was “industrial level” fraud as he blamed fans with fake tickets for the problems ahead of the Champions League final.

The French authorities are coming under increasing pressure for their handling of Liverpool fans on Saturday but claim the influx of supporters with fake tickets was the biggest issue.

“There was massive fraud at an industrial level and organisation of fake tickets, 70 per cent of tickets were fake tickets coming into the Stade de France, ” Darmanin told a press conference.

“More than 2,600 were confirmed by UEFA as non-validated tickets even though they had gone through the first filtering.

“The massive presence of the fake tickets was the issues which meant there were delays, three times the match was delayed.

“We had a long meeting where we had exactly the same interpretation with what happened.

“I would like to express our regret with regard to the organisation of the final because some people were not able to see the whole of the match. I deplore the errors which took place before.”

The chaotic scenes which marred the match at the Stade de France came under the spotlight at a meeting in Paris on Monday.

Representatives from local authorities, police and final organisers were meeting to review events outside the stadium during which Liverpool fans queueing for admission were tear-gassed.

“The major point is to try to understand precisely what happened during this massive fraud,” she said. “There are witnesses and the figures corroborate this, 30,000-40,000 people without tickets or with fake tickets and we saw some fake tickets.

“We can see they are professional and that’s meant some controls didn’t notice it. We want there to be a very detailed, in-depth inquiry with UEFA.

“We are waiting for the rapid setting off of this inquiry.”

British MPs called for an investigation amid condemnation of the way the Premier League club’s supporters were treated.

Ian Byrne, the Labour MP for Liverpool West Derby, attended the match in Paris and said he had never witnessed such scenes since the 1989 Hillsborough disaster. He has written to Foreign Secretary Liz Truss with a list of seven demands, including a formal probe and apologies, aimed at UEFA and the French authorities.

In his letter, he said: “The French authorities and UEFA are quite simply covering their own backs with this narrative.

“As a Liverpool fan, I was in Paris for the match and I can honestly say that the situation outside the ground was one of the most horrendous experiences of my life – and as a Hillsborough survivor, I do not make this comment lightly.”

Merseyside Police observers described the behaviour of the vast majority of supporters as “exemplary”, while their counterparts from the Paris prefecture said some had “employed strong force” in a bid to get into the stadium.

Liverpool, who lost 1-0 to Real Madrid, have “officially requested a formal investigation into the causes of these unacceptable issues”, while CEO Billy Hogan told LFCTV the treatment of fans was “absolutely unacceptable” and that “people’s safety was put at risk”.

Culture Secretary Nadine Dorries said: “I urge UEFA to launch a formal investigation into what went wrong and why, in co-ordination with stadium staff, the French police, the French football federation, Merseyside Police and Liverpool Football Club.

“It is in the interests of everyone involved to understand what happened and to learn lessons from these events.”