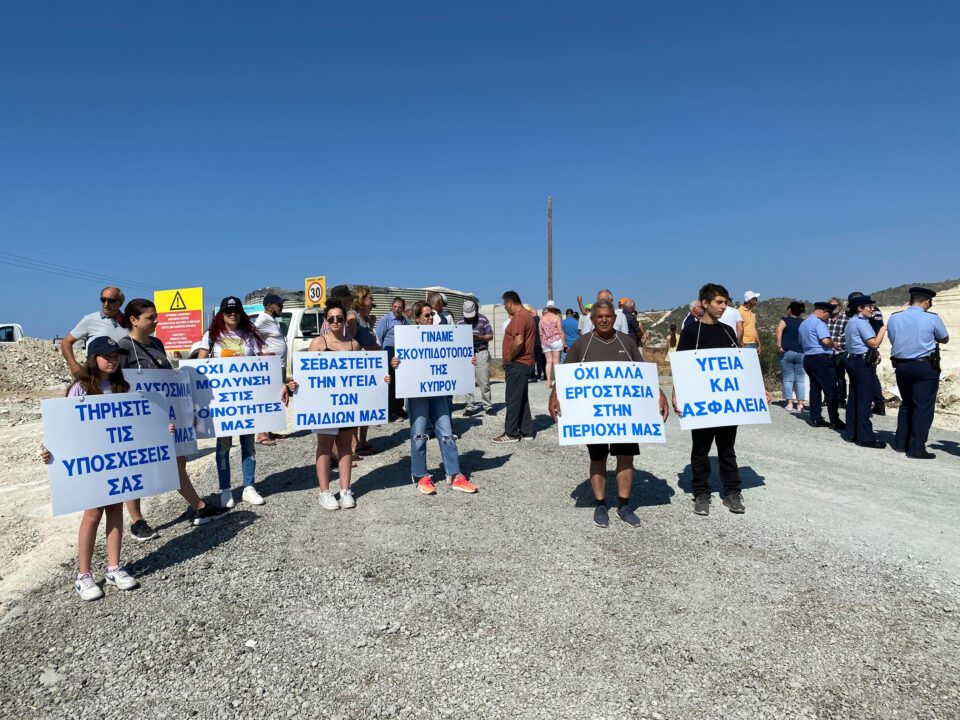 A previous protest by the communities near Vasiliko

The anger of residents near Vasiliko, after a tyre fire in the area at the weekend, is ‘completely understandable’, Agriculture Minister Costas Kadis said on Tuesday.

Speaking on Trito radio, he said the findings of the report by the environment department regarding the fire that broke out in piles of tyres in the quarry area will be ready on Wednesday.

The report will include the exact conditions of licensing of the tyre management unit and whether those were implemented and checked. It would also look into whether the audit office recommendations, published last year, were taken into account.

Kadis highlighted that things did not work as they should have, explaining that during his visit at the site he found that the tyre separation lanes were too narrow.

Cyprus imports about 500,000 to 600,000 tyres annually, said the leader of the Green Party Charalambos Theopeptou in his own statements to the radio station. Those are not recycled on the island, he added, explaining that companies are paying to have their tyres stored at the Vasiliko cement plant.

Following Saturday’s fire which produced thick black smoke that could be seen along the highway and some Larnaca beach fronts, nearby residents held an impromptu protest on Monday.

In response, authorities said human health was not directly threatened by the blaze.

The fire broke out on Saturday afternoon in an open area filled with old tyres between the villages of Kalavasos and Mari.

It took eight fire engines and a team of 25 firefighters working around the clock to bring the fire under control by midnight.

Two fire engines remained at the scene on Monday to monitor the fire, which was still not completely out due to the highly flammable nature of the tyres.

She added that the competent services are carrying out sample checks and will continue to do so to gauge the impact on the ground.

“It was fortunate that the mobilisation of all services was immediate: the interior ministry, civil defence, the meteorology department, the environment department, were all on site,” she said.

The director of the environment department, Costas Hadjipanayiotou, who was at the scene on Saturday afternoon said it appeared the fire was caused by a malfunction in a tyre shredder that ignited the spark that led to the blaze.

Hadjipanayiotou said the tyres were there in accordance with the required permits.

Vasiliou said that the government’s developing mechanism for preventing environmental risks is constantly improving through the challenges faced in recent years. “There are some shortcomings, which are of an administrative nature, and are in the process of being corrected”.

Meanwhile, local residents gathered at the old Vasiliko quarry around 9am on Monday to protest, using it to illustrate their enduring opposition to the relocation of even more heavy industrial plants in the area.

Many held signs reading “No more pollution in our communities”, “Respect our children’s health” and “No more factories in our area”.

Speaking to the media, residents asked for measures to be taken to avoid similar fires in the future, saying that the most recent one will undoubtedly have unprecedented health repercussions for them and their children after they inhaled its toxic fumes.

Chairman of the coordinating committee of the local communities, and Mayor of Kalavasos, Lefteris Foka said that the communities staged their impromptu gathering “to express our concern and complain as the state is unable to protect us”.

“Not a single phone call was made to inform us whether we are in danger, whether we need to tell people to stay home or even if we need to evacuate our communities,” Foka said, adding that there was only one late-night call from civil defence instructing them to stay alert.

This shows indifference on part of the state, he said, made evident by the decision to move the entire island’s heavy industry in their area. “This is why we have gathered here today, to express our opposition against any new factories in our area”.

He repeated the communities would not accept the planned relocation of the Dhali asphalt plants, a subject of much protest, to their area.

The recent fire was the last straw, he said while threatening further measures if the communities’ demands were not heard.

But the commissioner rushed to explain that she had been in touch with the competent services and was aware that the data assessments did not raise any concerns of a direct impact on human health.

“Therefore, I speculate that mobilizing a warning or evacuation would cause unnecessary panic”.

Without referring to the specific fire, Vasiliou stressed that black smoke should be avoided “at all costs”.

Asked if the smoke stays in the atmosphere for days, she said that it depends on the weather conditions, wind, and whether it rains or not.

Some of the particles that may have landed on the ground will be examined through analyses by the relevant services in the coming days to give concrete results on whether the earth has been affected and where, she added.

Only last year, the audit office revealed that a company being paid to process massive quantities of used car tyres for Vasiliko was failing to do so.

In a tweet on Saturday, the audit office said it had pointed out the risk of fire from the accumulation of large quantities of tyres in that very area “at a time when some people collect fees to process the tyres”. There had been another fire involving tyres in the same area in the past, the tweet said.

Vasiliko cement works plant is the main management and processing unit for used tyres and it uses these tyres as a source of energy for its operational needs.