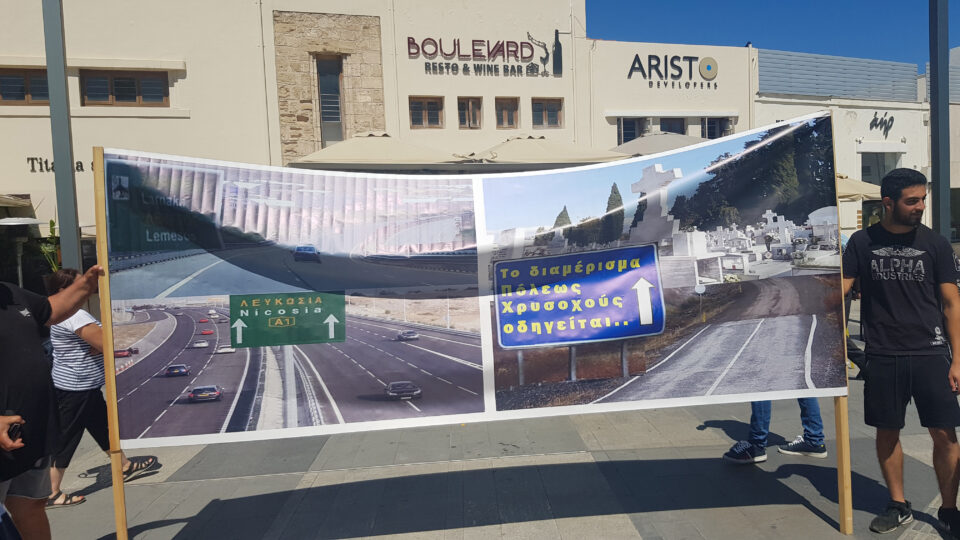 The landowners banners make the suggestion that while other districts are thriving, their communities are dying (Photo: CNA

The state must respect Akamas’ natural environment but also the residents in the area’s communities, landowners from the peninsula said during a protest on Saturday morning.

Gathered at Kennedy square in Paphos, people from the municipality of Polis Chrysochous Peyia and Inia community demonstrated for their rights in light of the announcement of the revised Akamas development plan.

A delegation from the participants delivered a written petition to the Paphos district officer, Mary Lambrou, to be subsequently given to Interior Minister Nicos Nouris and President Nicos Anastasiades. The memorandum, signed by over 2,500 people, sets out the positions of affected landowners regarding the Akamas local plan as well as a legal opinion on their “constitutional rights”.

At about the same time, another Akamas protest by environmental groups was taking place with representatives from the Green Party outside the Paphos town hall.

The revised plan promoted the ‘cementing’ of the area, activists said, while the refusal of the state to publish it was concerning.

A member of the Green Party, Alexia Sakadaki, said the interior ministry’s refusal to publish it was “in violation of the Aarhus convention as well.” The convention provides for people to receive environmental information held by public authorities.

For his part, the head of Friends of Akamas group, Kyriacos Tsimillis said he was against a scattered development in the thick wooded headland.

Their protest comes a week after demonstrators marched demanding the rejection of the Akamas plan last Saturday in Nicosia.

Speaking from their own protest, Inia’s community leader Yiangos Tsivigos slammed environmental organisations which, he said, “do not accept any development whatsoever and want Akamas to remain as it is.”

He added that their demonstration was scheduled days before and does not counter the protest outside the town hall which was against the development plan. Tsivingos wished the plan will be announced before the 2023 presidential elections in February.

On behalf of Droushia community, Stelios Kouparis said “we are not asking to build hotels but we are asking for some development and to help farmers and animal breeders.”

Locals had said there was a need for a rational development of the area, with full respect for the natural environment and biodiversity, but also taking into consideration the human factor.

Residents have been surviving with many difficulties for so many years in the communities of Akamas, while their properties have been ‘frozen’ for 33 years, they said in a written statement.

With reason and moderation, “there are no dead ends,” protesters added, explaining there must be co-existence between humans and the environment.

The golden mean should be found which will allow ‘soft development’ and for landowners to use of their property and help keep young people in the area, who are currently forced to work outside their villages.

However, any development must be guided by the principles of sustainability, they added.

They added that procedures for the operation of the Akamas National Forest Park should be completed within 2022.