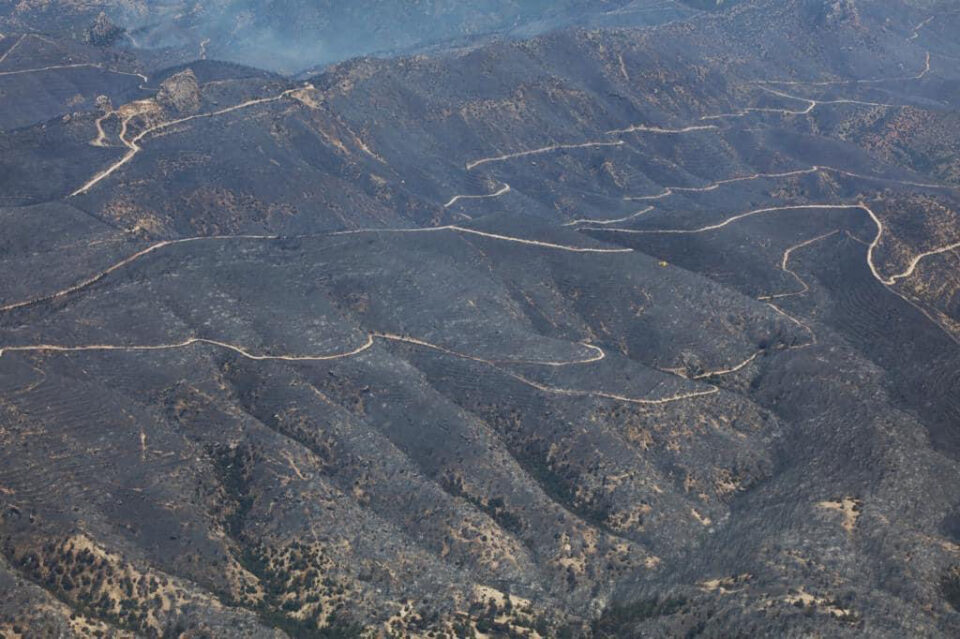 By Sarah Ktisti and Nick Theodoulou

All fires in the north were finally extinguished in the early hours thanks in part to heavy rain that hit parts of the island late Friday night, it was reported on Saturday.

The director of the forestry department Charalambos Alexandrou, told CNA that “while it was planned to send the aircraft of the Republic to help today, around six in the morning they informed us that the fire has been completely extinguished and there is no need for help “.

He added that the fires were finally extinguished with the help of Friday night’s rains.

After days of firefighting with help from abroad and from the Republic, the fire in Kantara had been brought under control on Friday afternoon but it was only a brief respite and the blaze broke out again in the evening on two fronts after winds changed direction.

At the time, Turkish Cypriot authorities declined more help from the Cyprus government who remained on standby in case. However storms hit some areas around midnight on Friday, which had worked in favour of the firefighters.

There was only a brief respite in the north on Friday after a devastating fire that began on Tuesday was nearly under control but reignited in the afternoon when winds changed direction.

On Friday afternoon, fires on at least two fronts in Akanthou – Mandra and Flamoudi were reported and the evacuation of Flamoudi was ordered.

In Akanthou, the ‘agriculture minister said the reignited front was moving towards the Pentadaktylos mountain range and efforts were being made from the air and over land to contain it.

Earlier on Friday, it was announced that the devastating Kantara blaze had been brought under control, according to the north’s firefighting service’s chief Ramadan Gurpinar.

In comments to Bayrak, carried by the Cyprus News Agency, Gurpinar stated that the fire was expected to be completely extinguished by afternoon. He added that small fires which had reignited had been dealt with by the aerial units.

Turkish Cypriot leader Ersin Tatar, citing information gathered by drones, said that by noon Thursday the blaze had burned through 12,000 acres of land. This was reportedly up to 16,000 acres later Friday.

The fire drew international support with up to eleven aerial units assisting in the efforts, numbering six planes and five helicopters.

The Republic of Cyprus sent aircraft to the north on Wednesday, while the British bases, Israel, the UN and Turkey also assisted.

On Friday afternoon Agriculture Minister Costas Kadis went to Larnaca airport to thank the Israeli crew – two planes and ten staff members – which assisted in the firefighting efforts. Prior to the Israeli unit’s return home, Kadis said that the joint effort further deepened ties and cooperation between the two neighbouring nations.

Michalis Loizides, Greek Cypriot head of the bicommunal environmental committee, said that while there are excellent relations with their Turkish Cypriot counterparts there are major hurdles which hinder problems from turning into catastrophes.

He told AlphaNews on Friday morning that climate changes and worsening environmental hazards make closer cooperation on crisis prevention and management of the utmost importance.

“We cannot allow our Cyprus to become a desert, to burn,” he said.

“They must allow us, who are not political actors, to proceed with the necessary actions,” Loizides emphasised.

He explained that if the firefighting aircraft is only permitted to enter the area 18 hours after the incident first broke out then “you’re managing a catastrophe, not a problem”.

Elsewhere, Turkey’s Vice President Fuat Oktay cut short his visit to the north and returned to Turkey as all of the related events have been cancelled.