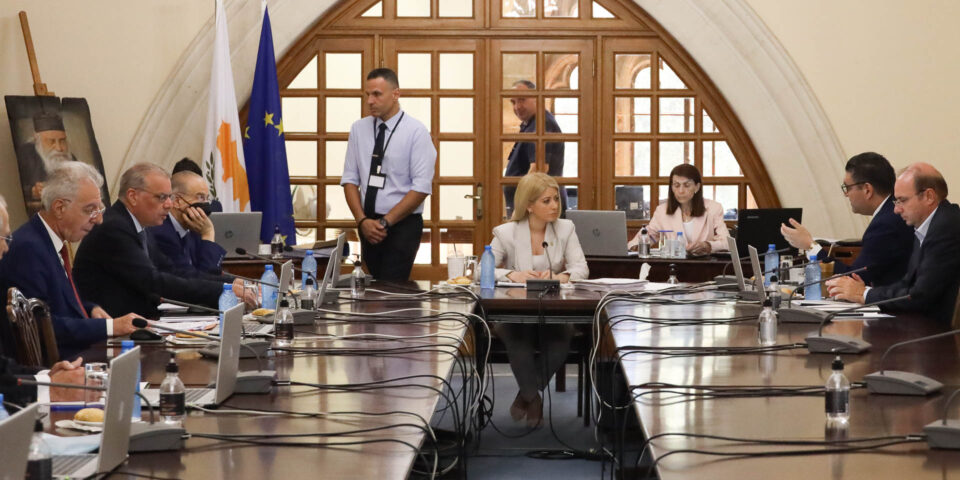 The Council of Ministers meeting on Tuesday

Face masks will become obligatory in pharmacies and laboratories this week, less than a month after their use became optional, the health ministry announced on Tuesday.

Following a recent increase in coronavirus cases and hospitalisations, which the health ministry attributed to the BA.4 and BA.5 variants, authorities have decided to reintroduce some restrictions to prevent the further spread of the virus.

The face mask mandate, lifted on June 1 in all spaces excluding high-risk areas such as hospitals and nursing homes, has been reintroduced in pharmacies, clinical laboratories and testing sites.

According to the health ministry, the measure, in force as of this Thursday, concerns both employees and the public.

The use of face coverings was advised for people belonging to vulnerable groups gathering in indoor places or those coming in contact with vulnerable people.

The health ministry also announced that the selling price of individual self-tests has been capped at €1.70 to stop profiteering.

According to an announcement last week, some sellers were claiming that boxes with five Covid self-tests, the price of which was capped at €6, were out of stock, and were selling individual self-tests for about €2. The new pricing will be implemented as of July 4.

A price ceiling was announced for the price of PCR tests at €30 instead of the current €50, to start as of June 30.

All existing measures will remain in place until July 31.

Reiterating its call for compliance with personal protection measures, the health ministry said “collective and individual responsibility has made a major contribution to the response to the pandemic.”.

The new measures were announced days after the publication of the health ministry’s latest coronavirus report on Friday, showing that the positivity rate reached 9.7 per cent as 7,263 Covid infections were detected during the previous week.

Meanwhile, state health services organisation Okypy spokesman Charalambos Charilaou had said that hospitalisations due to the virus more than doubled in the span of two weeks.

“On June 11 there were 24 coronavirus patients in hospitals, but as of today there are 52 in treatment, of whom three are in the high dependency unit and one in the ICU,” he said on Monday.

The spokesman also pointed out an uptick in outpatient clinic visits, which according to him is a tell-tale sign of a higher infection rate, especially considering there were many cases of lower respiratory issues – a common symptom of the BA.5 subvariant.

Furthermore, an increase in hospitalisations of children with coronavirus at Makarios hospital has been recorded in recent days, media reported on Tuesday. To date, seven children aged five and under are being treated at the facility, of whom four are infants under 12 months old.