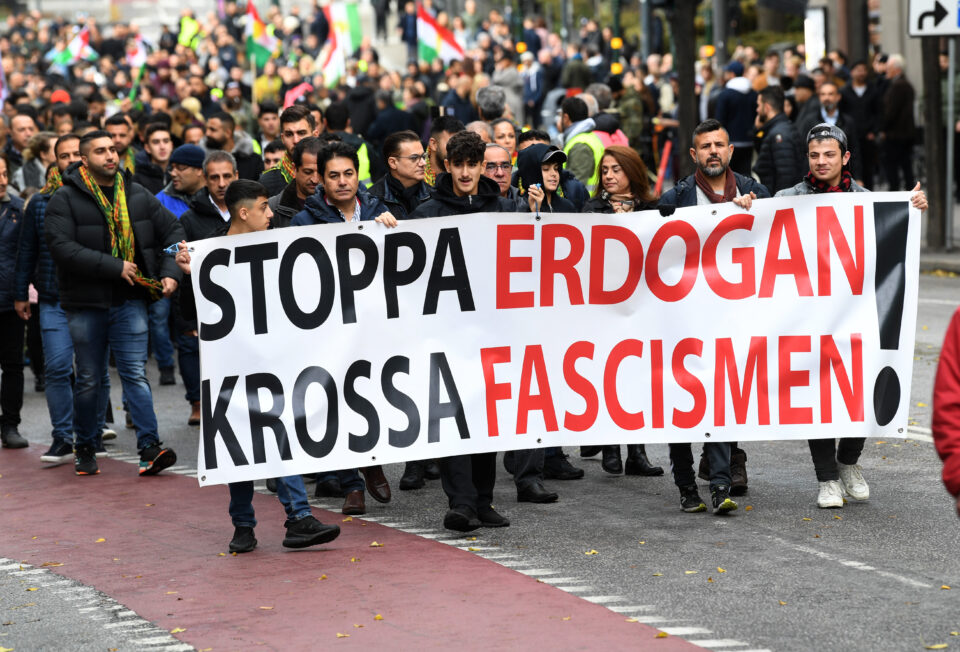 Kurds in Sweden’s large diaspora are worried they will become a pawn in the negotiations over Stockholm’s ambition to join NATO if the West makes concessions to win Turkish support.

Sweden, along with Finland, applied for NATO membership in response to Russia’s invasion of Ukraine, with their bids warmly welcomed as a “historic moment” by alliance chiefs.

But they have faced opposition from Turkey, which has been angered by what it says is their support for Kurdish militants and arms controls on Ankara over a 2019 incursion into Syria.

“We don’t want the Kurds to be on the negotiating table,” Shiyar Ali, the Scandinavian representative of the mainly Kurdish regions of northern Syria, said.

Any bid to join NATO, which holds a three day summit this week, requires backing from each of its 30 members. Turkey has been a NATO ally for over 70 years.

Sweden’s 100,000-strong Kurdish diaspora and Stockholm’s support for Kurds’ rights has long been points of friction in relations with Ankara.

“Sweden has been a thorn in Turkey’s side, criticising Turkish human rights abuses, there is a strong and vibrant Kurdish diaspora in Sweden, parts of which is sympathetic to the PKK,” Paul Levin, director at the Institute for Turkish Studies at Stockholm University, said.

“All these things fly in the face of the Turkish perspective on these issues that the PKK and their affiliates are an essential national security threat to Turkey.”

The PKK (Kurdistan Workers Party) has been waging an insurgency in Turkey since 1984 in which more than 40,000 people have been killed.

Sweden has long outlawed the PKK and says it only provides humanitarian aid to Syria and refugees in the region, mainly through international organisations.

At the same time as the NATO talks, Turkish President Tayyip Erdogan has threatened a launch a fresh incursion into northern Syria to recapture towns held by the Kurdish-led Syrian Democratic Forces, which are backed by Washington.

The Kurdish YPG militia are a key part of the SDF that controls large parts of north Syria and is regarded by Washington as an important ally against Islamic State. Ankara sees it as an extension of the militant PKK, branding it a terrorist group, while Western governments do not.

Aside from its anger with the two Nordic countries, Turkey has long been infuriated by other support for the YPG, notably from the United States, France and Germany.

All that has worried some Kurds, who fear they may pay the price to placate Turkey and secure Sweden’s place in NATO.

Facing a prison sentence, Osman Aytar, an ethnic Kurd, fled Turkey for Sweden in the 1990s.

“Kurds have been betrayed many times in history,” said Aytar, a 62-year-old associate professor in social work at the Malardalen University in eastern Sweden.

“Maybe Erdogan is betting that he can invade new parts of Rojava (the mainly Kurdish regions of northern Syria) and the West will be quiet just because of this NATO membership issue. If the West just shuts its eyes, he will be happy.”

The complex web of issues has put the Sweden government – admired around the world for its promotion of human rights and support for minorities – in a tough spot.

Only this month, the government survived a no-confidence vote with the help of a former Kurdish peshmerga fighter, who has demanded continued support for Kurds, further angering Ankara.

A lengthy and uncertain road to NATO membership would undermine Nordic security and weaken the alliance’s hand in the Baltic.

But meeting Turkey’s demands – which remain unclear – would damage Sweden’s reputation and could complicate the fight against Islamic State.

“We are worried that the Kurds become victims of the politics,” Ahmed Karamus, the Swedish co-chair of the Kurdistan National Congress, a Kurdish umbrella group, said.

While the Swedish Kurds spoken to by Reuters are confident the government will stand up to Turkey, the negotiations are an uncomfortable reminder of that the security of the autonomous area is dependent on the goodwill of others.

“I hope and I believe that Sweden will not make concessions that we will be ashamed of later,” Aytar said.