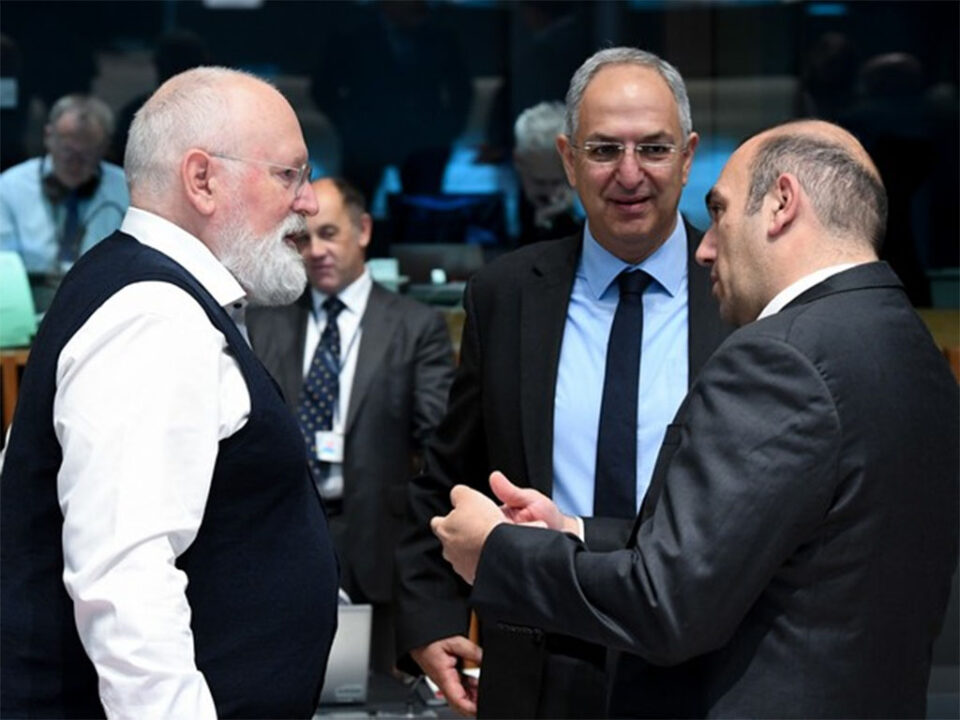 The two ministers with Frans Timmermans

The EU’s Fit-for-55 initiative to combat climate change approved by EU environment ministers is a balanced package that takes on board Cyprus’ concerns and will help it transition to a green economy, ministers for the environment and transport Costas Kadis and Yiannis Karousos said on Wednesday.

Both ministers participated in the EU environment council. Their joint statement was issued hours after the council backed the package that includes a 2035 phase-out of new fossil fuel car sales and a multibillion-euro fund to shield poorer citizens from CO2 costs.

“Today is a landmark in the EU’s efforts to address climate change,” the two ministers said adding that the agreement sets the foundations for the EU to achieve its ambitious target to reduce greenhouse gases by at least 55 per cent as part of the longer-term target of climate neutrality by 2050.

Agreement came after protracted consultations between EU member states as well as with EU institutions. “We now have before us a balanced agreement on the positions of the Council which opens the way to achieve the union’s aims in a fair, cost effective and competitive way,” the two ministers said.

Moreover, the agreement will contribute to a fair, green transition and allow the EU to fulfil its international obligations under the Paris Agreement.

“Through the Fit-For-55 package, Cyprus expects to have significant environmental benefit, as the new targets will achieve significant reductions in greenhouse gases,” they said.

Studies will be carried out to safeguard the air connectivity of island states to mitigate implementation costs of the package, they added.

The ministers drew special attention to the SAF Allowance Mechanism, which was included in the agreement following Cyprus’ proposal to cushion the blow from a transition to sustainable aviation fuels and help the connectivity of island states and isolated areas.

Reuters reported after more than 16 hours of negotiations, ministers from the 27 member states had agreed their joint positions on five laws that are part of a broader package of measures to slash planet-warming emissions this decade.

“The climate crisis and its consequences are clear, and so policy is unavoidable,” EU climate policy chief Frans Timmermans said, adding that he thought the invasion of Ukraine by top gas supplier Russia was spurring countries to quit fossil fuels faster.

Ministers supported core parts of the package that the European Commission first proposed last summer, including a law requiring new cars sold in the EU to emit zero CO2 from 2035. That would make it impossible to sell internal-combustion engine cars.

Italy, Slovakia and other states had wanted the phase-out delayed to 2040. Countries eventually backed a compromise proposed by Germany, the EU’s biggest car market, which kept the 2035 target and asked Brussels to assess in 2026 whether hybrid vehicles or CO2-neutral fuels could comply with the goal.

Timmermans said that the commission would keep an “open mind” but that today, hybrids did not deliver sufficient emissions cuts and alternative fuels were prohibitively expensive.

The climate proposals aim to ensure the 27-country EU – the world’s third-biggest greenhouse gas emitter – reaches its 2030 target of reducing net emissions by 55 per cent from 1990 levels.

Ministers backed a new EU carbon market to impose CO2 costs on polluting fuels used in transport and buildings, though they said it should launch in 2027, a year later than initially planned.

After fraught negotiations, they agreed to form a €59-billion EU fund to shield low-income citizens from the policy’s costs over 2027-2032.

Ministers also rallied behind reforms to the EU’s current carbon market, which forces industry and power plants to pay when they pollute.

Countries accepted core elements of the Commission’s proposal to reinforce the market to cut emissions 61 per cent by 2030 and extend it to cover shipping. They agreed on rules to make it easier for the EU to intervene in response to CO2 price spikes.