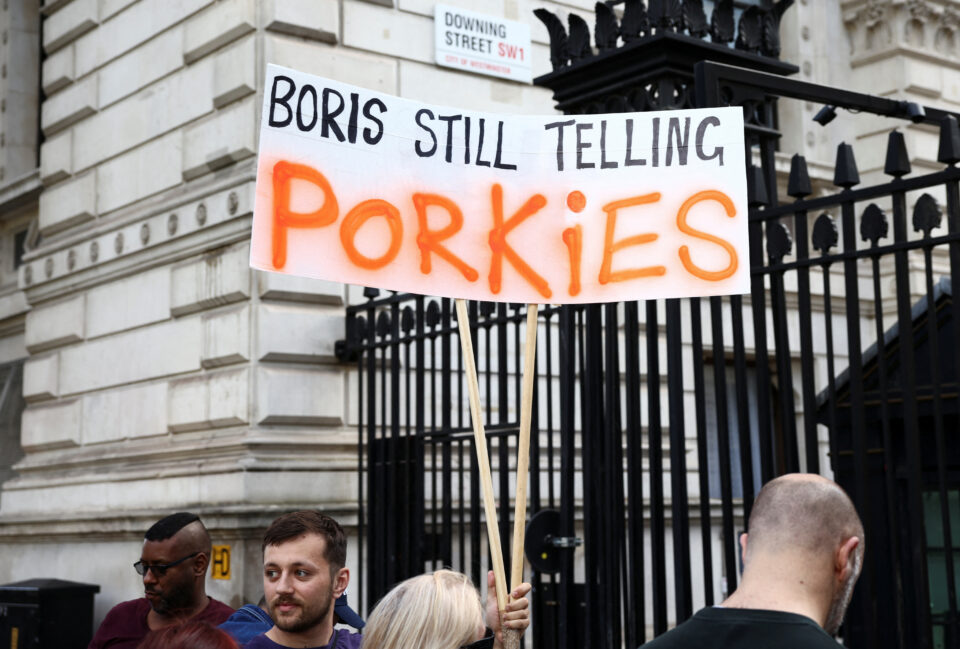 A man holds a sign outside the gate of 10 Downing Street, in London, Britain, July 5, 2022. REUTERS/Henry Nicholls

British Prime Minister Boris Johnson was fighting for his political survival on Tuesday after finance minister Rishi Sunak and another senior minister abruptly resigned over the latest scandal to blight his administration.

Sunak and health minister Sajid Javid sent resignation letters to Johnson within minutes of each other in which both took aim at his ability to run an administration that adhered to standards.

Despite mounting anger among his lawmakers, two people close to Johnson said they expected him to stay and fight as well as appoint a new finance minister shortly.

The resignations came as Johnson was apologising for appointing a lawmaker to a role involved in offering pastoral care, even after being briefed that the politician had been the subject of complaints about sexual misconduct.

So far, they are the only two ministers in the prime minister’s top cabinet team to resign, with other senior figures expressing support for Johnson. Foreign minister Liz Truss, considered a leading contender to replace him if he is forced out, said she was “100% behind the PM”.

Three other lawmakers quit junior government roles while a trade envoy resigned and a vice chairman of the Conservative Party resigned his post on live television.

The resignations come after months of scandals and missteps, with Johnson so far weathering criticism over a damning report into parties at his Downing Street residence and office that broke strict COVID-19 lockdowns and saw him fined by police.

There have been other policy U-turns, an ill-fated defence of another lawmaker who broke lobbying rules and he has also come under fire for not doing enough to tackle a cost-of-living crisis, with many Britons struggling to cope with rising fuel and food prices.

Economists say the country is now heading for a sharp slowdown or possibly a recession. Both Sunak and Javid had previously publicly supported Johnson, but in their letters said enough was enough.

Sunak, who had reportedly clashed with the prime minister in private about spending, said: “For me to step down as Chancellor (of the Exchequer) while the world is suffering the economic consequences of the pandemic, the war in Ukraine and other serious challenges is a decision that I have not taken lightly.”

“The public rightly expect government to be conducted properly, competently and seriously,” he added. “I recognise this may be my last ministerial job, but I believe these standards are worth fighting for and that is why I am resigning.”

Javid said many lawmakers and the public had lost confidence in Johnson’s ability to govern in the national interest.

“It is clear to me that this situation will not change under your leadership – and you have therefore lost my confidence too,” his letter said.

The pound fell on the resignation of Sunak but economists said Johnson’s removal could bring needed stability and offer a boost to sterling and the markets.

The resignations came just minutes after Johnson went on television to apologise for appointing lawmaker Christopher Pincher to a role involved in offering pastoral care in the Conservative Party, his latest public expression of contrition for his mistakes.

“In hindsight, it was the wrong thing to do. I apologise to everyone who’s been badly affected by it,” Johnson told broadcasters. “I just want to make absolutely clear that there’s no place in this government for anybody who is predatory or who abuses their position of power.”

Pincher’s resignation last Thursday triggered days of a changing narrative from Downing Street over what the prime minister knew of the deputy chief whip’s behaviour and when he knew it.

Earlier on Tuesday after a former top official accused Johnson’s office of lying, the prime minister’s spokesman was forced into a quick about-turn to say the British leader had been briefed in “some form” about the case but had forgotten about that last week.

For many in the governing party, another allegation of lying and the explanation of a loss of memory only heightened their frustration with the Johnson administration, which some lawmakers say is paralysed by having to deal with scandals.

Some Conservative lawmakers are trying to renew attempts to unseat him, just a month after the prime minister survived a confidence vote, while others earlier appealed to his cabinet ministers to move against Johnson.

“He’s finished,” said one previously loyal Conservative lawmaker on condition of anonymity. “He shouldn’t prolong the agony. It’s disrespectful to his colleagues, his party and his country.”

Another previously loyal lawmaker agreed: “It is all over. I would be amazed if he lasts until the summer now.”

But some party veterans said Johnson, who according to his closest aides relishes a fight, could stay on, and hope to yet again reset his administration.

Opposition Labour leader Keir Starmer said those who had backed Johnson were complicit in how he had performed his job.

“After all the sleaze, the scandals and the failure, it’s clear that this government is now collapsing,” he said.

Iran says Rushdie and supporters to blame for attack