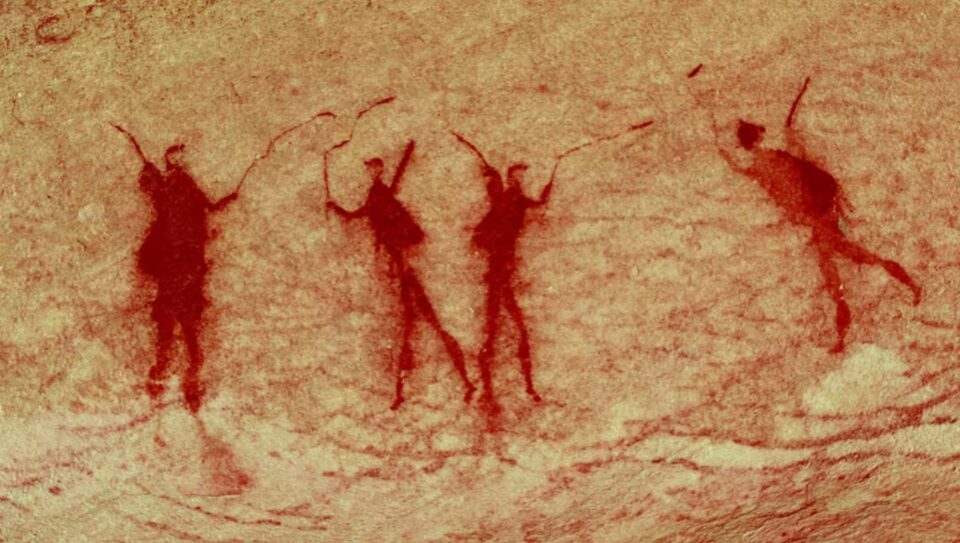 Archaeologists spend a lot of time examining the remains of distant pasts, which includes the study of rock paintings. This is largely visual work – but sometimes we can “hear” the ancient past using acoustic methods.

Our archaeoacoustic research is focused on bringing to life sounds made by people living in the past. No aural record remains but people did dance, sing and clap. Instruments either no longer exist or are extremely rare. One exception are the gong rocks, known as lithophones, which ring when struck and produce purposeful, percussive sounds. Occasionally, unfamiliar and rare musical instruments are depicted in rock paintings.

In a new study we turned our ears to a rock painting in the Cederberg Mountains in South Africa’s Western Cape province. The human figures in this painting have previously been interpreted as healers holding fly-whisks and doing a trance-dance. Fly-whisks were an important accessory for the dance because they were thought to keep arrows of sickness at bay.

But our results suggest that the fly-whisks are in fact musical instruments of a type known as a !goin !goin – a name that only exists in the now extinct ǀXam language that was spoken by hunter-gatherers in central southern Africa. The !goin !goin is an aerophone; these instruments produce sound by creating vibrations in the air when they are spun around their axes.

To reach this conclusion we combined digital image recovery techniques with instruments created from life-size templates based on our findings. The eight instruments were played in a Cape Town sound studio and the sounds were recorded. Sound produced by the recreated instruments convincingly matches the sound spectrum (90 – 150 Hz) produced by a similar 19th century model of the !goin !goin aerophone, which is archived in the Kirby Collection of Musical Instruments, curated by the University of Cape Town’s College of Music.

Our results suggest that !goin !goin type aerophones were used around or before 2000 years ago. This conclusion is based on the age of the image that is painted in the fine-line technique, which is a style of painting that disappeared with the arrival of pastoralists in the southern Africa region 2000 years ago.

The Cederberg painting is one of only four known examples of aerophone playing depicted in rock paintings in the southern Africa region. By contrast many paintings are identified as illustrating fly-whisks. Our findings suggest the need for greater nuance when studying rock paintings. Perhaps some of the fly-whisk depictions should be revisited with a “listening ear”?

The !goin !goin generates a distinct pulsating sound (visualised in the image below) due to the circular rotation of the player’s arm and the twisting and untwisting of the cord that attaches the rotating blade to the stick.

An unexpected finding was the compositional possibilities offered when two or more !goin !goin were played at the same time. Speeding up and slowing down the rotation subtly changes the sound. Two instruments, one played fast and the other slow, creates a composition. Playing in sync and out of sync adds another layer of musical creation.

It was not possible to play eight instruments in the sound studio at one time. An eight-instrument performance requires more space than the studio could provide. But a sound recording of three !goin !goin playing together suggests what group music-making with the !goin !goin may have sounded like.

This compositional aspect of the instrument was not well known at all so we delved deeper. In the Special Collections archive at the University of Cape Town we found an obscure description of the !goin !goin which confirmed, as does the Cederberg painting, that groups did play the instruments together.

What of the trance healing dance suggested by earlier interpretations of the Cederberg painting? It is well known that all senses, not just vision, hallucinate in trance and that the aural hallucination of buzzing is construed as the sound of bees, rushing wind or falling water. So the painting does link to trance because of the association with bees and buzzing – but the items depicted in the painting are musical instruments, not fly-whisks.