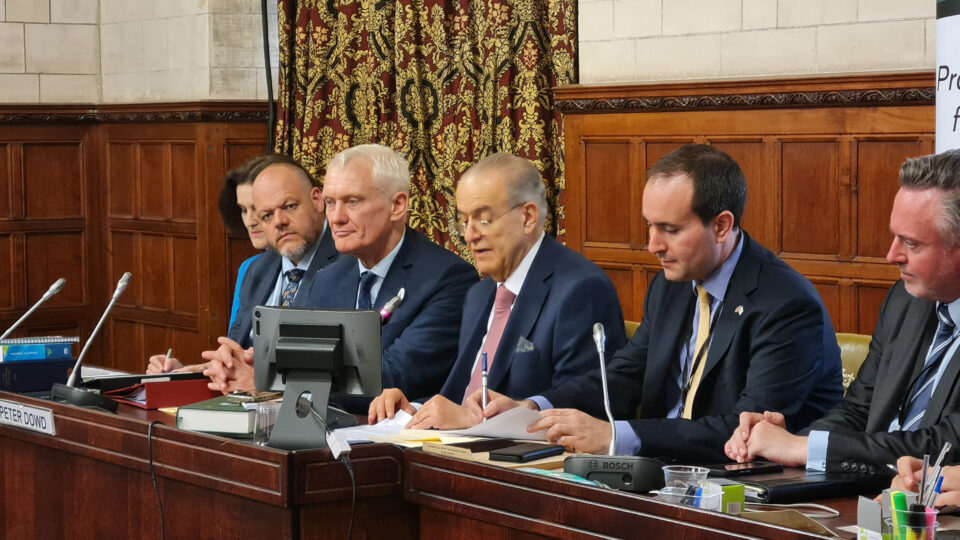 The UK government’s new Minister for Europe Graham Stuart has reaffirmed London’s support for a settlement to the Cyprus issue based on the agreed basis of a bizonal, bicommunal federation.

He was speaking at an event in the Houses of Parliament in Westminster on Wednesday evening, in which Ioannis Kasoulides, the Cypriot Foreign Minister, was the keynote speaker.

Kasoulides said that the Cyprus problem is at a “critical juncture”, with the Turkish Cypriot leadership rejecting the Cypriot government’s “bold” confidence building measures proposals.

He added that Nicosia “has repeatedly expressed its commitment for a swift resumption of talks” and that it aims for a solution “the soonest possible” and “through negotiations, on the basis and in accordance with the relevant resolution if the UN Security Council and in the framework of the Good Offices of the Secretary General of the UN.”

He said the agreed framework of a bizonal, bicommunal federation is “undermined” by Ankara and the Turkish Cypriot leadership, which he criticised for focusing on “upending” the process and insisting on “unacceptable preconditions for the resumption of talks.”

Referring to the UK’s role, he commented: “You may enjoy excellent bilateral and trade relations with Turkey but, importantly, maintain a strong stance upholding values and principles when it comes to the Cyprus problem.”

Minister Stuart assured the UK Cypriots that attended the event of the UK’s support for a “comprehensive, just and lasting” settlement of the Cyprus issue. “We believe the way to address many of the long-term issues remains through a settlement within the UN parameters,” he noted.

“We’ve been clear that is should be based on the existing lines of a bizonal, bicommunal federation with political equality. We believe that these parameters are broad enough and flexible to accommodate the interest of both the Greek Cypriot and the Turkish Cypriot communities,” elaborated the recently appointed UK Minister for Europe.

He pledged on behalf of the UK government to “press on” with all involved parties to find solutions and he pointed to “major economic opportunities” that the reunification of Cyprus would bring about.

He ended his speech by saying: “I also want to be clear that the UK will oppose strongly any destabilising actions either in Cyprus or in the wider eastern Mediterranean, and we actively support Security Council resolutions covering Varosha. We’ve called for Turkey’s actions to cease and be reversed. But it’s of course for all parties to ensure that tensions do not spiral.”

Kasoulides also hailed the “special relationship” between the two countries, referencing the MoU on bilateral cooperation that the two governments prepare to sign. He noted the quick reaction by Cyprus to Russia’s invasion of Ukraine, and highlighted the regional synergies developed by Cyprus, proving that it is a “credible, reliable, predictable” partner, contrary to Turkey, which he described as “a regional bully”.

The event was organised by the National Federation of Cypriots in the UK and the All-Party Parliamentary Group on Cyprus, with many British MPs from all parties in attendance.

The Federation’s President Christos Karaolis said in his introductory remarks that Russia’s illegal invasion of Ukraine earlier has brought back painful memories for Cypriots, especially in the run-up to July 20th, which marks 48 years since Turkey’s illegal invasion and continued occupation of the northern third of the Republic of Cyprus.

He added that Cyprus continues to have to deal with “an increasingly intransigent and provocative” Turkey.

Karaolis also noted that through the Federation UK Cypriots have contacted their respective constituency’s representative in the Commons asking them to stand up for a united Cyprus, reaching over 60 per cent of British MPs, 396 of them. He then referred to the UK’s historic treaty obligations towards Cyprus.

Many of the MPs attending the event took to the floor to pledge their continuing support for the reunification of Cyprus, namely Alyn Smith, Caroline Nokes, Mike Wood, Fabian Hamilton, Theresa Villiers, Bambos Charalambous and Geraint Davies.

Kiosk worker remanded after over €40,000 of products stolen (updated)