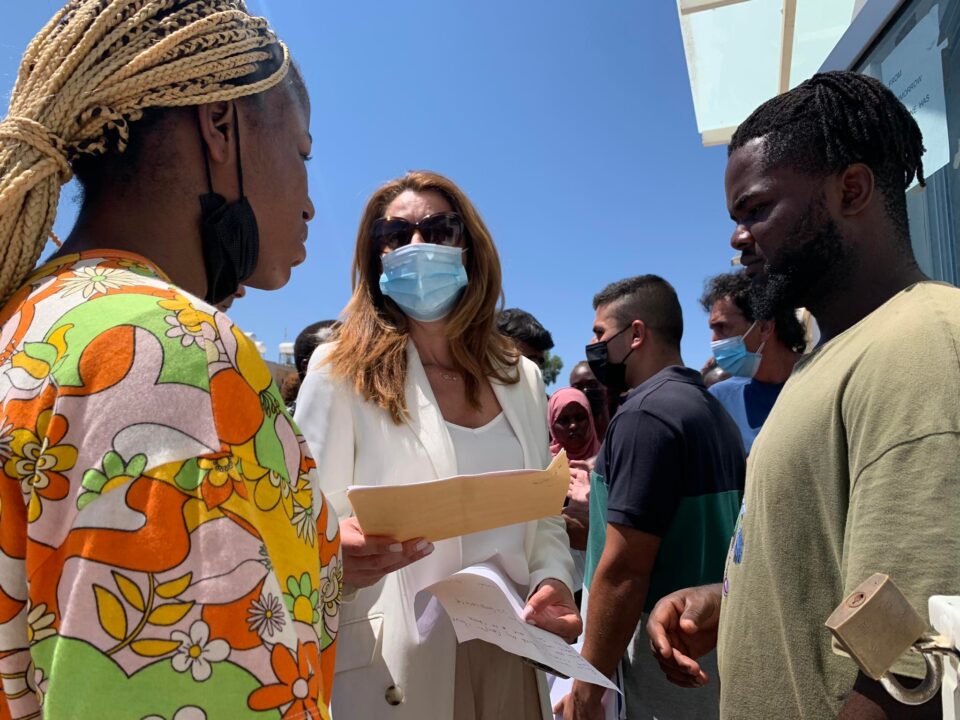 Improvements, which will reduce the burden on the Lakatamia welfare office that assists asylum seekers, were under way, the deputy minister of social welfare Anastasia Anthousi said on Monday.

There had been mounting criticism of the government by Lakatamia residents with the mayor, Photoulla Hadjpapa saying she would take legal action against the state.

Anthousi acknowledged residents’ complaints that the situation has become unacceptable. There is a police presence in the area to restore order when there are disturbances, which are frequent.

The deputy minister cautioned, however, that shady dealings and exploitation further complicated matters. She said there were allegations of asylum seekers declaring false places of residence to be released from the Pournara reception centre. There were also allegations that some ‘groups’ were using asylum seekers for benefits fraud.

She spoke to journalists outside the offices, after an on-the-spot visit, with policemen and patrol cars nearby. She said that as of Tuesday more of the bureaucracy and paperwork will be carried out on location at the Pournara camp.

That overhaul would see welfare department staff transferred to Pournara to handle requests on site – so that applications could be registered there directly.

“According to my information, many people here [in Lakatamia] are submitting their application,” she explained.

Anthousi added that some steps in the application process had become digitalised and simplified, removing some requirements for the asylum seekers entirely. This would cut the number of required visits to the offices. One such change was that an asylum seeker’s registration with the ministry would now be checked digitally by other departments and offices. Therefore, the social services worker will have access to the ministry’s information, removing the need for the applicant to prove that the registration process had been carried out.

“Certainly, I can’t promise that everything will be solved overnight – I can’t guarantee the Lakatamia residents that from tomorrow they won’t see such scenes again, but what I want to verify is that I am personally overseeing [these changes],” Anthousi told reporters.

But the main request from Lakatamia residents – that the offices which handle asylum requests be moved out of their area entirely – was under consideration, as the deputy ministry was looking for new premises, Anthousi said.

One main hurdle in the overall process, the deputy minister pointed to, was that of the addresses being declared by the asylum seekers, a requirement for their released from Pournara.

“They give an address, but when we ask them to provide proof of their lease agreement, they tell us that there are no homes available?” Anthousi said.

“By just releasing people [from Pournara] because they’ve declared an address but then it turns out that this address does not exist, that’s an issue that will also have to be investigated – because someone will have given them that address,” Anthousi explained.

Asked by a reporter as to whether there may be some people who are using asylum seekers to secure their welfare benefits under false pretenses, Anthousi said that all residences are first confirmed and inspected prior to payments being sent out.

“There have been cases where residences were checked and the applicant was not identified as being there, so the payments were suspended – perhaps that’s why some people are here, seeking explanations,” she said.

Anthousi said there were unofficial reports of people charging asylum seekers €50 prior to them being able to declare their place of residence.

The row over the Lakatamia offices has been rumbling on for years but boiled over last week as mayor Fotoula Hadjipapa announced that she is taking legal action.

In the letter made public, Hadjipapa said that the conditions created in the surrounding neighbourhood due to the loitering of applicants posed a physical as well as a mental health threat to its residents.

The mayor added that this was a tense situation which could get out of control and would have consequences for the authorities that bear full responsibility for what is happening.

Ibrahimovic to play on past 41 after extending Milan contract