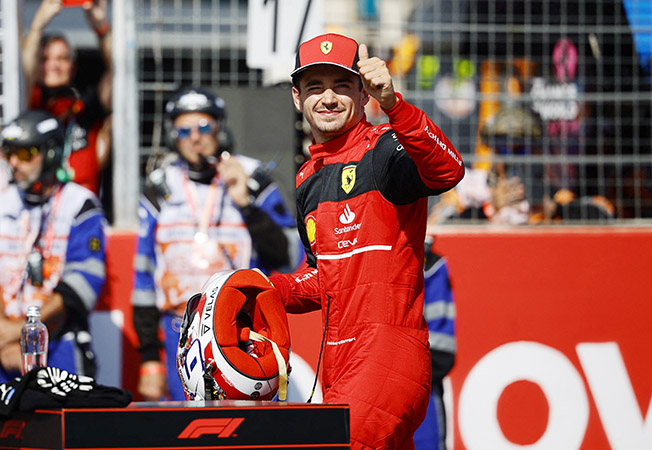 Lewis Hamilton will start his 300th Formula One race from fourth on the grid after Charles Leclerc secured pole position at the French Grand Prix.

Leclerc breathed fresh life into his championship bid with a comprehensive victory at the last round in Austria a fortnight ago.

And the Monegasque will be in prime position to secure another much-needed win in his title fight against Red Bull’s Max Verstappen.

McLaren have brought more upgrades to France than at any other stage of the season, and Lando Norris split the Mercedes drivers to qualify fifth, one place ahead of George Russell.

Hamilton’s Mercedes team harboured high hopes for the 12th round of the campaign here in the scorching south of France heat.

A new floor, coupled with the smooth Circuit Paul Ricard asphalt, even led some within Mercedes to believe Hamilton could end both his, and the team’s, barren run by securing his 104th triumph in his landmark race.

But the Silver Arrows have lost further ground to Ferrari and Red Bull with Hamilton nine tenths adrift. Russell was 1.2 sec slower than Leclerc.

Mercedes team principal Toto Wolff, who was joined by Dieter Zetsche – the former chairman of Mercedes’ parent company Daimler – at the back of the team’s garage, cut a largely disconsolate figure.

Wolff has overseen Mercedes’ record-breaking run of eight consecutive constructors’ championships – but as the sport approaches its traditional summer break, the once all-conquering team are no closer to unlocking the speed to allow them to compete with Ferrari and Red Bull.

Leclerc heads into Sunday’s race 38 points behind Verstappen, and with Carlos Sainz already due to start last for changing the engine which caught fire so spectacularly in Austria, Ferrari used the Spaniard as a tow to pull Leclerc along. It worked to tremendous effect with Leclerc roaring to front spot.

After taking his 16th career pole and seventh of the season, Leclerc said: “It was a great lap. I have struggled all weekend to put a lap together but I managed to do it.

“I also had the help of Carlos and that was amazing team work, because without him it would have been much more close so a huge thanks to him and I hope he can get into the fight.

“The car feels good but let’s see how it goes tomorrow.”

Verstappen was quickest in final practice but could not match Leclerc’s speed in qualifying.

“Third practice is clearly not qualifying, but overall we were lacking general grip,” he said.

“It was trickier than I hoped but overall we have a decent race car. We will be quick on the straights, so hopefully we can use that tomorrow.”