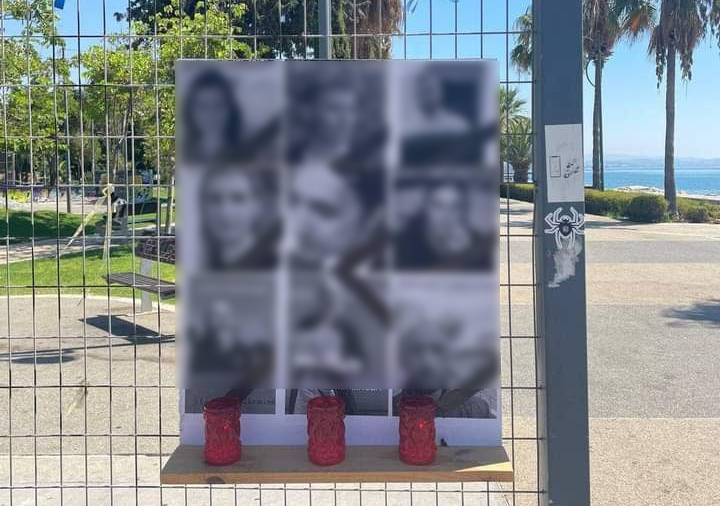 The poster depicting Russian activists opposing the war on the Molos embankment. The photo has been blurred to protect privacy

Russian opponents of Moscow’s war in Ukraine who live in Cyprus say they are being targeted by Russian propaganda to the point of veiled death threats but Cypriot authorities are taking no action.

In emails to the Cyprus Mail, some Russian residents in Limassol say they are being intimidated due to their opposition to the actions of Russian President Vladimir Putin.

The Mail was informed that on Saturday morning, unidentified people hung posters depicting Russian activists living in Cyprus who actively oppose Russia’s war in Ukraine and the Putin regime.

The posters were hung in Limassol, on the Molos embankment; the activists’ names were stipulated in Russian.

“This ‘installation’ imitates funeral photographs with mourning ribbons and candles, which are usually lit in memory of the deceased people,” the email said.

“Several people whose photographs were posted on Molos have already filed a death threat complaint with the police,” it added.

It said that according to the activists themselves, the Cypriot representatives of the organisation Rossotrudnichestvo, which is under EU sanctions, with the support of the Russian embassy in Cyprus could be behind the actions.

In social media comments, one of the people whose photo was posted, Mikhail Savostin, said: “I perceive such an action as a life threat for each of us. I won’t be surprised if something happens to me…”

Another person whose photo was published, Natalya Boyko, said: “Russian propaganda does not have enough space in its own country, it spreads out of all cracks and has also reached Cyprus. In the city of Limassol, on the most crowded street, a mourning banner was installed with photographs of living people, where mine is also”.

The email also referred to a pro-Russian poster photo exhibition ‘The Candle of Memory’ which was launched in the municipal park in Limassol on July 27, which had been criticised by the embassy of Ukraine in Cyprus as well as anti-war citizens of Ukraine and Russia.

A second email from anti-war Russian residents pointed to the Coordinating Council of Russian Compatriots aka. KSORS, which organises flashmobs and motorcycle convoys

“The Cypriot national police and municipal authorities usually turn the blind eye to these escapades,” the email said.

It then referred to the photos that were put up on Saturday, saying the pro-Russia activists had crossed a red line.

“Apart from the obvious violation of the EU legislation on personal information distribution, this may well be interpreted as personal threats by (unidentified) group of people,” it added.

“Knowing the Putin’s regime reputation very well, these threats must be taken extremely seriously, which means that these people are in danger for their political views. This poses direct threat to the fundamental European liberties: freedom of speech, freedom of political views, freedom of opinion”.

KSORS, it said was a notorious organisation which had spread branches in multiple countries around the world, claiming to protect the interests of Russian compatriots “while the only interests they protect are those of the Putin’s clique”.

Arrest after knife attack in Paphos