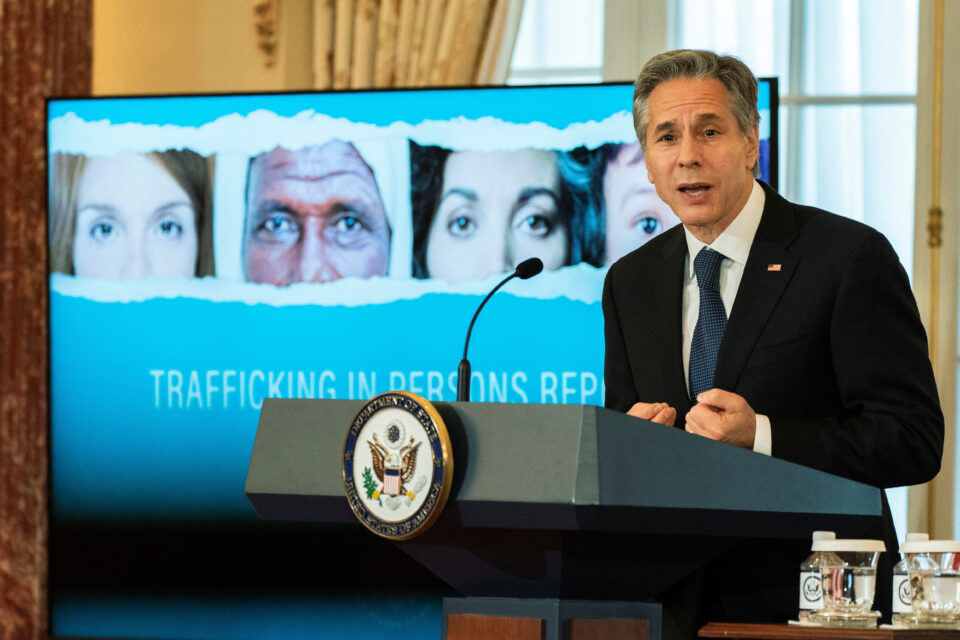 US Secretary of State Antony Blinken speaks during the 2022 Trafficking in Persons (TIP) Report launch ceremony at the State Department, in Washington DC

According to the latest Global Slavery index (2018) over 40 million men, women or children, are current victims of modern slavery with women and girls being disproportionately vulnerable, accounting for 71 per cent of all victims.

The Cyprus justice ministry welcomed the upgrading of Cyprus by the US State Department in its annual report on human trafficking. Specifically, Cyprus was upgraded to Tier 1 in this year’s report with the note that the Republic’s government fully meets the minimum standards for the elimination of trafficking.

Cyprus has been classified as a destination country for victims of trafficking, mainly for sexual and labour exploitation. Human trafficking victims are modern-day slaves because they are forced to engage in commercial sex acts or solicit services against their will. Force, fraud, or coercion need not be present if the individual engaging in commercial sex is under 18 years of age. Of course, there are other forms of trafficking, such as trafficking for begging, street prostitution, organ removal and marriages of convenience.

Still Cyprus’ political conflict is providing ample ground for human traffickers with cases at “alarming” levels in the occupied north part of the island. In addition, there are ongoing criminal activities of smuggling and trafficking persons across the UN-controlled buffer zone, also known as ‘Green Line’.

In any case, in recent years the country has taken some positive steps to improve its legislation and policies to combat trafficking. In 2016 a National Referral Mechanism for the identification and referral to assistance of victims of trafficking was established, while in 2019 the anti-trafficking legislation was amended to increase significantly the penalties for human trafficking and criminalising the use of sexual services of victims of trafficking. Another positive step was the setting up of the Children’s House in Nicosia, which makes it possible to limit the number of interviews of child sexual abuse victims.

By understanding this diverse and complex crime and learning more about the types of trafficking people we will be able to pay attention to what is going on around them and help in identifying a potential trafficking situation and thus provide information to the relevant authorities. Traffickers recognise and exploit people who are vulnerable, for example, people with an unstable living situation, people who are victims of sexual abuse or domestic violence, undocumented immigrants, young runaways and drug addicts. As for the traffickers, these might be anyone. People recognising Labor Trafficking and Sex Trafficking should immediately contact the authorities.

Regarding modern slavery, such a crime requires a united, global response. Governments are already significantly behind in their commitment to eradicate modern slavery and achieve UN Sustainable Development Goal 8.7 by 2030.

Again according to the Global Index not enough countries show a strong response to taking action. For example, the top five consumer products at risk of modern slavery are laptops, computers and mobile phones, fish, cocoa, clothes and sugarcane. How many countries have introduced supply chain transparency laws?

In the EU the voluntary approach towards this problem is not enough particularly with the coronavirus crisis having had a profoundly disturbing effect on global chains. Bearing this in mind the European Commission presented its proposal for a law on corporate sustainability obligations – the EU Supply Chain Law. Under this law companies are obliged to comply with the entire value chain within their own business sector.

Going far beyond existing legislation at national level it will cover key violations. This is mostly needed since in most cases, national law has a focus on specific human rights violations such as in the Netherlands where the law targets child labour and in the UK where the target is modern slavery. Only the French 2017 law has a cross-sectoral approach on the duty of vigilance thus placing far reaching requirements. The EU Supply Chain Law will target: forced labour, child labour, inadequate health and safety at work, worker exploitation and environmental violations such as greenhouse gas emissions, pollution or the destruction of biodiversity or ecosystems

The proposal for the EU Supply Chain Law will go to the European Parliament and the Council for approval. An intense debate is expected in the Parliament before the supply chain law is finally passed most likely in 2023.

Cyprus seeks ‘actions and proposals’ on resumption of talks