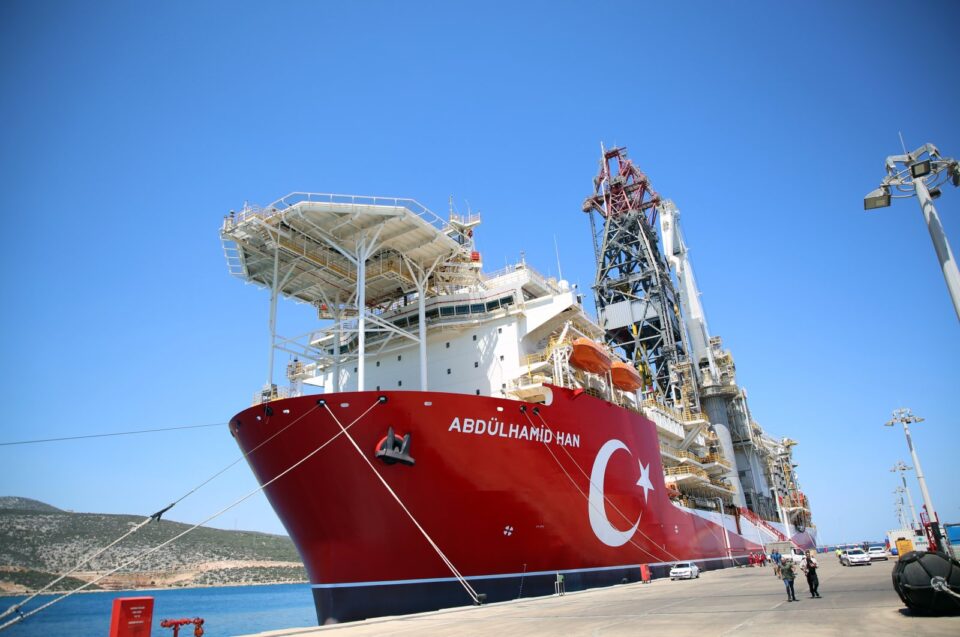 Turkey’s newest drillship has set sail, with destination unknown, a week earlier than previously intimated by the Turkish government.

The Abdulhamid Han (ex Cobalt Explorer) is a seventh-generation ultra deepwater drillship owned and operated by the Turkish Petroleum Corporation. She is Turkey’s fourth drillship.

As the three other drillships of the state-owned Turkish gas company (Fatih, Yavuz and Kanuni), the Abdulhamid Han is named after sultans of the Ottoman Empire.

The ship has departed the Turkish port of Mersin. Heading west, on Monday afternoon it was located between the Turkish coast and the north of Cyprus – but much closer to Turkish shores.

Turkey has billed its latest acquisition as asserting its rights in the eastern Mediterranean, while Cyprus and Greece see the move as one escalating tensions. Relations between Athens and Ankara are strained over a raft of issues ranging from overflights to disputed waters and competing claims over offshore waters believed to contain large quantities of natural gas.

In a statement on Monday, the nationalist party Elam in Cyprus blasted the government for what it called an ineffectual foreign policy.

Elam went on to ask what actions, if anything, the foreign ministry had taken.

“Given that the Turkish moves were clear for a while, we wonder what the foreign ministry was waiting for before reacting. Or is this another case of ‘we won’t sanction for the sake of sanctions’ as [Nicos] Christodoulides put it, or ‘what do you want me to do’ as [Ioannis] Kasoulides said?”

The party were alluding to the former and current foreign ministers.

Meanwhile media in Turkey reported on the drillship’s doings with a certain amount of schadenfreude.

Turkish daily Hurriyet recalled that the country’s energy minister had stated the drillship would start operating in the eastern Mediterranean on August 9. Now, the ship’s earlier departure has caused Nicosia and Athens to panic, the paper commented.

It also quoted Turkish Cypriot leader Ersin Tatar taking pleasure from the fact Turkey was keeping both Cyprus and Greece guessing about the vessel’s destination.

‘The TRNC celebrates these three historic events, which coincide on the same day, as a Day of Social Resistance. Let them [Greeks] wonder where the Abdulhamid Han will drill, they will soon find out. The Abdulhamid Han has taken a step, they are on pins and needles. Let this be our holiday gift to them.”

Other media commented that this is less a research project and more a part of Turkey’s strategy to dispute Cyprus’ and Greece’s delineated continental shelves and exclusive economic zones.

But Turkey may not ratchet up the pressure to levels seen in the Aegean in the summer of 2020, as United States officials have warned it to keep tensions under control.

At the Nato summit in Madrid in June, US President Joe Biden warned Turkish leader Tayyip Erdogan to “maintain stability in the Aegean”.

Meantime Turkey has issued a new Navtex, naval alert, for various military exercises off Cyprus. The Navtex concerns exercises by the Turkish navy using live fire, off the Karpas peninsula between August 15 to September 29.