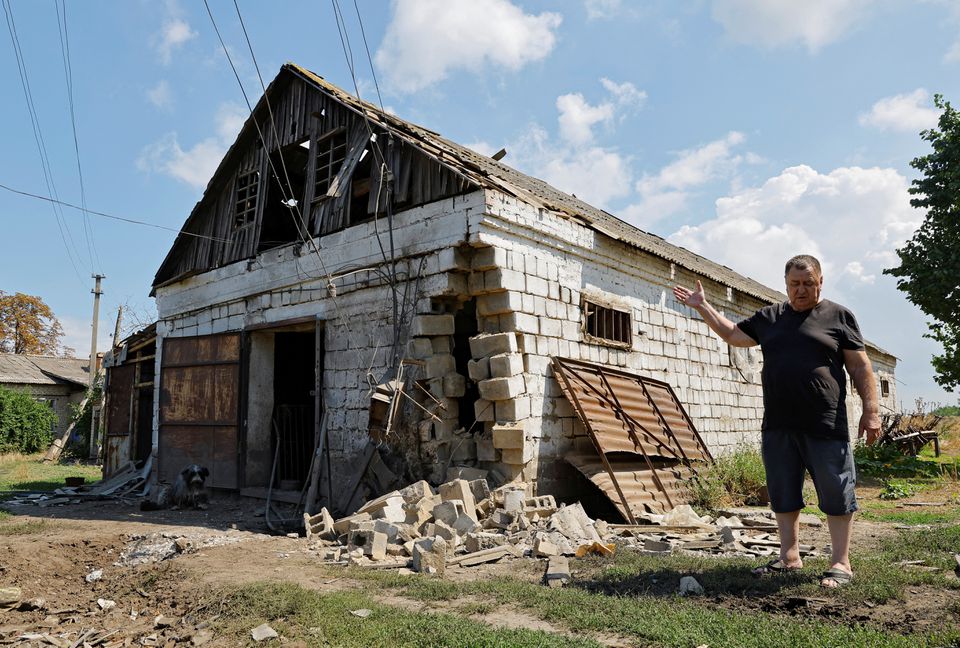 Shelling hit a high-voltage power line on Friday at a Ukrainian nuclear power plant captured by Russia, but Ukrainian authorities said the plant still worked and no radioactive leak had been detected.

Earlier, the Russian-installed administration of the occupied Ukrainian city of Enerhodar said Ukrainian shells struck the lines at the plant, in the country’s southeast

The Interfax news agency cited the city administration as saying fire had broken out on the plant’s premises, and that power necessary for the safe functioning of reactors had been cut off. The plant was captured by Russian forces in early March in the opening stage of the war.

Energoatom said the plant – located about 200 km (160 miles) northwest of the Russian-held port of Mariupol – still worked and no radioactive discharges had been detected.

Further east, both sides claimed small advances while Russian artillery bombarded towns and villages across a wide area in a now-familiar tactic.

Fighting on the ground appeared to be most intense around Pisky in Donetsk region, a fortified village held by Ukrainian troops and close to Donetsk city, which is in the hands of Russian-backed separatist forces.

The Russians also have the cities of Bakhmut and Avdiivka in their sights as they try to gain full control of the eastern Donbas area, Ukraine’s industrial heartland.

In other developments, three grain ships left Ukrainian ports on Friday and the first inbound cargo vessel since the Russian invasion was due in Ukraine to load, marking further steps in the Kyiv government’s efforts to resuscitate its economy after five months of war.

Russian President Vladmir Putin meanwhile was meeting Turkish President President Tayyip Erdogan, who is cultivating a role as a mediator in the war, in the Russian city of Sochi.

“The international community cannot end the war in Ukraine by ignoring Russia,” said Fahrettin Altun, a top aide to Erdogan.

Turkey helped negotiate the agreement that on Monday saw the first grain ship leave a Ukrainian port for foreign markets since the Russian invasion on Feb. 24.

On Friday, two grain ships set off from Chornomorsk and one from Odesa carrying a total of about 58,000 tonnes of corn, the Turkish defence ministry said.

The Turkish bulk carrier Osprey S, flying the flag of Liberia, was expected to arrive in Chornomorsk on Friday to load up with grain, the Odesa regional administration said.

Russia and Ukraine normally produce about one third of the world’s wheat, and the United Nations had warned that the halt in grain shipments through the Russian-dominated Black Sea could lead to famine in other countries, particularly in Africa, Asia and the Middle East.

“We expect that the security guarantees of our partners from the U.N. and Turkey will continue to work, and food exports from our ports will become stable and predictable for all market participants,” Ukrainian Infrastructure Minister Oleksandr Kubrakov after the three ships set off on Friday.

Ukrainian Deputy Economy Minister Taras Kachka said he hoped the deal would be extended to other commodities such as iron ore.

Ukraine’s Seaport Authority said on Monday 68 ships were berthed in Ukrainian ports with 1.2 million tonnes of cargo on board, two thirds of it food.

Since Russian troops poured over the border in February in what Putin termed a “special military operation”, the conflict has settled into a war of attrition fought largely in the east and south of Ukraine.

But Ukrainian presidential adviser Oleksiy Arestovych said: “There is very little evidence of any movement here. They (the Russians) made an attempt to advance but it was unsuccessful.”

Ukraine has turned the village into a stronghold, seeing it as a buffer against Russian-backed forces holding Donetsk city about 10 km to the southeast.

Tass also said fighting was taking place in the city of Bakhmut, north of Donetsk and Russia’s next main target.

“Russian forces may be advancing a few hundred metres a day. They are trying to encircle our forces,” Arestovych said.

Arestovych also said Ukrainian forces had recaptured two villages near Izyum in Kharkiv region, which borders Russia, and were advancing on a third.

“This means Ukraine is on the offensive. It may not be a very big offensive. But it is an offensive nonetheless, he said.

Reuters could not verify either side’s assertions about battlefield developments.

To the strategically-important south, where Ukraine has been planning a counteroffensive to win back swathes of occupied land, Russia has been building up forces, Kyiv says.

Russian troops may try to wrest momentum back from Kyiv by launching an offensive in the south after weeks of Ukraine using Western-supplied long-range weapons to hit Russian supply lines and ammunitions dumps.

The war has displaced millions, killed thousands of civilians and left cities, towns and villages in ruins. Ukraine and its Western allies have accused Russian forces of targeting civilians and war crimes, charges Russia rejects.

Putin says he wants to ensure Russian security and protect Russian-speakers in Ukraine. Kyiv accuses Moscow of an imperial-style war to retake a pro-Western neighbour that shook off Russian domination when the Soviet Union broke up in 1991.

Western countries and allies have piled financial restrictions on Russia since Feb. 24. Moscow retaliated with obstacles for Western businesses and their allies leaving Russia, and in some cases seized their assets.

In the latest move in the sanctions war, Russia on Friday banned investors from so-called unfriendly countries from selling shares in key energy projects and banks until the end of the year.