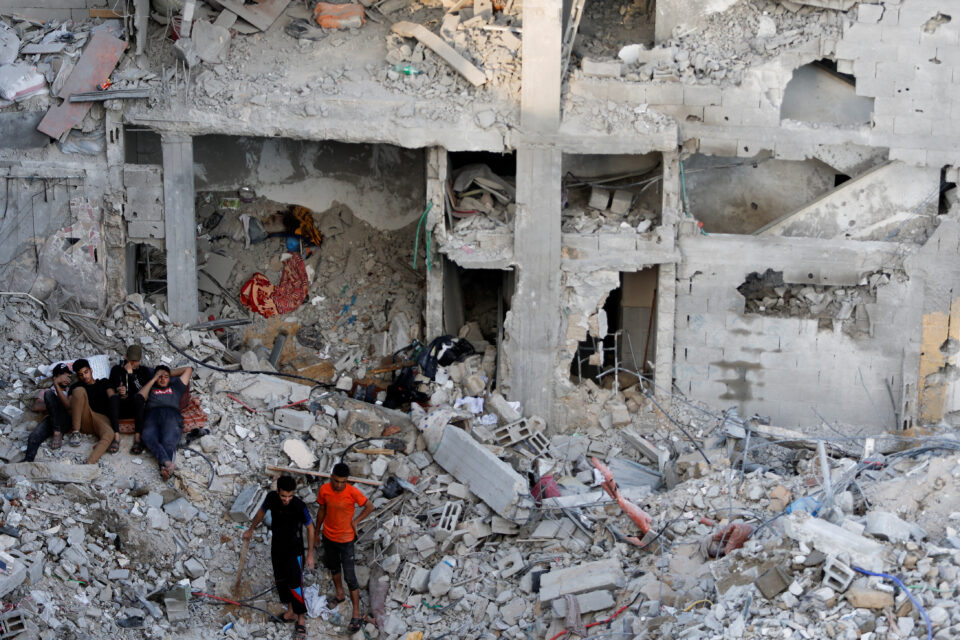 Palestinians gather at the scene where senior commander of Islamic Jihad militant group Khaled Mansour was killed in Israeli strikes, in Rafah

Palestinian militants fired rockets toward Jerusalem on Sunday, causing no casualties but signalling new reach and resolve as Israel pressed air strikes in the Gaza Strip and admitted Jewish visitors to a contested mosque compound.

The Islamic Jihad faction said it targeted Jerusalem in retaliation for Israel’s killing overnight of Khaled Mansour, its commander in southern Gaza. “The blood of the martyrs will not be wasted,” it said.

About 30 Palestinians, at least a third of them civilians, have been killed in Gaza fighting that erupted on Friday, while rocket salvoes have paralysed much of southern Israel and sent residents in cities like Tel Aviv and Ashkelon to shelters.

Casualties on the Israeli side have been prevented by the Iron Dome antimissile system, which an army spokesman said had a 97% success rate in shooting down rockets.

The flare-up has worried world powers and prompted ceasefire mediation by Egypt. But it has been contained by the fact that Hamas, the governing Islamist group in the impoverished and blockaded Gaza Strip since 2007, has held fire.

Palestinians dazed by another surge of bloodshed – after outbreaks of war in 2008-09, 2012, 2014 and last year – picked through the ruins of houses to salvage furniture or documents.

“Who wants a war? No one. But we also don’t like to keep silent when women, children and leaders are killed,” said a Gaza taxi driver who identified himself only as Abu Mohammad.

Israel said it would stop shooting if Islamic Jihad did. “Quiet will be answered with quiet,” a military spokesman said.

The booms of mid-air rocket interceptions over towns some 5 km (2 miles) west of Jerusalem could be heard in the city as Jews fasted in an annual commemoration of two ancient temples.

The site where those shrines once stood is now the Al Aqsa mosque compound, Islam’s third holiest site and an icon of Palestinian nationalism, in Jerusalem’s walled Old City.

Scores of Jews toured the compound under police guard on Sunday. The scheduled visits are an affront to Palestinians.

Video circulated online showed some Jews trying to pray in defiance of Israeli regulations, as police moved in to stop them and Muslim worshippersshouted in protest. Confrontations at the site helped spark a May 2021 war between Israel and Hamas. Read full story

Israel launched Friday’s strikes in what it described as the pre-emption of an Islamic Jihad attack meant to avenge the arrest of a group leader in the occupied West Bank. Arrest sweeps against the group have continued in that territory.

The hundreds of rockets fired by Islamic Jihad in response are the reason for the continuing operation, according to Israeli Justice Minister Gideon Saar, a member of the decision-making security cabinet.

Asked on Israel’s Army Radio whether an end might be close, he said: “I hope so, but I don’t want to pin excessive hopes on that. To the extent that Islamic Jihad wants to protract this operation, it will regret it.”