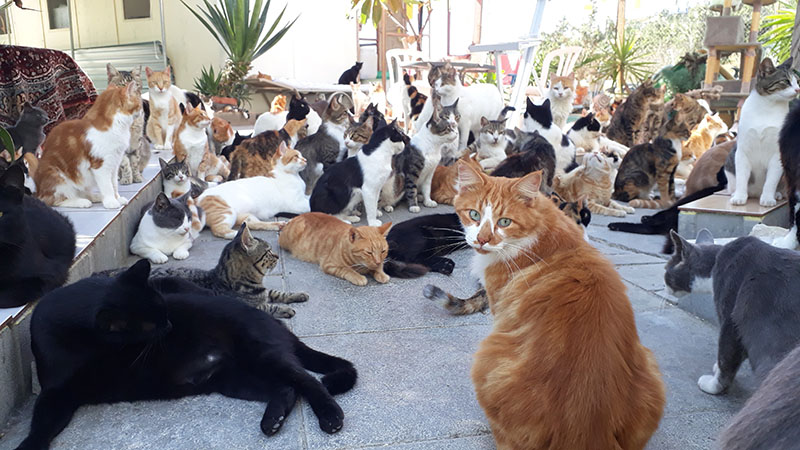 There’s a story that suggests Cyprus was once cat-free. Until, that is, in the 1300s Saint Helen of Constantinople shipped over a boatload of furry felines from Egypt to combat a local snake infestation. But the tale is simply not true. Cats in Cyprus go back much further than that; in fact, the earliest evidence of feline domestication in the entire world was found right here!

Just a few years ago, a cat grave dating back to 7,500 BC was unearthed in the Neolithic village of Shillourokambos (near what is today Parekklisia). Containing the lovingly interred remains of a human and cat, the grave proved that felines existed on the island long before anyone suspected. But it also showed us just how much cats were esteemed in Cyprus – over four millennia before the ancient Egyptians began to revere their catty companions (often shaving off their eyebrows in mourning when the family pet met its maker!).

Humans have long had a loving relationship with cats. Today, they’re the world’s favourite pet, outnumbering their canine counterparts by three to one. But they’re also the most frequent stray – in Cyprus alone, it’s believed there are 200,000 stray dogs, but 2 million stray cats. It’s a number that’s constantly increasing.

One of the best-known sanctuaries in Cyprus, Tala Cat Park homes 850 cats at the moment. “But that’s just a drop in the ocean,” says Mark Foote who, along with wife Dawn, founded the Paphos sanctuary roughly a decade ago. Today, the couple have rehomed over 1,500 cats in total – mostly in Cyprus, but many to the UK, Germany and Holland – and have neutered thousands more.

“And that’s really the answer to the stray issue,” says Mark. “Cats can produce a litter up to three times a year, so neutering – removing a female cat’s reproductive bits – is crucial. As is spaying, the process that stops tom cats from reproducing. But both are expensive.”

Tala Cats heads a Trap Neuter Return programme in the Paphos area that neuters stray cats, and then returns them to the area in which they were found. “We were left a legacy, which went straight to our vet for exactly this purpose,” explains Mark. “So if people contact us about neutering local strays, we can direct them to a vet whose fees are paid – the process will be free.”

But with reproduction rates what they are, and even long-time cat-owners dumping unwanted litters in the wild – “you’ll see boxes of kittens just left by the side of the road, or dumped at the nearest public building,” Mark laments – the cat sanctuaries of Cyprus are fighting an uphill battle.

“Colonies of cats appear wherever there’s food,” says Mark. “So almost every hotel, restaurant and bar has its own cluster of ferals. But, if you’re going to feed wild cats, you’re also accountable for their wellbeing: feed a colony, and you should be taking responsibility for their health, and that includes spaying and neutering.” 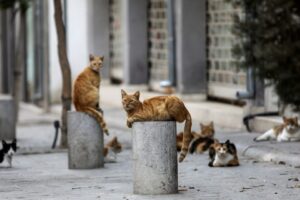 Cats who have been neutered often have a clip in the ear (a process that doesn’t hurt in the slightest). Both of the Cyprus Mail’s office felines have had the snip (ear and nether regions), and are much happier and healthier as a result. And, like most cats, they’ve also brought huge amounts of happiness…

“When we found Covid, who came to us at the start of the pandemic, she was a skinny little ginger scrap,” says the paper’s Environmental Editor, an inveterate cat-lover. The Mail paid for Covid to be neutered and have a health check – “she was riddled with worms and covered in fleas, poor thing,” but has since become a wonderful office companion.

“During the grim days of the pandemic, our feline Covid was a boon – always willing to sit on your lap and soothe you with her purr,” smiles Lara.

She has since been joined by Tuxedo. “Having a cat or two around definitely helps with stress.”

During the pandemic, pet adoption soared; in the US, statistics suggest that as many as 1 in 5 people adopted a cat or dog between 2020 and 2021. For many young families, that meant taking in a bouncy puppy to help while away the downtime. But those thrust into remote work for the first time, deprived of social interaction but still putting in long hours, found a cat to be the perfect companion.

Cats are fairly independent. They’re pretty much self-cleaning, and far less expensive than dogs in terms of food and vet’s bills. They’ve also been proven to lower stress and anxiety (purring can demonstrably calm the human nervous system and lower blood pressure), and are great at reducing feelings of loneliness and depression (I speak from experience when I say watching a kitten wrestle a tennis ball into submission will always bring a smile!).

It’s a shame cats often get a bad rep. Other than Garfield and Puss in Boots, cats are mostly portrayed in books and film as sidekicks for evil masterminds: think James Bond villain Ernst Blofeld and his Turkish Angora Oliver; Vito Corleone’s tabby, Cannoli; and Dolores Umbridge’s Persian patronus. Dogs may be man’s best friend, but cats – in my humble opinion – make the ideal companion. After a hard day’s work my own little rescue, Mist (full name: Mist, Menacer of Mechanical Mice, Destroyer of Countless Carpets, Slayer of Feathery Ferns), is an absolute delight. Nothing does me more good than watching her chase butterflies through the lavender before settling down for a good snuggle.

Man who ran over officers remanded