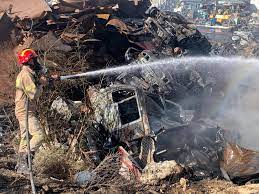 File photo: A firefighter at work during a fire at a scrap mental facility last October

The fire department said on Wednesday that statistics published on Tuesday showing that Cyprus has the second highest percentage of professional firefighters in the EU were misleading.

According to a study published by Eurostat, covering data from 2021 365,100 people were employed as professional firefighters in the EU in 2021, representing 0.2 per cent of total EU employment.

With firefighters making up around 0.4 per cent of their workforces, Estonia, Cyprus, Romania, and Slovakia recorded the highest share of firefighters among member states, it said.

However, on Wednesday, an announcement from the fire service said the figures were wrong.

it said that the Eurostat figures were counting in firefighters from the forestry department and the game service, which both deal only with rural fires.

The Eurostat percentage, the announcement said would translate into 1,622 firefighters, which is not the case.

“We would like to clarify that professional firefighters of the Republic of Cyprus who are employed in the fire service number 737 organic positions, including approximately 100 who serve at the airports of Larnaca and Paphos and who are not active in the cities and the countryside,” the fire service said.

“Taking into account the above numbers, the percentage of professional firefighters of the in the Republic, including firefighters serving at airports, is 0.17 per cent which makes it second to last in proportion to the rest of the EU countries.”

It added that according to Eurostat definitions, a professional firefighter, which is what they were calculating, “means a firefighter who has successfully completed a three-year cycle of academic studies and who has the training and knowledge, to protect life and property”.

The fire department has been having issues with the government about boosting their numbers in recent years and have threatened strike action on a number of occasions.