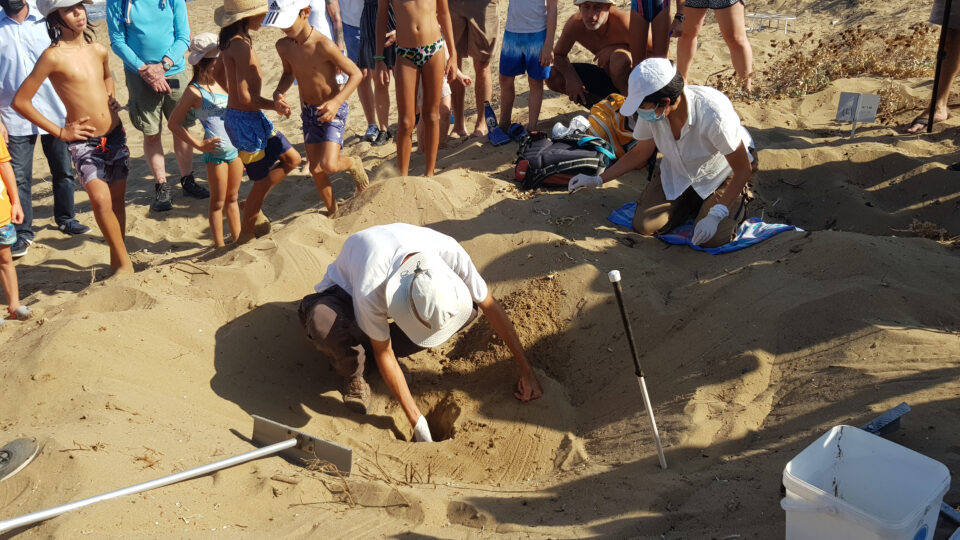 More than 2,000 sea turtle nests were located in Cyprus in 2021, Simos Demetropoulos, a biologist-environmentalist, told CNA.

Demetropoulos and Italian Angela Mastrogiacomo, the biologists of the Mediterranean Turtle Research and Conservation Society with other members of the society, and the technical support of Polis Chrysochous youth association are working for the protection of turtles.

Speaking to CNΑ about the Caretta caretta turtles, which are classified as ‘vulnerable’, Demetropoulos said he had been working for their protection in the last 40 years and in the last few years is for the scientific programme for the protection of the turtles.

Together with his Italian colleague, they are carrying out studies related to the programme, visiting the west shores of Akamas, from Toxeftra to Lara and also Polis Chrysochous to the north which are the main areas. They also visit other areas.

The programme is assisted by the Fisheries Department. Special cages for the protection of the nests are placed in some parts to protect thee turtles from humans as well as foxes.

Last year, Demetropoulos said, more than 2,000 nests belonging to Chelonia mydas (green turtle) and Caretta caretta turtles were located at the Polis Chrysochous Bay and the west coast. The Green Turtle, classified as ‘endangered’, mainly gives birth in the western region of Akamas and not in the other areas.

He urged the public to realise that turtles were significant species, and their protection enabled the protection of more species and habitats, both in and out of the sea, that were associated with the turtle. While he appreciated that people want to see the turtles however, they had to understand that the “turtles do not want to see us. They need their peace while people’s curiosity unintentionally causes damage”.

Demetropoulos said their survival depends on peaceful surroundings and therefore if people want to protect them, they need to respect their needs.

Andreas Pistentis, former district officer of the Fisheries Department, who is still involved with the protection of turtles, told CNΑ that the programme began in 1976. After locating the beaches which the turtles prefer, in 1978 the first station was set up in the Lara area.

He said both Chelonia mydas and Caretta caretta turtles visit this particular area. The findings were registered daily while a meteorological station was also set up with thermometers monitoring temperatures, the winds and waves.

Pistentis urged the pubic to protect the turtles and not to remain there overnight with bonfires, umbrellas and beds because apart from destroying the nests, the sand’s temperature is altered thus affecting the eggs.

Koula Michael, director of Terra Cypria -the conservation foundation which operates The Cyprus Environmental Studies Centre – said the fact that these turtles come to hatch in Cyprus was a blessing itself.

She referred to the memorandum of cooperation signed with the Fisheries Department regarding sea turtles, allowing the foundation to have an active role in the protecting sea turtles on the island through the training of volunteers and academic foundations.

“With our involvement and with the cooperation of the team which monitors the species in Cyprus, as well as the guidance of the Department of Fisheries and Marine Research, we look forward to strengthening actions for raising awareness, preserving and protecting the sea turtles on the island, benefiting local communities and to enrich our knowledge about this very important species of animal”, she added.

“We can all work together to protect and promote the Cyprus sea turtles and this is a promise”, she noted.

“We want to promote turtle tourism the right way”, said Michael, and this can only be done with the involvement and cooperation of all associations working together.