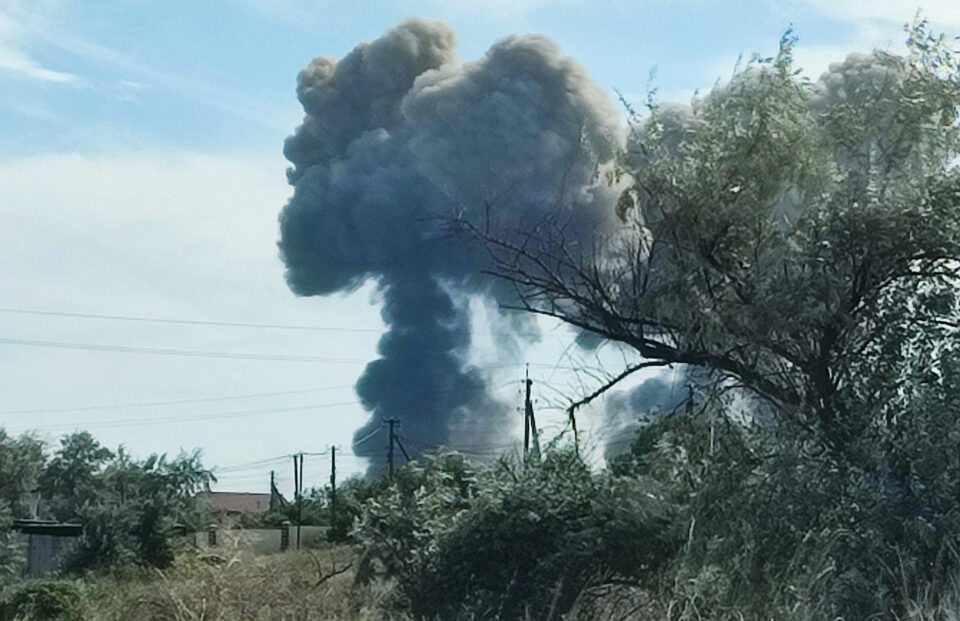 Smoke rises after explosions were heard from the direction of a Russian military airbase near Novofedorivka, Crimea August 9, 2022. REUTERS/Stringer

A senior Ukrainian official suggested a series of explosions at a Russian air base in Crimea could have been the work of partisan saboteurs, as Kyiv denied any responsibility for the incident deep inside Russian-occupied territory.

The adviser to President Volodymyr Zelenskiy also suggested Russian incompetence as a possible cause of Tuesday’s blasts. They killed one civilian and injured eight, according to the health department in Russia-annexed Crimea.

Huge plumes of smoke could be seen in videos posted on social media from Crimea, a holiday destination for many Russians. Russia annexed the Crimean peninsula from Ukraine in 2014 and used it in February as one of the launchpads for its invasion.

Mykhailo Podolyak, asked by the Dozhd online television channel whether Kyiv was responsible, replied: “Of course not. What do we have to do with this?”

“People who are living under occupation understand that the occupation is coming to an end,” Podolyak said.

Moscow said the explosions, at least 12 according to witnesses, were detonations of stored ammunition, not the result of any attack.

Zelenskiy did not directly mention the blasts in his daily video address on Tuesday but said it was right that people were focusing on Crimea.

“We will never give it up … the Black Sea region cannot be safe while Crimea is occupied,” he said, repeating his government’s position that Crimea would have to be returned to Ukraine.

There were lingering concerns about the situation at the Russian-occupied Zaporizhzhia nuclear power plant in southern Ukraine after each side accused the other of shelling in recent days.

It was vital for the Kyiv government to regain control of the plant in time for winter, Petro Kotin, head of Ukraine‘s state nuclear power firm Energoatom said in an interview with Reuters.

Last week’s Russian shelling had damaged three lines that connect the plant to the Ukrainian grid, he said. Russia wanted to connect the facility to its grid, Kotin said.

Both Ukraine and Russia have said they want technicians from the U.N.’s nuclear watchdog, the International Atomic Energy Agency (IAEA), to visit Zaporizhzhia, the biggest nuclear power plant in Europe.

Russia has asked for IAEA chief Rafael Grossi to brief the U.N. Security Council on Thursday on Moscow’s accusation of attacks by “the Ukrainian armed forces on the Zaporizhzhia nuclear power plant and their potential catastrophic consequences,” diplomats said.

Ukraine has denied the Russian assertion that its forces attacked the plant.

In the northern town of Bucha, 15 bodies were buried on Tuesday after they were found four months after Russian forces withdrew from the area.

“All the people who were shot and exhumed from a mass grave have torture marks on them,” Bucha Deputy Mayor Mykhailyna Skoryk told reporters.

Ukraine and its allies accuse Russian forces of committing atrocities in Bucha, a satellite town of the capital Kyiv, after beginning its invasion on Feb. 24. Russia denied the allegation.

What Moscow calls a “special military operation,” Ukraine and its allies say is an unprovoked imperial-style war of aggression and it is banking on sophisticated Western-supplied rocket and artillery systems to degrade Russian supply lines and logistics.

U.S. President Joe Biden on Tuesday signed documents of Washington’s support for Finland and Sweden joining NATO, the most significant expansion of the military alliance since the 1990s and prompted by Russia’s invasion of Ukraine.