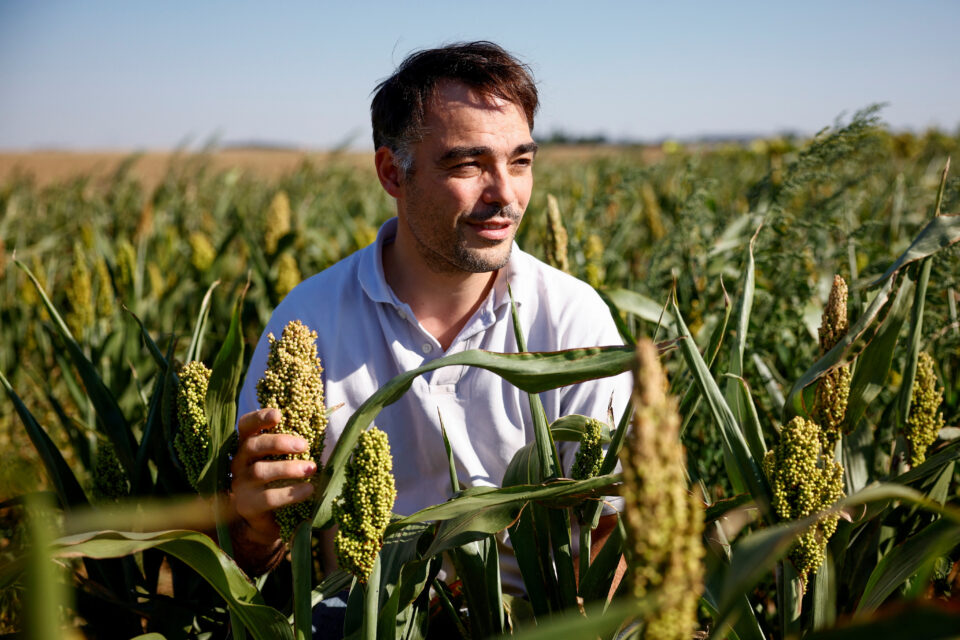 French farmer Eudes Coutte poses during an interview with Reuters in a sorghum field near Saint-Escobille, France

Corn plants near Paris are stunted and the soil of harvested wheat fields is bone dry, but on Eudes Coutte’s sorghum plot the leaves are green and the plants carry a full ear of grains.

Four years ago, Coutte and his brother started growing sorghum, a cereal that is little-known in Europe but used widely in other parts of the world and can be an ingredient for gluten-free baking, couscous or even beer.

For Coutte, the advantages of sorghum are that in much of France it does not need to be irrigated, requires no pesticides and needs only a third of the fertiliser that wheat requires.

“Sorghum allows for a new kind of agriculture, more sustainable, as it preserves resources,” said Coutte, 40, standing in a field of waist-high sorghum in Saint-Escobille, 75 km south of the French capital. “We must think about tomorrow’s agriculture, and how we can produce food without massive water use.”

Under the extreme heat of 2022, even sorghum yields will be impacted, and he expects yields this year to fall to three-four tonnes per hectare, compared to five-six tonnes during a normal year.

But the fact that this yield requires no irrigation north of the river Loire is a “competitive advantage,” he said as drought is felt across France, with restrictions on access to water.

In a bid to make his farm more sustainable, Coutte has invested in his own stone mill, which turns part of his crop into gluten-free sorghum flour. He sells the rest as grains, which can be cooked and eaten like lentils.

Gluten-free sorghum is rich in protein and contains eight out of nine essential amino acids, he said, but in Europe it is still a niche market.

With more farmers like the Coutte brothers turning to this crop, French sorghum production grew to nearly 400,000 tonnes in 2021 from 244,000 tonnes in 2016, farm ministry data show.

Of the nearly 800,000 metric tonnes of sorghum produced in Europe in 2021-22, only about a quarter will be for human consumption, the rest mostly for animal feed, EU data show.

Strategie Grains crop analyst Vincent Braak said that sorghum has gained ground in Europe in recent years but is still struggling to find a market, which is not as developed as for corn and other cereals.

“But as summers are getting hotter and hotter, we can expect that more farmers will start growing sorghum to replace some of their corn,” he said.

The Couttes are working hard to find new markets for their crop. In coming years the brothers plan to work with local partners to develop sorghum beer, vegetarian sorghum steak and other products.