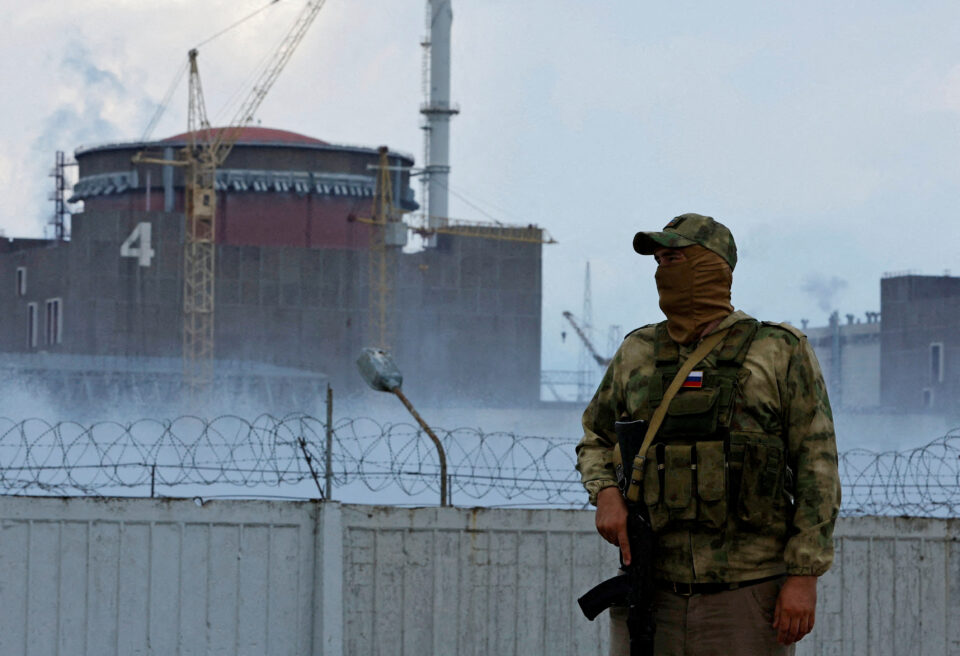 FILE PHOTO: A serviceman with a Russian flag on his uniform stands guard near the Zaporizhzhia Nuclear Power Plant in the course of Ukraine-Russia conflict outside the Russian-controlled city of Enerhodar in the Zaporizhzhia region, Ukraine August 4, 2022

Russia said on Thursday it could shut down Europe’s largest nuclear power station after it came under shelling at the front lines in Ukraine, a move Kyiv said would increase the risk of a nuclear catastrophe there.

Moscow also rejected international calls for a demilitarised zone around the Zaporizhzhia nuclear power plant, which it seized early in the war and which is still operated by Ukrainian engineers under Russian occupation.

Ukrainian President Volodymr Zelenskiy, who discussed the situation at the plant with visiting U.N. Secretary-General Antonio Guterres in Lviv, called on the United Nations to ensure that it was demilitarised and protected.

“This deliberate terror on the part of the aggressor can have global catastrophic consequences for the whole world,” Zelenskiy wrote on the Telegram messaging app, accusing Russia of “nuclear blackmail” at the plant.

The power station sits on the Russian-controlled south bank of a huge reservoir; Ukrainian forces hold the north bank. Recent days have seen several incidents of shelling at the plant, which both side blame on each other.

Ukraine also accuses Russia of using the plant as a shield for its forces to launch strikes across the reservoir on Ukrainian-held cities, which Moscow denies.

Foreign countries and the United Nations have called on Moscow to allow in international inspectors. Reuters cannot independently confirm the military situation there or responsibility for shelling of the plant.

Russia’s foreign ministry spokesperson said on Thursday calls for a demilitarised zone around the plant were “unacceptable”. The defence ministry said Moscow could shut the plant down if it came under further attack.

Ukrainian officials have accused Russia of planning to shut the plant to sever it from Ukraine’s power grid and switch it over to Russia’s — effectively stealing its output.

Ukrainian state nuclear energy company Energoatom said shutting down the plant would increase the risk of “a radiation disaster at the largest nuclear power plant in Europe”.

Disconnecting the complex’s generators from Ukraine’s power system would prevent them being used to keep nuclear fuel cool, in the event of a power outage at the plant, it said.

Russia’s defence ministry accused Kyiv of planning some form of incident at the nuclear plant as a “provocation” to take place during Guterres’ visit. A Ukrainian official dismissed what he depicted as a cynical assertion by Moscow.

The last time Guterres visited Ukraine, in April, Russia fired missiles into a residential building in Kyiv, wounding at least 10 people just as Guterres wrapped up talks with Zelenskiy nearby. At the time, Guterres called the incident “shocking” and Ukraine accused Moscow of seeking to humiliate the United Nations. Russia denied targeting civilians or timing its attack intentionally to coincide with the visit.

Shutting down a nuclear power plant is a complicated operation that requires halting nuclear chain reactions while protecting fuel from heating up and causing a meltdown.

“Should Russia take actions to force (the plant) off the Ukraine power system, that could threaten the operational safety of the station, in addition to escalating Ukraine’s energy crisis into the winter,” Mark Hibbs, senior fellow at the Nuclear Policy Program at the Carnegie Endowment for International Peace, told Reuters in an email.

In a briefing, Igor Kirillov, head of Russia’s radioactive, chemical and biological defence forces, said the plant’s back-up support systems had been damaged as a result of shelling. He presented a slide, showing that in the event of an accident, radioactive material would cover Germany, Poland and Slovakia.

Ukraine’s foreign minister, Dmytro Kuleba, said he had spoken to the director general of the International Atomic Agency, who was ready to lead a delegation to the plant.

“I emphasised the mission’s urgency to address nuclear security threats caused by Russia’s hostilities,” he said on Twitter.

Turkey’s President Tayyip Erdogan was also expected at the talks with Guterres and Zelenskiy in Lviv, to discuss progress resuming exports of Ukrainian grain under a deal brokered by the United Nations and Ankara to lift a Russian blockade. Both Russia and Ukraine are major food producers, and the blockade has threatened to exacerbate global hunger.

Guterres was also expected to discuss the U.N. role in negotiations over prisoners of war. Relatives of Ukrainian troops who surrendered at the Azovstal steel factory in Mariupol under a U.N.-backed deal staged a demonstration during Guterres’s visit calling for more efforts to protect them.

Dozens of the Azovstal prisoners died in custody of Russian-backed separatists last month in a fiery blast at a prison. Kyiv called it a massacre and a war crime; Moscow accused Ukraine of having struck the prison with rockets, though it provided no explanation for why no guards were hurt. The same day, Russia’s embassy in Britain issued a tweet saying the Azovstal prisoners “deserve a humiliating death”.

After months in which Russian forces made modest territorial gains in heavy fighting in the east, front lines in Ukraine have been comparatively static in recent weeks.

Kyiv says it is preparing for a counterattack to recapture a swath of southern territory, including Kherson province and neighbouring Zaporizhzhia where the plant is located.

The war has killed thousands and forced millions to flee. Moscow says its aim is to demilitarise Ukraine and protect Russian-speakers on land President Vladimir Putin says historically belongs to Russia.

Kyiv and the West call it an unprovoked war to conquer Ukraine and erase its thousand-year national identity.