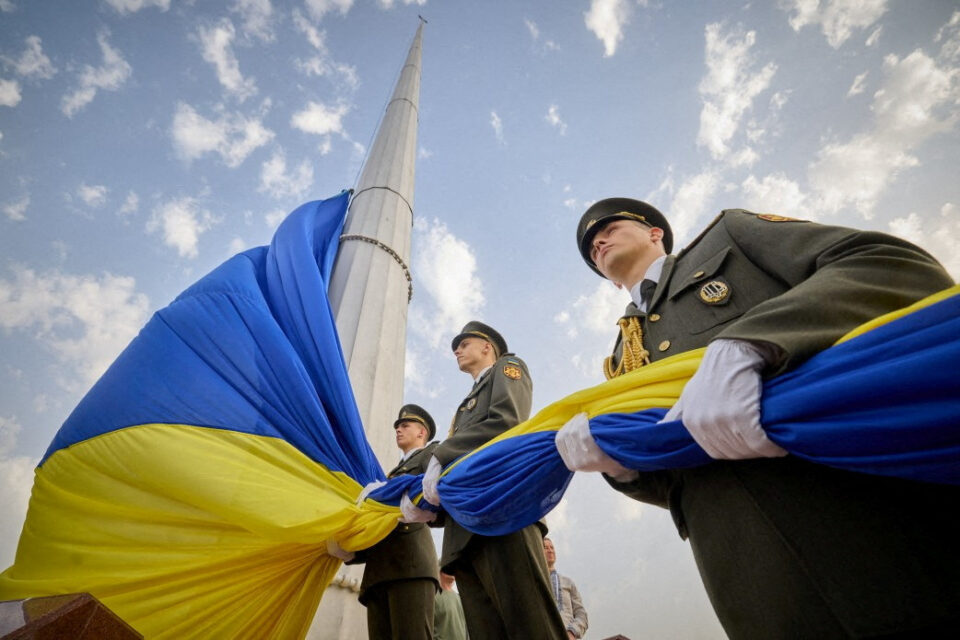 Members of the Honour Guard attend a rising ceremony of the Ukraine's biggest national flag to mark the Day of the State Flag, amid Russia's attack on Ukraine, in Kyiv

On August 24, 2022 Ukrainians celebrate Independence Day, marking the 31st anniversary of the country’s declaration of independence.

It was our biggest national holiday, celebrated by millions of Ukrainians at home and abroad. Unfortunately, not this year.

Today, millions of Ukrainians – servicemen, territorial defence troops, volunteers – have been courageously resisting Russian aggression. Tens of thousands have lost their homes, their relatives and loved ones. Millions have been forced to leave their homes and their motherland. The word “independence” has acquired a deeper meaning for all Ukrainians across the globe. Along with the war came an understanding that Independence cannot be taken for granted, we need to defend it. Today, Ukraine and Ukrainians symbolise the struggle for freedom, the true courage in defending democratic values.

Nearly 21 per cent of Ukraine’s territory with more than 2,600 towns and villages is occupied by Russia. In the recently occupied areas, Russia reproduces the same patterns it has been using in the Crimea and parts of the Donbas since 2014: appoints occupation administrations, imposes Russian passports and recruits Ukrainian men into the Russian armed forces.

Kremlin undertakes preparations for fake referendums to legalise occupation and justify further annexation of the temporarily occupied territories of the Kherson and Zaporizhzhia regions. Setting conditions for the fake referendums remains so problematic that the occupation authorities have even seemingly abandoned plans to hold them on September 11. Ukrainian citizens refrain from receiving Russian passports and continue leaving the occupied areas. Mock “voting from home” and “voting by Internet” are now part of Russian plans as the local residents refuse to vote in the sham Russian referendums.

While destroying civilian infrastructure and blocking evacuation of civilians from the occupied territories to the government-controlled parts of Ukraine, the Kremlin engages in the forcible deportation of Ukrainian citizens to the territory of Russia, Belarus and the occupied Crimea. The scale of this crime is astounding: over 2.45 million Ukrainians are reported to have been transferred (forcibly or through Russian evacuation) from southern and eastern regions of Ukraine to Russia and the Crimea. Almost 300,000 Ukrainians were rescued through the humanitarian corridors. Those who remain in the occupied territories are subjected to the so-called “filtration camps”, in which families are separated and those who are deemed “unreliable” disappear. Only around 16,000 deported citizens were able to return to the government-controlled parts of Ukraine.

The population of the Russian-occupied areas of Ukraine continues to fiercely resist the occupation showing civil disobedience and conducting partisan sabotage acts, thus undermining Russia’s efforts to establish coherent control. The occupation authorities are desperately trying, with no success, to find sufficient numbers of local residents willing to participate in pro-Russia demonstrations. Russia is forced to bring its own citizens and officials to the occupied territories of Ukraine to ensure even the basic tasks are carried out.

By deliberately attacking civilian infrastructure and terrorising the population, Russia seeks to destroy Ukraine’s economy, to make Ukraine a “failed state”, which would not be able to resist its pressure. Every single day of the war makes the situation worse.

Facing the full-scale Russian invasion, the Ukrainian state managed to preserve not only its statehood but also maintain the pace of democratic reforms. Despite Russia’s aggression, economic pressure, and information war, Ukraine has persevered as an independent state owing to the resilience and determination of its population to defend its own future. Ukrainian women and men have shown a truly massive readiness to defend their country.

Russia’s war against Ukraine is a threat to all democratic nations of the world.

These days the world is witnessing the growing risk of a nuclear disaster because of Russia’s military seizure of the world’s third largest nuclear power plant in Energodar, Zaporizhzhia region. This is nothing less than a nuclear blackmailing. The so-called “neutral position” taken by some states is only provoking the aggressor to continue its attacks. Russia’s actions must be clearly and unconditionally condemned.

Sanctions work and their effect on Russia’s economy will further increase. Recently, some EU member states had proposed a bloc-wide ban on visas for Russian citizens in response to the Kremlin’s invasion of Ukraine. Ukraine supports this initiative.

The truth is sobering – Russians overwhelmingly support the war on Ukraine, cheer missile strikes on Ukrainian cities and the murder of Ukrainian citizens. They must be deprived of the right to cross international borders until they learn to show some respect for people.

This is Russia’s, not just Putin’s war. It is not Putin, but Russian soldiers that come from Russia to kill, torture, rape and destroy.

Russians who are upset with the prospect of being banned from travelling to Europe can direct their complaints to the Kremlin and over 70 per cent of their compatriots who support the war. No one proposes to ban those Russian citizens who seek asylum or entry for humanitarian reasons.

Only Ukraine and its people will decide when and how the war will end and how peace with Russia can be reached. Eighty-nine per cent of Ukrainian citizens believe that the war must end with complete liberation of Ukraine’s territory within the internationally recognised borders. This would also be a safeguard against any further war.

We urge partners to step up efforts to help Ukraine defend itself and prevail over the invaders.

Ruslan Nimshynskyi is the ambassador of Ukraine to Cyprus