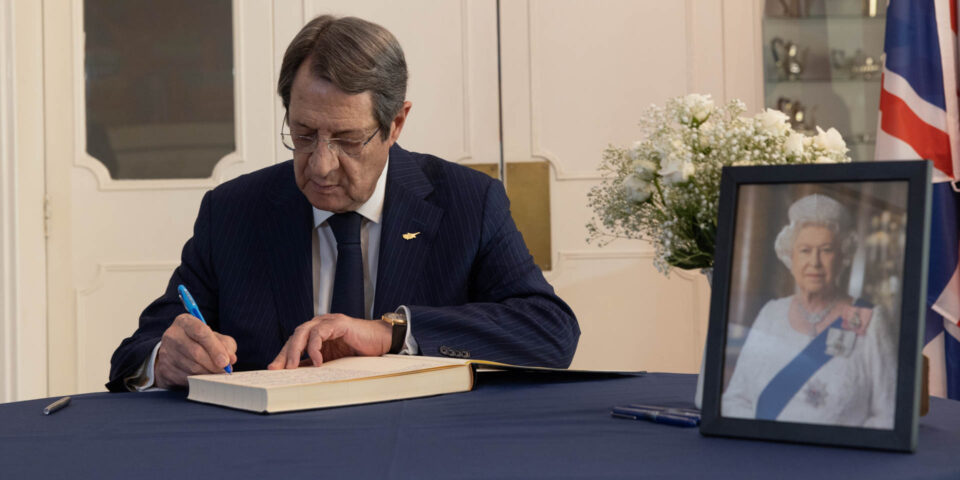 President Nicos Anastasiades on Monday said hopes the close relations between Cyprus and the UK will continue, as he signed today the book of condolences for the death of Queen Elizabeth II, which has been opened at the British High Commission.

Anastasiades also expressed his personal deep sorrow at the passing of the British monarch.

“It is with great sadness that I convey our deepest condolences on behalf of the people and the Government of the Republic of Cyprus, as well as on my own behalf and the First Lady, on the passing of Her Majesty Queen Elizabeth II,” he wrote.

“During Her Majesty’s 70 years of reign, we witnessed the further enhancement of the historical ties between Cyprus and the United Kingdom, both bilaterally as well as within our Commonwealth Family of Nations.

“Queen Elizabeth II will always be remembered for Her dedication and commitment to public service as well as Her love and devotion to Her Family.

“At these difficult moments of mourning and grief, I would like to extend our heartfelt sympathy to His Majesty King Charles III, the Queen Consort, the members of the Royal Family and the people of the United Kingdom of Great Britain and Northern Ireland.”

Anastasiades said in a short discussion with Siddiq he was able to express his wish that the relations between the two nations deepen.

He said this would lead to studying a way for the UK to get involved in creating conditions for the resumption of talks.

Siddiq said the death of the queen was “a huge loss for the people of the United Kingdom, the Commonwealth and for many others around the world”.

He thanked Anastasiades for signing the condolences book and said he hoped their next meeting would be in happier circumstances.

“An important part of our UK-Cyprus partnership is through the Commonwealth; that group of nations to whom Her Majesty so loyally and dutifully served for over 70 years,” Siddiq added.

“I thank the people of Cyprus for your support and messages at this sad time. Our High Commission condolence book will remain open to the public this week for all those wishing to pay their respects.”

On his arrival at the British High Commission to sign the book, he was received by Siddiq. Tatar wrote the following in his book of condolences: “On behalf of the ‘TRNC’ and the Turkish Cypriot ‘people’, we share your deep sorrow at the death of Queen Elizabeth II. I extend my sincere condolences to King Charles III, all members of the Royal Family, the people of the United Kingdom and the Commonwealth.”

The Turkish Cypriot leader also wrote that “Queen Elizabeth II will be remembered as a person who dedicated her life to the service of her country and her people, supporting charities and diverse communities, and as a source of strength and inspiration to the world.

“In this time of mourning, our prayers are with King Charles III, the Royal Family and the people of the United Kingdom. May the soul of Queen Elizabeth II rest in peace,” Tatar added.

Elizabeth died on September 8 at Balmoral Castle in the Scottish Highlands. She was 96.