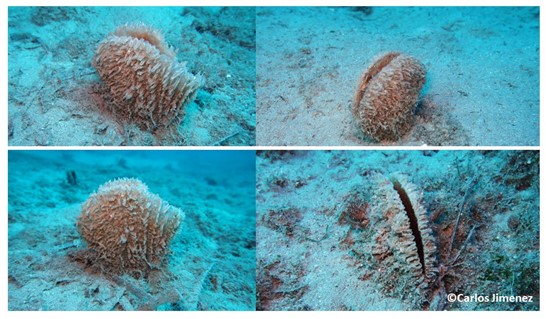 The fan mussel Pinna nobilis has been an emblematic species of cultural and dietary importance to Mediterranean people since ancient times. But apart from that, the species is known to have a critical biological role in the marine environment. This animal is the largest endemic bivalve species of the Mediterranean Sea, reaching a size of up to 120cm. It has a key ecological role of filtering water and retaining organic matter, thus contributing to water clarity. Pinna nobilis also creates three-dimensional hard structures which could host up to approximately 146 different species. This occurs at depths until 60m, on different substrata, but mostly within Posidonia oceanica meadows, one of the most important ecosystems of the Mediterranean Sea. Posidonia oceanica dissipates wave energy and wave-induced flow, limiting the dragging of Pinna nobilis, and it provides a suitable substrate for the bivalve. In addition, Posidonia oceanica is a good biological indicator and plays an important role in the coastal ecosystem, supplying oxygen, providing a shelter and nursery area for many species, consolidating the sea bottom and preventing coastal erosion.

Pinna nobilis has been exploited since antiquity for the production of fabric from its byssus threads, known as “sea silk’’. The shells were collected to make buttons, jewellery items, or knife handles as well as for decoration as floor lamps or to serve seafood on in restaurants. Also, the species represented a food source in some Mediterranean regions. Xenocrates considered more delicate the animals collected in shallow waters, protected from the wind and receiving fresh water. They were cooked in oil, honey and wine.

Other major threats affecting this animal in the past included habitat degradation, illegal trawling, coastal construction, boat anchoring, illegal extraction, and pollution, but currently, Pinna nobilis is at risk as never before. An ongoing mass mortality, caused by different pathogens (e.g., Haplosporidium pinnae), is pushing it to an extremely worrying status. The mass mortality was first reported along the south-eastern coastline of Spain and in the Balearic Islands in 2016 and it rapidly spread throughout the Mediterranean Sea with mortality rates of 80-100 per cent across many regions. Thus, due to this dramatic decline in population size, Pinna nobilis has been listed as Critically Endangered on the International Union for Conservation of Nature (IUCN) Red List in 2019.

The conservation of the species demands monitoring programmes and exchange of information among all Mediterranean countries. In Cyprus, the project entitled ‘Assisted recruitment of the critically endangered fan mussel Pinna nobilis in Cyprus (eastern Mediterranean)’, funded by The Mohamed bin Zayed Species Conservation Fund, started in 2021, thus joining the conservation efforts that have already been carried out in other Mediterranean countries. Efforts have been made in this project to detect any living individuals through diving surveys in many different areas around Cyprus and to naturally support the recruitment of Pinna nobilis larvae but with no success. The preliminary results of the project support that Pinna nobilis is possibly locally extinct as neither larvae nor living individuals were recorded.

Nevertheless, there is always the probability of undetected larvae in the water column, or living individuals, or even communities, which have eluded detection.  In consequence, there is the possibility of larvae arriving from unknown ‘donor sites,’ assisting in the establishment of new Pinna nobilis communities in Cyprus. Therefore, it is important to continue efforts and collection of data, thus increasing our knowledge on the current status of Pinna nobilis in Cyprus.

We call everyone who sees this majestic mussel to contribute to our conservation efforts, by filling in the online questionnaire (available here: https://ee.kobotoolbox.org/x/UCK0P543) which has been developed to gather information about any possible living Pinna nobilis mussel around the island of Cyprus.

In conclusion, we would like to highlight the importance of the continuation of this study and the need to be expanded on a larger scale across the island. It is essential to take urgent protection actions if we want the fan mussel to return, one day, to thrive again in the Levantine Sea.

Our View: Will uniting independents provide something new for Cyprus elections?