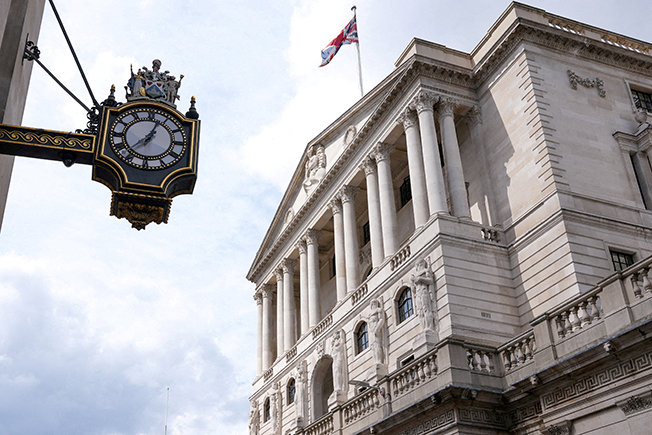 A general view of the Bank of England building, in London

The Bank of England raised its key interest rate to 2.25% from 1.75% on Thursday and said it would continue to “respond forcefully, as necessary” to inflation, despite the economy probably already being in a shallow recession.

The central bank cut its forecast for the peak in British inflation to just under 11% from more than 13%, following Prime Minister Liz Truss’s plan to cap energy prices, but warned that the policy could create longer-term price pressures.

Economic demand was likely to be stronger thanks to the energy price cap, the BoE said, but in the immediate term it cut its forecast for the three months to September to show a fall of 0.1%, down from growth of 0.4% forecast in early August.

The drop is partly due to the extra public holiday for Queen Elizabeth’s funeral. Combined with a fall in output in the three months to June, these two successive quarters of contraction meet the common definition of a technical recession.

The BoE rate rise follows the U.S. Federal Reserve’s decision on Wednesday to raise its key rate by three quarters of a percentage point, as central banks worldwide grapple with post-COVID labour shortages and the impact of Russia’s invasion of Ukraine on energy prices.

“The Bank of England … continues to look like something of a laggard compared to international peers, which is likely to keep the pound under selling pressure,” said Luke Bartholomew, senior economist at investment company abrdn.

Sterling fell against the U.S. dollar GBP= after the decision but stayed above the 37-year low close to $1.12 hit earlier in the day.

Economists polled by Reuters last week had forecast a repeat of August’s half-point increase in rates, but financial markets had bet on a three-quarter-point rise, the biggest since 1989, apart from a brief, failed attempt in 1992 to support sterling.

British government bond prices fell sharply, but investors slightly pared back their expectations for rate rises. Futures show BoE interest rates reaching 3.5% by the end of the year and peaking at 4.75% in mid-2023 – a quarter point lower than before the decision.

“Should the outlook suggest more persistent inflationary pressures, including from stronger demand, the Committee will respond forcefully, as necessary,” the BoE said, using a similar form of words to previous months for its policy intentions.

The MPC also voted unanimously to reduce the BoE’s 838 billion pounds of government bond holdings by 80 billion pounds over the coming year, by continuing to let bonds mature and through active sales, which will start next month.

This is in line with the goal it stated in August, and makes the BoE the first major central bank to start selling off the bonds bought during more than a decade of quantitative easing.

British consumer price inflation hit a 40-year high of 10.1% in July and dropped to 9.9% in August. The BoE said it expected inflation to remain above 10% for several months after its October peak.

In a scheduled letter to new finance minister Kwasi Kwarteng, explaining why inflation was so far above the BoE’s 2% target, Governor Andrew Bailey said Russia’s invasion of Ukraine was a major cause, but an unexpectedly tight domestic labour market was another factor.

British unemployment fell to its lowest since 1974 in the three months to July at 3.6%.

On Friday, Kwarteng will give more detail about the government’s fiscal plans, which may amount to more than 150 billion pounds of stimulus, just over half from the domestic energy cap.

“All else equal … this will add to inflationary pressures in the medium term,” Bailey told Kwarteng about the cap.

Kwarteng said Bailey and the BoE’s 2% inflation target had his full support, and that government efforts to support growth would increase the economy’s room for non-inflationary expansion.

The BoE said it would assess the policy implications of the government’s full range of measures at its November meeting.