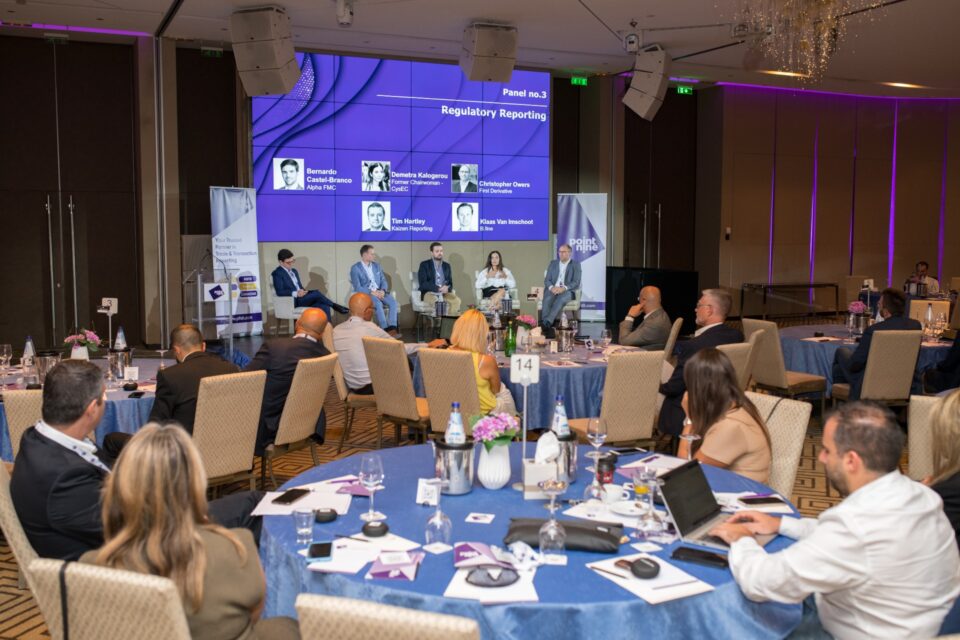 Cypriot company Point Nine this week announced that its third annual conference was successfully held at the Four Seasons Hotel in Limassol on Friday, September 16, attracting a number of stakeholders from the international regulatory compliance sector.

In one of the largest gatherings of executives from the field of regulatory compliance services, participants had the opportunity to attend prestigious speakers from leading international companies such as FIS Global, Kaizen Reporting, b.fine, Alpha FMC, First Derivative, as well as top executives from local banks and other financial sector firms.

Emphasis was placed on transactional regulatory compliance issues, the latest regulatory developments in the financial and professional services sectors, as well as the latest technology upgrades shaping the industry.

Interest was also shown in the practical workshop regarding the revised provisions of the EMIR Refit Directive, due to be implemented both in the European Union and in the United Kingdom in the early months of 2024.

In addition, the Director General of the Ministry of Finance, George Pantelis and the Executive Member of the Board of Directors of the Central Bank of Cyprus, Maria Heracleous, also addressed the conference.

The Chairman of the Board of Directors and one of the founders of Point Nine, Yannis Matsis, greeted the conference and made special mention of the importance of regulatory compliance in a rapidly changing environment, highlighting its contribution to safety and the prevention of unwanted situations.

Point Nine CEO Andreas Roussos expressed his satisfaction with the strong participation and the intense interest shown, as well as for the useful conclusions that were drawn during the event, both from the speeches delivered and the discussions that took place, and the aforementioned specialised workshop.

“It is with particular joy and satisfaction that we welcomed friends and partners to the conference,” Roussos said.

“The presence of important executives from international organisations constitutes an honour for us at Point Nine, and at the same time confirms the recognition enjoyed not only by our company, but also by Cyprus as a centre for the provision of outstanding professional services,” he concluded.

State-owned asset management company Kedipes this week announced that its third-quarter repayment amount to the state, as part of its state aid repayment programme, will amount to €60 million in total.

Following the repayment amount for the third quarter of 2022, Kedipes’ state aid repayments have reached a total of €800 million since the company’s creation in 2018.

Last year, Kedipes paid €250 million in state aid for the entirety of 2021, with fourth quarter repayments amounting to €60 million.

The Sewerage Board of Limassol (Sala) this week announced that it has signed a collaborative agreement with the Cyprus University of Technology’s (Tepak) department of chemical engineering.

“The agreement seeks to establish the formal cooperation of the two organisations in various areas of common interest,” the board said in a statement.

“The purpose of this agreement is to define the charging and invoicing methodology for exceeding the quality of industrial waste discharged into Limassol’s public sewage system, in order to achieve the effective implementation of the European ‘polluter pays’ principle, to serve the public interest and provide research and development opportunities for the university’s chemical engineering department,” it added.

Both organisations expressed their belief that the implementation of the agreement will be mutually beneficial and help both the university and the board achieve their goals.

The general Cyprus Stock Market Index was at 75.03 points at 13:30 during the day, reflecting a rise of 0.78 per cent over the previous day of trading.

Fiscal Council: ‘next state budget should focus on building resilience’

EU ministers agree to press ahead with new Russia sanctions