First impressions can often paint a distorted picture, particularly when it comes to restaurants, however, in this instance they were very much on point. As we were shown to our table at Ousia, one of the first things we noticed was a miniature tin container of cold pressed, extra virgin Cyprus oil in its original packaging, meaning it’s not refilled, but replaced. It’s a small touch, but considering practices in other restaurants, it’s one that I very much appreciated.

Ousia is found along the edge of the medieval castle, in Limassol’s old town. Busy with local residents and international travellers, the area is more often than not quite vibrant, particularly if you opt for an outside table. We decided to stay inside table, the air conditioning being the deciding factor as the weather is still a week or two away from being properly autumnal. Inside, you are greeted by a high, wood-laden ceiling, and white walls mixed with exposed stone, the latter element blending with the castle itself. The decor is decidedly artistic, with various paintings adorning the walls, combined with a few distinct items, including a cello and a lamp made out of a bass trumpet. 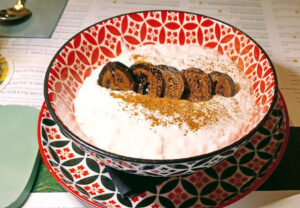 We started the night with a couple of starters – tomato soup and an assortment of Middle Eastern dips. The latter included a bowl of hummus, a bowl of baba ganoush, blended roasted aubergines, as well as a bowl of muhammara, which is a blend of red peppers, walnuts, pomegranate molasses, lemon juice and chilli paste. Of the three, the muhammara, a dish which I hadn’t had before, turned out to be my favourite, and was repeatedly stabbed with the grilled pitta wedges the dips were served with. If the ratio of the pitta to the dips isn’t to your liking, you can have additional bread for a negligible cost. As for the tomato soup, it was perfect, balancing out the primary flavour of the tomatoes with the garlic, basil and onion used to make it. 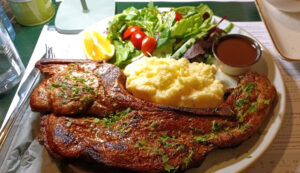 Our mains were grilled yellowfin tuna, one of the day’s specials, as well as the pork chop from the core menu. The tuna was served medium rare-to-medium. It both looked and tasted the part, soft, slightly pink, savoury and fresh, with visible grill marks. It was accompanied by a creamy coconut and parsley sauce and quinoa. Although quite nutritious and aesthetically pleasing on the plate, the quinoa was on the milder side in terms of flavour profile, and can be replaced by something a tad bit more impactful, if that’s what you’re after. The pork chop was one of the larger ones I’ve seen served in recent times and was cooked well, something which is important since overcooking pork can drain out the juices. The restaurant was happy to replace the fries with mashed potatoes. In addition, there was a fair bit of salad on the plate, as well as a ramekin filled with barbecue sauce.

For dessert we decided to share a rizogalo, Cyprus rice pudding, which again came from the special menu. Sharing this was a wise decision since the portion was very much on the generous side. The rizogalo had clear notes of coconut and orange zest, which are always welcome. Also, it came with four slices of karydaki, a Cypriot spoon sweet made with walnut. All in all a pleasant experience, with the value proposition being accurately represented in the restaurant’s pricing, as well as the service you receive, which was warm, receptive and helpful.

Tzitzikas Sings an Apology for children and adults